For those not familiar with NewsBusters, it fancies itself as a conservative media watchdog whose mission is “Exposing and Combating Liberal Media Bias.” It is a subsidiary of the uber-rightist Media Research Center. And it is also one of the most prolific apologists for radical right-wingers and racists like Ann Coulter and Pat Buchanan.

Last week they outdid themselves by posting an absurd item about a bank robber in New Hampshire who wore a mask of President Obama during the robbery. NewsBuster’s Noel Sheppard made the Olympian leap from that incident to the Missouri rodeo last month when a rodeo clown wearing a similar mask went on a racially offensive rant. 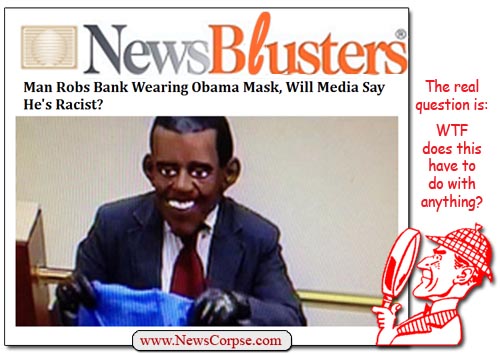 This is a perfect demonstration of how clueless right-wingers are about their own racist tendencies. Sheppard clearly has no idea how offensive it is to perform an allegedly comical routine before hundreds of spectators that calls for grievous harm to befall the president of the United States. His organization ran numerous columns defending the rodeo buffoonery, just as racists of a previous era defended black-face performances.

However, where Sheppard really steps off the plank is when he attempts to draw a comparison between an obnoxious and insulting rodeo act and the criminal behavior of a bank robber. Sheppard seems to think the media has some responsibility to analyze the mind of the criminal for racial insensitivity. The problem is that Sheppard is apparently too stupid to grasp that the crook wasn’t making any kind of a political statement. He was merely trying to conceal his identity (in a spectacularly dumb way). Contrast that with the rodeo clown’s routine that openly baited the crowd to cheer for the President getting gored by a bull.

So what does a bank robber wearing an Obama mask have to do with a brazenly offensive performance by an entertainer? You’ll have to ask Noel Sheppard, because no one in their right mind could possibly connect those dots.