When Eric Cantor lost his primary bid to run for reelection to his Virginia congressional seat, he set off a game of musical chairs within the Republican leadership ranks in the House. Today the GOP caucus chose Majority Whip Kevin McCarthy to replace Cantor as Majority Leader. Subsequently, they needed to fill the new vacancy in the Whip’s post. for that role they chose Louisiana Rep. Steve Scalise. 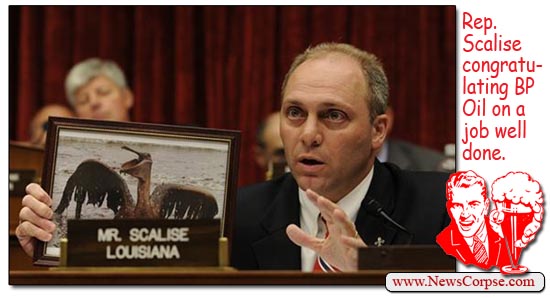 Scalise is regarded as a far-right conservative aligned with the Tea Party. He is currently the chair of the Republican Study Committee, an offshoot of the GOP caucus with an avowed ultra-rightist slant. Wikipedia notes that…

“The organization has long had ties to outside groups closely allied with the most conservative elements of the Republican Party, such as the National Rifle Association, The Heritage Foundation, Focus on the Family, Concerned Women for America and the conservative magazine National Review, as well as the libertarian Cato Institute.”

Last year Scalise authored a resolution that falsely asserted that “a carbon tax would be detrimental to the United States economy” and “to American families and businesses,” and that it would “fall hardest on the poor, the elderly, and those on fixed incomes.” The bill was backed by the Koch brothers who spent heavily on lobbyists to insure its passage.

But for a real taste of the idiocy that is being incorporated into the highest ranks of the GOP elite, you need look no further than Scalise’s speech at the Conservative Political Action Conference (CPAC) last year where he had this to say about Climate Change (video below):

So Scalise is one of those anti-science dimwits who doesn’t know the difference between weather and climate. He believes that the 97% of the scientists who affirm that climate change is real and man-made are perpetrating a hoax. He is an advocate for Big Oil, going so far as to defend BP after the disastrous 2010 calamity in the Gulf of Mexico, saying that “This job killing ban on drilling is causing more problems right now than” the Deepwater Horizon oil spill.

And now he is the Republican Majority Whip and the third highest ranking Republican in the House of Representatives. Well, at least for the next few months, when there will be another vote. If Democrats will get off their duffs and vote in November, we may not need to worry about him or the rest of the Republican Dark Agists.