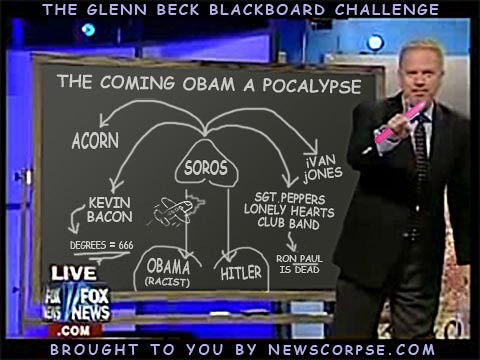 I wonder how this one is gonna go over at the next News Corp board meeting.

On his program yesterday, Glenn Beck embarked on another of his famously illogical rants. This one had something to do with the Israeli encounter with activists seeking to break the blockade in the Persian Gulf. Somehow Beck segued into a discussion of 9/11 and an offer made by a Saudi prince to help with restoration efforts.

Prince Alwaleed bin Talal approached New York’s then-mayor Rudy Giuliani and offered $10 million to help the city recover. Giuliani, in a fit of intolerance, refused the money. In the retelling of these events, Beck hypothesized that the money was tainted and that the Saudi donor was aligned with the terrorists who flew the planes into the World Trade Center towers:

“Do you remember what happened right after 9/11 with Rudy Giuliani? Do you remember Saudi Arabia came and said, we want to help. This guy [pointing at Prince Alwaleed bin Talal al-Saud] came over and said ‘I want to give you a $10 million dollar check.’ Rudy Giuliani said, ‘you see that over there? I don’t think we want your help. You already sent us help. And you flew that help into … the trade centers.‘ The same prince later blamed the U.S. policy for the attacks. Giuliani said, take your check, we don’t want your money.”

I’m not sure how any of that related to the incident in the Persian Gulf. Beck is notorious for constructing incoherent scenarios that reflect nothing more than his hallucinatory imagination. But the real problem here is that the Saudi Prince who Beck explicitly accused of being part of the Al Qaeda gang who attacked Manhattan on 9/11, is actually the largest shareholder of Fox News’ parent, News Corp, other than Rupert Murdoch and members of his family. That makes him Beck’s boss. Prince Alwaleed is also a close friend of Murdoch and former President Bush.

Set aside for the moment that Alwaleed is an international financier who has never been implicated in terrorism or affiliated with terrorists. Thus, Beck’s accusation is the most vile sort of slander. It’s typical of Beck’s hypocrisy that he would fiercely reject the notion of taking any money from this person that he regards as a terrorist, yet Beck is taking money from him every day as an employee of the company that Alwaleed owns a significant portion of. It’s also typical that Beck’s appreciation for facts is so limited as to not even acknowledge this relationship.

So what consequences will there be for Beck calling Alwaleed a terrorist? Beck has survived calling President Obama a racist. He has survived the loss of millions of dollars due to an advertiser boycott. He has survived equating social justice to Marxism and telling his viewers to leave their churches if they practice it. He has survived hosting (and agreeing with) Michael Scheuer, who said that the only hope for America is for Bin Laden to attack us again with weapons of mass destruction. Can Beck survive calling the owner of his network a terrorist?

Murdoch and his henchman, Fox CEO Roger Ailes, are in a difficult position. If they do nothing they risk Alwaleed punishing them by dumping his stock. That would likely result in a plunging value for News Corp shares. If they fire Beck they could unleash a backlash from the Beck Confederacy of Dunces that could result in a massive exodus of their core viewers. Even more troublesome is the potential for violent responses from the aggrieved BeckPods.

If I were forced to make a prediction, I would lean toward everyone doing nothing. The past tells us that Fox News is disinclined to ever acknowledge flaws or wrongdoing. And the major players are all business people who may regard their financial prospects as their highest priority – even Alwaleed. Beck may get a stern talking to, and he may have to promise to be more careful in the future, but I think it is unlikely that he would be terminated over this if he wasn’t terminated over advocating more terrorist attacks on our country.

Perhaps the effect of Beck’s cumulative transgressions may lead to a more severe response, but there’s been no evidence of that in the past. It’s possible that Murdoch may be itching to ditch Beck. He has been attempting to polish his legacy as a serious newspaperman in his golden years. But he could easily be dissuaded from taking action by Ailes and by his fear of the Becklash.

If I’m wrong, and Beck is set adrift, it would be to the credit of News Corp’s management. Although why they didn’t act sooner will still remain a blot on their managerial record. But if I’m right, it would just further affirm Fox’s status as wholly unethical, utterly unprofessional, thoroughly dishonest, and blatantly self-serving. It would reinforce their position that disseminating propaganda is more important than respect for the truth or responsible journalism. Now, which side of that equation do you think Fox would come out on?