The infamous ego of Donald Trump is going to take a severe blow when he gets wind of this. His highly anticipated maiden address to Congress may have enchanted much of the media, but the ratings reveal far less adoration than he will be comfortable with. Even with Brian Kilmeade of Fox News telling him that “you’ll have the biggest audience for a State of the Union-like address this year, bigger than any other year,” reality has a way of intervening.

The Nielsen ratings for Trump’s speech came in at about 48 million. That’s a respectable number for anyone else, but Trump is likely to pound a hole in the Oval Office wall when he finds out. The reason for his outrage will be that he failed to snag the top spot for such events. To make matters worse, he lost to both Barack Obama and Bill Clinton. According to The Hollywood Reporter, “Compared to Obama’s first address in 2009, Trump’s pull is down by 8 percent.” Rankings for first-time speeches to Congress are – Clinton 1993: 66.9 million. Obama 2009: 52.4 million. Trump 2017: 48.0 million. 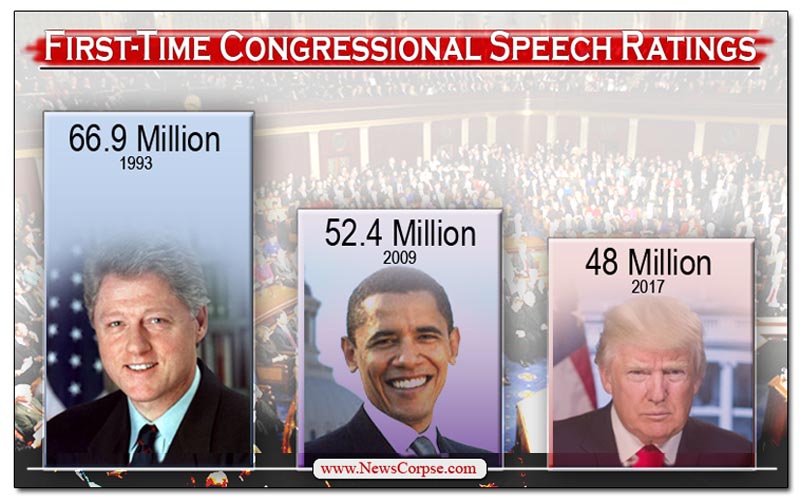 Knowing Trump, one of two reactions can be expected. Either he will lash out at Nielsen and the “fake” ratings establishment that is determined to destroy his presidency. Or he will simply insist that he had higher ratings and everyone tells him so. Then he’ll send Sean Spicer out to confirm it and yell at the press.

Trump flew into a rage after the election when results that showed Hillary Clinton received nearly three million more votes. Defying reality again, Trump insisted that he would have had more popular votes were it not for millions of illegal voters. Then when he delivered his inauguration speech he invented millions of attendees that were invisible to the cameras.

It goes without saying that Trump will be furious when he learns of his latest failure. His handlers may try to keep him from finding out, but someone on Twitter will probably spill the beans. Then just wait for all hell to break loose. Trump is failing in the field he knows best – TV. He previously mocked Arnold Schwarzenegger for not matching his ratings on the new Celebrity Apprentice. Let’s see if Arnold has anything to say about this.

One thought on “Trump’s Gonna Hate This: His Congressional Speech Ratings Fall Below Obama’s”