Fox News was once the dominant news network on cable TV. It was so far ahead of its competition that it seemed unthinkable that it could be challenged. That’s mainly because they corralled all of the Deplorable right-wingers into one barnyard pen, while the rest of the television news was dispersed across many other channels. But it was still a marketing angle they could use as a cudgel against their competitors. 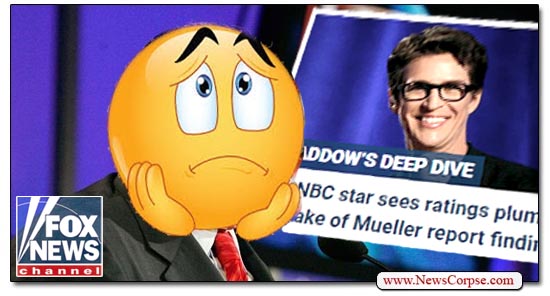 In recent years that domination has has dissipated substantially. And particularly in the past few months, MSNBC has caught up, and quite often surpassed Fox news in the ratings. Rachel Maddow’s program has been crushing Sean Hannity, her direct time period competitor, on a nearly nightly basis ever since the midterm elections last November.

In what seems to be a reaction to the surging performance of MSNBC, Donald Trump took measures to prop up Fox News which acts as his personal, state TV mouthpiece for propaganda. He’s has fervently promoted his fave hosts including Hannity, Laura Ingraham, Tucker Carlson, and Jeanine Pirro. He even did so on Thursday night at his latest cult rally in Michigan. It’s often hard to tell whether Trump thinks he’s working for the American people or for Fox’s PR department.

Fox News has also started to boast about their ratings. They featured a story on their website’s home page that celebrated what they called “Maddow’s Deep Dive.” What makes this extraordinary is that this isn’t the sort of thing that any network does. When was the last time anyone has seen CBS or CNN make a story about their ratings a news item? That’s generally reserved for the TV trade press. But even more embarrassing for Fox is that they have to do this at all. They are effectively conceding that they have been the big losers of late and now are proud that they’ve had a few days where they aren’t in the ratings cellar. It’s an admission that they are underperforming MSNBC and it is therefore cause for joy that they came out on top for a while.

It should be noted that this “success” for Fox News is occurring just after the release of a four page letter by Trump’s plant in the Justice Department, Attorney General William Barr. The letter purports to be a summary of the 400+ page report by special counsel Robert Mueller. But it is a gross misrepresentation of that document by all accounts. And that includes the account of Fox’s senior legal analyst, Judge Andrew Napolitano, who says that there is evidence of conspiracy and obstruction of justice in the full report. So it’s natural for Maddow’s viewers to take a break from what can be considered a slow news cycle, while Fox’s viewers pile in to get their pro-Trump fantasies gassed up.

Whether or not this constitutes a trend in the ratings, or is a temporary blip remains to be seen. But the fact that Fox News was compelled to throw a party simply because they edged out Maddow – who rose from nowhere to become a giant killer – just proves that Fox is worried and has to brag about briefly beating a show that they used to ignore as unworthy of their attention. Maddow and MSNBC are clearly making Fox so nervous that they can’t even hide it. That’s great news for MSNBC.