Apparently Donald Trump hasn’t been ridiculed enough yet for being an ignorant, propaganda mongering, reality TV sloganeer, who is mindlessly attached to his State TV brain trust at Fox News. Fox is a network whose mission is to advance the interests of corporations and the wealthy, along with an agenda of hatred and division. In other words, the social and political platform of Trump’s Republican Nationalist Party. 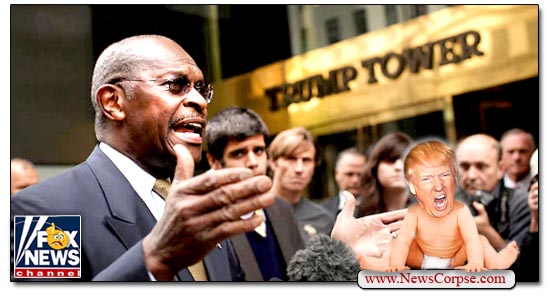 To that end, Trump is reported to be moving forward with his expected nomination of former pizza chain executive, Herman Cain, to the Federal Reserve Board. In many ways he’s the perfect nominee for Trump. He has no relevant experience in the work performed by the Fed. But he shares an embrace of incoherent right-wing myths that have been roundly repudiated by knowledgeable economists. And the two biggest reasons that Trump is tagging him for this post are his ignorance of macroeconomics and his prominent exposure on Fox News.

However, there’s another factor that may be boosting Cain’s profile with Trump. He was accused by multiple women of sexual harassment during his failed bid for the Republican nomination for president in 2012. And if you think that isn’t part of Trump’s recruiting criteria, just remember his support for the GOP Alabama senate candidate, Roy Moore. And his fervent advocacy of Supreme Court Justice Brett Kavanaugh. And his close friendship with Bill O’Reilly. And his partnership with former Fox News CEO Roger Ailes. And his hiring of former Fox News president Bill Shine. Does there seem to be a pattern developing here?

When the sexual harassment controversies began to engulf Cain, Trump was right there to provide immoral support. He defended Cain by maligning the women accusing him of being fame seekers:

“They probably do love their names splashed across the front pages. And frankly, that’s not a good situation and I don’t think it’s a fair situation. And I think Herman should take very, very strong action, even if he has to bring a major lawsuit against the women.”

Of course. Because what do women love more than exposing themselves and their families to media circuses obsessed with their private sexual lives? Trump seems to think that this sort of intrusive scrutiny is every little girl’s dream. He also thinks that Cain was the victim of a now familiar conspiracy that he called “a very ugly witch hunt.”

Trump, of course, is himself the subject of accusations from at least sixteen women who assert that he harassed, and even assaulted them. And he has similarly defended himself by making spurious charges against his victims. But he has never taken the advice he gave to Cain by suing his accusers. Although he swore that “All of these liars will be sued after the election is over.” Perhaps he doesn’t have enough lawyers to handle that as well as the problems emerging from his conspiracy with Russia and the subsequent obstruction of justice.

It’s curious that Trump would choose now to wade into these waters that are so perilous to his own reputation (or lack thereof). He has taken to mocking Joe Biden over allegations of inappropriate touching. On that subject Trump posted a disgusting video meme on Twitter intending to hurt Biden. But as these things often go, it was far more hurtful to Trump because it reminds people of his own bad behavior as well as affirms his grossly infantile approach to serious subjects.

Still, he does have Fox News trying to shield him from criticism and attacking his critics. Which they are doing with devotion, but they’re getting worse at it every day. And now they need to figure out how they will put a happy face on Trump’s nomination of a sexually harassing, failed politician, with zero credentials for the job he’s being tapped to perform. That won’t be easy, but they have lots of experience doing it.

2 thoughts on “Just Like Trump: Fed Board Nominee Herman Cain is a Sexual Harasser Made Famous By Fox News”