The heartbreaking news from Paris has caused shock and despair around the world as the famed, iconic, 800 year old Notre Dame Cathedral was engulfed in flames. The sight of this majestic testimony to the brilliance and creativity of humankind crumbling into ashes was literally painful to watch. Every decent citizen of the Earth is feeling the loss today. 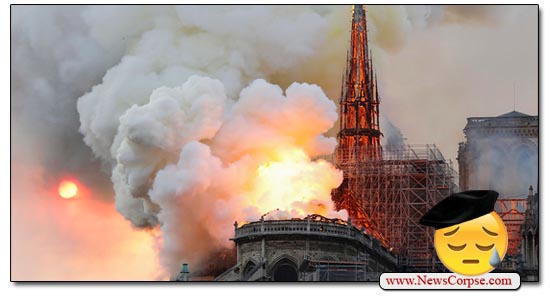 So that leaves the indecent cretins with plenty of opportunity to demonstrate how repulsive they can be. And they lost no time in taking advantage of this tragic event. One of them was French official, Philippe Karsenty, who called into to Fox News and was interviewed by Shepard Smith. Karsenty is a right-wing character who regularly espouses ludicrous conspiracy theories and was recently convicted of defamation. His exchange with Smith nearly devolved into another fruitcake tirade until Smith cut him off (video below):

Karsenty: It’s like a 9/11, it’s a French 9/11. It’s a big shock. We’ve had churches desecrated each and every week all over France. So, of course, you will hear the story of the political correctness which will tell you it’s probably an accident.
Smith: Sir, sir, we’re not going to speculate of the cause of something that we don’t know. If you have observations or you know something, we would love to hear it.

Of course, Karsenty had nothing to offer other than his wild speculation. So Smith ended the interview and gave this admonition to any other conspiracy theorists and the weak, gullible minds they seek to disinform:

Smith: We’re not doing that here, not now, not on my watch. The man on the phone with us has absolutely no information of any kind about the origin of this fire and neither do I. The fire investigators will at some point come to a determination about what caused this and conspiracy theories about anything are worthless and in many cases counterproductive and injurious to society. And those who entertain them are not acting in the best interests of the people of this planet.

Well said, Shep. As for “those who entertain” such nonsense, one of Shep’s network colleagues may be among the first to dive further into the conspiracy soup. Sean Hannity told his radio audience that terrorism may have played a role in this fire. He had no facts, or even vague insinuations, to back that up. It was pure exploitation and fear mongering. What’s more, the wingnut Gateway Pundit and ex-Sputnik shill, Cassandra Fairbanks, praised Hannity and called Smith an “arrogant pompous douche.” And finally, Donald Trump himself weighed on the fire story:

So horrible to watch the massive fire at Notre Dame Cathedral in Paris. Perhaps flying water tankers could be used to put it out. Must act quickly!

Really? Trump is telling the French first responders to “act quickly,” something they probably never thought of. And his advice to have tankers drop thousands of pounds of water on the already damaged and fragile structure was immediately dismissed as incredibly stupid. But then, what else would you expect from Trump?

A surreal moment on Fox, Shepard Smith has to abruptly end an interview with a French elected official who says about the Notre Dame fire that the "politically correct will try to tell you this is an accident" pic.twitter.com/aUwoH7YVpl