One of the only true records that Donald Trump has achieved as president is his Olympic-class achievement of having told more than 10,000 lies. It’s hard to imagine anyone taking that trophy from him. He is a leader in both quantity and sheer audaciousness, considering his unflinching ability to utter absurd, known falsehoods and to repeat his flagrant dishonesties ad nauseum. 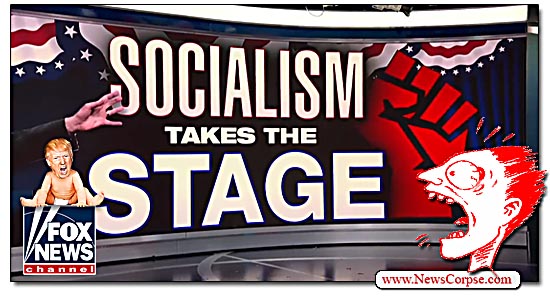 However, having reached the pinnacle of prevarication, Trump is now broadening his horizons with a new form of deceit – Rumors! In an interview on Thursday, Trump thought he found an opportunity to take a jab at those he considers to be America’s most vicious adversaries. No, it wasn’t Russia or North Korea or ISIS or even Central American refugees. It’s just the plain old Democrats for whom his hatred is unbound. The Rumor-Monger-in-Chief told the interviewer that…

“I heard there’s a rumor the Democrats are going to change the name of the party from the Democratic Party to the Socialist Party.”

Let’s set aside the fact that there isn’t anything wrong with being a socialist. In fact, most Americans are socialists, whether they know it or not. Everything from Medicare to fire stations to interstate highways to public schools and libraries are societal benefits born of socialism. But Trump and his ignoramus Deplorables have no idea what the word means. They just use it as a handy pejorative because they don’t have vocabularies that allow them to converse above a third grade level.

And just to intercept the likely excuse that Trump and his defenders will probably serve up, you’ll notice that there isn’t a hint of a smile, or any indication that Trump was trying, in his pitiful way, to be funny. He’s simply casting out an asinine insult that has no basis in reality in order to malign his sworn enemies and to incite others to join him in his hate fest.

Not surprisingly, Fox News has already joined Trump’s Contempt Choir. On Trump’s favorite Fox News morning show, Fox and Friends, the “Curvy Couch” potatoes reveled in a segment bashing the Democratic primary debate (which they also did the day before) that featured a full screen graphic that blared “Socialism Takes the Stage.” Once again, these clods couldn’t provide a definition of socialism if an immigrant child’s life depended on it. (OK, that’s a bad example because they would give a damn about an immigrant child’s life).

This is more support for the argument that Democrats should pay any attention to what Trump or Republicans say about them. The have been calling Democrats socialists for decades, even when they advocated for the same policies. They would call the most conservative Democrats socialists just to keep the phony narrative intact. Presidential candidate Mayor Pete Buttigieg was asked a question about this by Joy Behar on The View and had a pretty darn good response (video below):

“Literally anything we do they’re going to call socialist. If it’s conservative they’ll call it socialist because it’s coming from Democrats. If it’s further left they’ll call it socialist. So let’s not worry about what they’re calling it. Let’s worry about whether it’s a good idea … Call it whatever you like, but let’s get it done if it’s a good idea. And the others can argue about what label to slap on it.”

Buttigieg on Republicans using the term 'socialism': "Literally anything we do they're going to call socialist … so let's not worry about what they're calling it, let's worry if it's a good idea … Call it whatever you like, but let's get it done if it's a good idea."
Via ABC pic.twitter.com/7s7W0l2ABo