In this highly charged era of partisan division, Donald Trump has succeeded in altering the meaning of Independence Day for many Americans. Among his Deplorables it has become a tribute to Trump as savior of the white nationalist principles he espouses. The rest of the nation is hoping to celebrate what the holiday has traditionally represented, in spite of the dark shadow cast by Trump’s self-aggrandizing bombast. 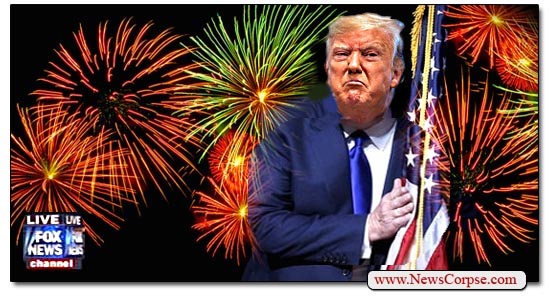 The degradation of the Fourth of July into what most resembles the autocratic parades of the brutal, warmongering dictators that Trump admires (Vladimir Putin, Kim Jong Un, Xi Jinping, etc.) is a depressing development. But it’s also a fallacy that attempts to portray Trump as a patriot. His own words and deeds are proof that he and his promoters are lying. After all, Trump displays his alleged appreciation for the troops by maligning POWs for having been captured, insulting Gold Star families who are not Trump sycophants, terminating healthcare and other services for vets, and deporting veterans who served in combat despite not being citizens.

Trump is shamelessly politicizing the Fourth by offering preferred seating for Republican bigwigs and donors. Meanwhile, he is forcing the military to abandon plans to be with their families in order to participate in Soviet-style parades of weaponry. He even declined to invite the service chiefs for the Army, Navy, Air Force and Marines. Trump, on the other hand, is forcing his staff to spend the day trying to come up with ways to get around the Supreme Court’s rejection of his racist Census question on citizenship. Meanwhile, he’s golfing and, later, presenting himself as the star attraction of yet another one of his partisan campaign cult rallies.

What makes all of this even worse is that Trump’s affinity for the pageantry of war is really just over-compensation for his own inadequacies. His behavior is consistent with that of malignant narcissists who must have everything their way, no matter who suffers. It’s a cowardly display that defines his whole presidency – and life. And it reveals his pitiful insecurity and obsession with magnifying his own perception of his paltry and phony machismo.

The bastardization of patriotism by Cadet Bone Spurs has been an obvious facade from the start. And Trump always aims his wrath at the most vulnerable. His most recent targets are actual babies that he is incarcerating in cages simply because they were brought to the “land of the free” by parents desperate to escape starvation and violence. His callous response to critics was expressed in a tweet saying that…

If Illegal Immigrants are unhappy with the conditions in the quickly built or refitted detentions centers, just tell them not to come. All problems solved!

Sure. Just remain in the dangerous environments that they fled and all problems will be solved. The question is “Whose problems?” Surely not the children, their parents, or even those still suffering in countries that Trump just cut off all foreign aid to. His ignorant vengeance will only result in more people seeking refugee status in the U.S.

And speaking of redistribution of funds, Trump’s DC party is taking money from the Park Service to pay for his ego-stroking extravaganza. Which means he is literally stealing money that otherwise would have supported national monuments honoring the nation and the troops. Instead, it will be wasted on a political sham intended to further inflate Trump’s ego and boost his reelection prospects.

Whatever benefit Trump thought he would receive from this vain exploitation, he may be bitterly disappointed. All of the broadcast television networks have declined to air the blatant campaign event live. Likewise CNN and MSNBC will not be showing it. Which leaves only State TV (aka Fox News) with the exclusive rights to Trump’s Reality TV presentation. Which is only fair (and balanced?) considering that Fox News previously said that that Trump “owns” the Fourth of July and therefore cannot be hijacking it for his own selfish purposes. How’s that for an inspiring holiday sentiment?