It’s becoming a nearly daily event to see President Biden’s press secretary, Jen Psaki, thoroughly, but gently, rip the stuffing out of the pseudo-journalists from Fox News, OAN, and Newsmax, in the bright lights of the White House Press Room. You would think that these ultra-partisan poseurs would learn their lesson and take a day or two (or a month or two) off. But no. 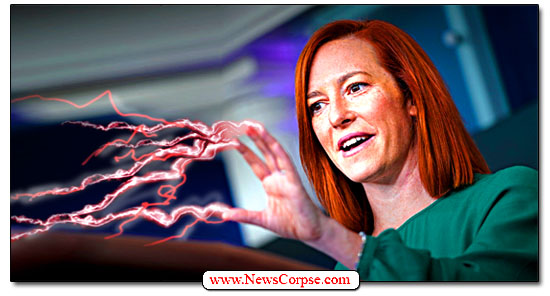 On Friday, the latest episode of Survivor: White House Press Corps saw Emerald Robinson of Newsmax in the dunking chair. And this wasn’t her first time. Last month she tried to pose a question that assumed a total absence of racism in American history. It didn’t go well. On this outing, Robinson was likely certain that her pre-planned gotcha question would penetrate Psaki’s cool exterior. But she obviously hadn’t anticipated the anti-missive that Psaki had ready to deploy (video below):

Robinson: Given the number of former Obama administration officials there are now in this Biden administration, and the President’s relatively light schedule, there’s the growing perception that this is really just the third term of President Obama. What do you say to people who say that?
Psaki: Who’s saying that?
Robinson: We hear that a lot in the media.
Psaki: Who in the media?
Robinson: Different people.
Psaki: Like?
Robinson: Well, there was lots of questions.

OUCH! Robinson really scored with that knockout “different people” punch. But Psaki was unfazed. She ended up ignoring the rest of Robinson’s question, which was lucky for Robinson, because the question was an impotent jab based on an utterly false premise. To begin with, there is nothing peculiar about any administration recruiting from people who have had prior White House experience. In fact, it would be foolish not to. Trump was an exception because he didn’t know anyone with relevant experience, so he recruited mostly from Fox News. And as for Biden’s schedule, here are examples of a recent Biden calendar followed by one for Trump:

Here’s Biden’s public schedule for tomorrow. (Public schedules don’t include all of a president’s activities.) pic.twitter.com/z3UfbIswsz

We already knew that the bulk of Trump’s non-golfing time was spent watching Fox News and tweeting what he saw. Biden, on the other hand, actually attends briefings, consults with his Cabinet, and does the meticulous work required to be a productive chief executive. Which is what made Robinson’s question so ridiculous. But undeterred by humiliation, Robinson shifted gears, changing the subject entirely. She went on to babble something about Vice-President Kamala Harris, who Psaki recently defended from a phony Fox News “scandal.” Robinson was troubled by Harris greeting foreign leaders, as if that wasn’t something done by every vice-president. Psaki had to remind her that…

Psaki: The president has had dozens of conversations and calls with world leaders and it should be no surprise that the Vice-President is also playing an important role engaging with and having discussions with foreign leaders.
Robinson: But it’s more so than other vice presidents have.
Psaki: How so? I’d love to see the data if you want to send that to us.
Robinson: I’ll provide you with that sometime.
Psaki: Sure.

Sure. Sure she will. Psaki shouldn’t wait by the door for that data to arrive. Twice in less than a minute and a half, the Newsmax hack was left grasping for a coherent response when Psaki merely asked her to back up the question. And this sort of massacre is happening regularly. At some point Psaki will have to bar Newsmax from the briefing room as a gesture of mercy.

It’s Jen Psaki’s “sure” at the end ?? pic.twitter.com/u6JwIJQdzP