The geniuses who form the brain trust of the far right are trampling all over each other as they scamper for high ground to avoid the Commie Tsunami they imagine is bearing down on them. The fear is palpable as these whimpering Apocalyptoids rush to save themselves from what they are certain is a world-ending crush of progressive tyranny being orchestrated by the evil forces of self-government known as democracy.

Since the extreme righteous-wing was unable to thwart American voters last November, returning Satan’s Lieutenant Obama to the formerly White House, they are now intent on demonstrating their patriotism by advocating acts of treason and aspiring to secession.

That is the theme embodied in the quixotic blueprints being drawn up for utopian conclaves by folks like Glenn Beck and the architects of The Citadel. These would-be nation-states peddle phony promises of security and liberty to rubes who are convinced that those principles are so fragile under our current Marxist, Muslim, Kenyan president that they are certain to disappear by lunchtime. And the panic produced thereby is a market opportunity for Armageddon profiteers.

Glenn Beck’s version of this Exodus is a city/theme park that he calls Independence, USA. That also happens to be the name of the city that his Mormon faith teaches will be the place that Jesus will choose when he returns to usher in the end of time. Beck doesn’t have any plans for how he will raise the $2 billion he says the project will cost, but it will almost certainly come from the hides of his sheep. As I wrote last week…

“The development includes all the necessities that a demented doomsday prepper could desire. There would be farming land where residents could till the soil and produce their own food. There would be a mall with shops populated by craftsmen who would also teach the young’uns how to make their own rocking chairs and crossbows. He also plans a media center where he would produce entertainment “that would challenge viewers without resorting to a loss of human decency.” It is in that area that he would train new journalists in his techniques of lying and fear mongering. There would be a research facility for…God knows what. Recognizing the need for diversions from all of this ecstasy, Beck plans to include a theme park. And of course, centrally located, would be a church for his parishioners to worship.”

Now it appears that Beck has competition. Another contestant in the Doomsday Bonanza Sweepstakes is a project called the Citadel. Its backers are a mysterious cabal centered around what appears to be an arms manufacturer located in somebody’s garage. Some reports cite the founder as Christian Hyman (aka Sam Kerodin), a convicted extortionist who, in 2004 was sentenced to 30 months in federal prison for setting himself up as a security consultant in order to “shake down shopping malls by publicizing that they were especially vulnerable to terrorist attacks unless they paid him not to do so.”

The Citadel’s terms for residency are a maze of contradictions. They boast that there is “No credit check. No background check. Zero down payment. Zero interest. Zero property taxes,” but you still have to pass an application review and sign their “Citadel Patriot Agreement.” The agreement is described as “a voluntary set of conditions to which every single Patriot who accepts a residence in the Citadel must agree, in writing.” But it’s not really voluntary if you are required to agree. The Citadel claims it “will be built as a fortified bastion of Liberty.” However, The terms “fortified” and “liberty” sort of contradict one another. Plus, to the Citadelians, liberty also means being forced to own a rifle, a handgun and an AR-15 assault weapon, and be trained in their use (you have to pass a test). How convenient that a community founded by a gun dealer requires its residents to purchase guns.

This bastion of liberty also has some pretty severe exclusionary policies. First and foremost is their open antagonism to “Marxists, Socialists, Liberals and Establishment Republicans,” whom they discourage from applying on their home page by warning that they “will likely find that life in our community is incompatible with their existing ideology and preferred lifestyles.” What’s more, anyone who is, or becomes disabled such that they cannot pass the firearms test will not meet their standards and will be denied or expelled. Blind patriots, or even those with severe arthritis, would be unable to pass the marksmanship tests. Also, felons and others not legally permitted to possess firearms would be unable to comply with the requirement to own such weapons. (Wouldn’t that include the founder who is a convicted extortionist?)

The one angle these hucksters appear to have missed is the tax exemptions they would have if they registered these properties as churches. While The Citadel does not seem to be overtly religious, Beck has long cast himself as a televangelist with tearful entreaties to his Lord and sermons on society’s abandonment of Him. Beck famously declared that he has seen “the finger of God” and frequently regales his flock with assertions that God has anointed his path. However, Beck never explains why God later permits him to discard those previously divine projects. Beck’s God may have a touch of ADHD. Consequently, no one will be surprised if none of these projects ever come to fruition.

Not to be left out, Fox News has jumped into the fray with not one, but two promotions for The Citadel. Their Fox Nation web site featured the project in separate postings of the very same article from CNSNews, which is owned by the uber-rightist Media Research Center. 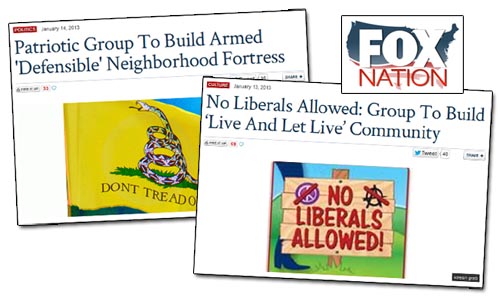 Notice that the Fox Nationalists present these stories in an overtly partisan manner. One headline touts the operation as “Patriotic” despite its inherent separatist and exclusionary policies and the criminal background of its founder. The other headline brags about the “Live and Let Live” lifestyle – unless you are a liberal. The cognitive disconnect required to put both of those concepts into that single headline and image is almost painful.

The natural affinity between Fox and these Last Chance boondoggles is readily apparent. They both devote much of their energy and resources to spreading horror stories about a worldwide collapse of civilization. They both profit from the irrational fear that such stories generate. They both employ propagandists whose job it is to incite terror and suspicion amongst the paranoid yokels who are their target audience/consumer. And they both market a brand of Armageddon that is uniquely designed to enrich their leaders.

It is astonishing, and somewhat depressing, that there are so many misfits who are susceptible to this con game. But if Jim Jones could get nearly a thousand disciples to follow him to the jungles of Guyana (and take their own lives), the far better financed and media savvy successors to his model of salvation have the potential to cause much greater damage. The only prospect for apocalypse is the one being shaped by these false prophets. Let’s hope the flock will pull the wool away from their eyes in time to avoid something tragic.

6 thoughts on “Lust For Strife: ‘The Citadel’ And Glenn Beck’s ‘Independence’ Are Betting On Catastrophe”