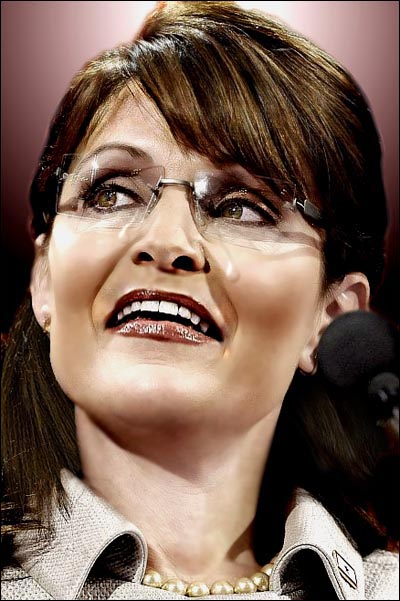 The thing is, Palin is not running. She has no campaign staff; no organization in early primary states; no press office. Polls place her near the bottom of the pack and losing to President Obama by 20 points. She is not engaging in public appearances. In fact, her much ballyhooed national bus tour was aborted after just six days without ever making it off the east coast.

Too bad. I wish she were running. It would add another element of comic relief to supplement Newt Gingrich and Michele Bachmann. With Donald Trump out of the game the comedy factor took a serious hit.

The problem is that Fox News is still pretending that she’s a candidate and, by doing so, they are deliberately lying (so what else is new). Several months ago there were four Fox employees who were also speculative candidates for the Republican nomination: Palin, Gingrich, Santorum, and Huckabee. All four were in precisely the same position with regard to the race. They were all openly exploring campaigns and discussing it in public. At that time Fox gave two of them, Gingrich and Santorum, ultimatums insisting that they declare their intentions or be terminated. There was no apparent reason for excluding Palin and Huckabee from that edict.

Since then Gingrich and Santorum officially declared and Huckabee bowed out. This leaves Palin as the only prominent Fox employee still dangling. But with no visible manifestation of a candidacy, can she be taken seriously? The fact of the matter is that if Palin was a candidate in earnest, Fox could not keep her on the payroll. At this late date they would have to insist that she either fish or cut bait, just as they did with Gingrich and Santorum. She could not be both undecided and a Fox News contributor.

Evidence of the Palin predicament occurred yesterday as two Fox News analysts admitted on the air that they temper their criticism of Palin because she is their colleague:

Greg Gutfeld: The only problem with talking about Sarah Palin is that she works here, and it’s like a coworker. And if I say something bad and I see her in the hallway I feel really awkward and wrong.

Bob Beckel: It has nothing to do with that. It has everything to do with your paycheck. That’s why you feel awkward about it. I know exactly what you mean. I’ll be honest, I’ve pulled my punches.

These admissions are not surprising and are not limited to Gutfeld and Beckel. It is the law at Fox News as it was laid down by the boss:

So how does a Fox News reporter cover Palin when he has been warned by his boss not to criticize fellow tent-dwellers? That’s the problem, and that’s why Sarah Palin is not a candidate for president. Fox knows that they can’t cover even a potential candidate who receives a Fox paycheck this late in the game. If Palin has not informed the network that she isn’t running, they would have to sideline her. Since that has not happened, it’s a safe bet that she has already told them that she’s out of the race.

If that’s the case, then Fox News knows that a prospective candidate has opted out, but they are keeping it secret. That is not acceptable behavior from a legitimate news enterprise, which of course, Fox is not. They are withholding a significant news item that journalistic ethics would require they disclose. Particularly because the only reason for them to withhold it is for their own financial benefit, and for that of Palin.

What’s worse is that they are brazenly manipulating the course of the election in a manner that has implications for the other candidates and, of course, the voters. It is long past time for Fox to come clean and reveal what they know about Palin’s alleged candidacy. And in the unlikely event that she really is undecided, then Fox should suspend her just as they did Gingrich and Santorum.

It’s really sort of pathetic how utterly humorless modern conservatives have become. Following Barack Obama’s interview last night on 60 Minutes, a torrent of indignation was released across the mediasphere that blew past Politico, Drudge, and countless right-wing blogs. What had Obama done to unleash such fury, even causing interviewer Steve Kroft to inquire if Obama was “punch drunk?” He laughed. Yep, that’s it. He laughed.

To any rational viewer, the moment merely demonstrated the President’s amusement of the relentless curiosity of media figures that don’t get it. At worst, he was just using laughter as a stress reliever. That’s something that many real people do during anxious times. For critics who have been hammering him for weeks about being too glum, it is absurd for them now to assert that a gentle laugh suggests that, all of a sudden, he is too flippant and detached.

All of this fits right in with the sorrowful character of conservatives. They were dismayed when they thought Obama did not do enough to assuage their grief. Now they are disturbed that he is not exhibiting enough grief of his own. Either way they are consumed by their incessant grieving and blaming it all on Obama.

The lack of humor on the part of the right is reaching epidemic proportions. Their comic heroes are Rush Limbaugh and Ann Coulter. How sad is that? Last week Tucker Carlson presumed to lecture Jon Stewart on the art of comedy. This weekend, Bill O’Reilly’s column attempted to bring the funny, but missed miserably. The article is a collection of fake headlines (something O’Reilly and Fox News should be adept at), aimed at mocking the liberal media. But there are two significant problems with O’Reilly’s comic foray. First, it isn’t remotely funny. Second, the only thing he succeeds at making a mockery of is himself. In the first paragraph he says:

O’Reilly: The other day, left-wing muckraker Seymour Hersh went on MSNBC and said he had information, provided by the usual anonymous sources, that Dick Cheney was running an assassination squad out of the White House.

However, the Pulitzer Prize winning Hersh never went on MSNBC with this story. So in an article seeking to ridicule the liberal media for making up news stories, O’Reilly actually made up a story of his own in the part of the article that he presented as factual. Is there any part of his wretched reality that doesn’t put satire to shame?

So where are the funny conservatives? Where is the right’s Jon Stewart, Stephen Colbert, Chris Rock, Tina Fey, George Carlin (RIP), etc.? Is Rush going to have to be both the head of the Republican Party and the chief conservative comic? Or will it be the indecipherable Dennis Miller or Fox’s Greg Gutfield, who just got a few yucks at the expense of dead Canadian soldiers? There is, of course, the hysterical escapism of Glenn Beck and Sean Hannity, but if you don’t already suffer from acute paranoia, do you really want to assume that risk?

It really is pathetic how desperate and forlorn the right has become. They appear to have nothing left but to invent outrage where non exists, and to cling to leaders who offer only obstacles. And when the human spirit requires uplifting more than ever, they are stuck with clowns who have painted on permanent sneers. And even worse, their melancholy is magnified merely by witnessing the horror of a laughing President. It makes me sad just thinking about it.