Rassmussen Reports, the official Fox News source for conservatively biased polling, conducted an interesting survey over the weekend that asked:

Setting aside whether or not we should apply rhetoric like “terrorist” to political adversaries, the result of the poll was that nearly a third (29%) of respondents said that they do regard the Tea Party as terrorists. That’s an astonishing result. Fifty-five percent disagreed and 16% are undecided. That means that nearly half the country believe that the Tea Party are, or might be, terrorists. And remember, this is Rasmussen, the wing-nuttiest of all pollsters.

These results drive home the point I made when I wrote Why Is Anyone Listening To The #@$%*#& Tea Party? It is a discredited constituency that couldn’t fill the back room at an Applebys. Yet for some reason too many in the media and in Washington, including Democrats, take them seriously. That breakdown of mental acuity helped to sap trillions of dollars of wealth from asset markets in the past couple of weeks.

Additionally, the Rassmussen poll shows that…

Again, this is Rasmussen! If a plurality of voters in a Rasmussen poll think that the Tea Party has made things worse, the real number must be a substantial majority. Consequently, any politician who throws in with the Tea Party is representing a phantom movement and contributing to the harm that these phony radicals are causing.

More likely, they are serving their AstroTurf masters at Americans for Prosperity and other Koch-funded frauds. A good percentage of the millions of dollars that it takes to produce the mirage that is the Tea Party is surely flowing into the campaign accounts of Republicans across the nation. But given the results of this poll, and virtually every other one on the subject, these greedy pols will soon regret their decision.

Here’s another Fox News violation of their Zero Tolerance policy for on-air mistakes. This morning Fox broadcast President Obama’s speech wherein he announced that the TARP program cost $200 billion less than originally anticipated. But on the Fox screen the number was reduced by $198 billion: 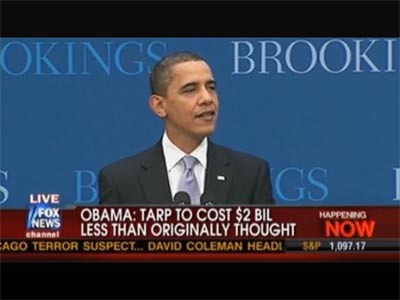 And as if that wasn’t bad enough, in a segment that appeared on Fox & Friends this morning, they displayed this chart of a poll that managed to interview 120% of the American people. I guess if you have to distort data, it helps if you don’t know how to add. It probably also helps if your viewers are similarly challenged. 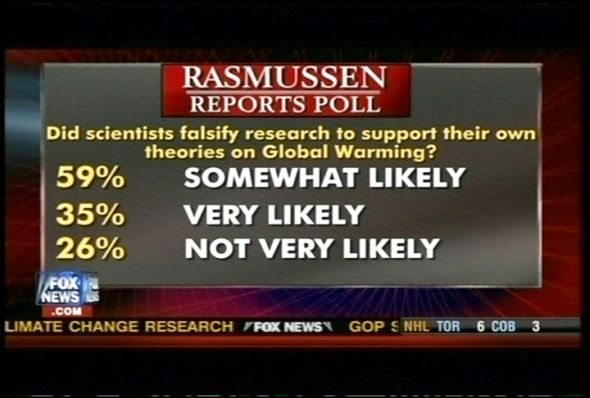 Never mind that Fox continues to rely on the disreputable Rasmussen organization for polling, even that suspect data is further distorted by the Fox News graphics department. As for the poll itself, Rasmussen asked:

“In order to support their own theories and beliefs about global warming, how likely is it that some scientists have falsified research data?”

I would have answered that question “Very likely.” Of course “some scientists” have falsified data. However, I would have been referring to scientists at Exxon or the American Enterprise Institute, not those with universities or non-partisan environmental research facilities who overwhelming report honest figures that document Global Warming. By not drawing that distinction, Rasmussen has rendered his poll meaningless.

Just as a reminder, Fox said that errors such as these would result in those responsible being punished, and even terminated:

“Mistakes by any member of the show team that end up on air may result in immediate disciplinary action against those who played significant roles in the “mistake chain,” and those who supervise them. That may include warning letters to personnel files, suspensions, and other possible actions up to and including termination.”

At this rate, Fox isn’t going to have any employees at all by the end of the month.

Update: A Fox News spokesperson responded to the erroneous chart on Global Warming by claiming that it wasn’t erroneous:

“We were just talking about three interesting pieces of information from Rasmussen,” Petterson said. “We didn’t put on the screen that it added up to 100 percent.”

So at Fox News, if you don’t put up on the screen that it adds up to 100 percent, you can put in whatever numbers you want. Even their own host, Steve Doocy, added up the numbers to point out that 90+ percent think scientists falsify data.

This explains why the new Fox policy of Zero Tolerance will never work. They can’t count up to hundred. Hell, they can’t even count up to zero.

And on a side note, this blatant misrepresentation of the poll results occurred on poll about people misrepresenting data. So Fox wants to make you believe that the scientists are not trustworthy when they themselves are falsifying data. Cute, isn’t it?

Last week I wrote about the latest index invented by the notoriously deceptive Rasmussen polling firm. Rasmussen’s Presidential Approval Index actually distorts the President’s approval by leaving out huge chunks of the poll’s respondents. He does this by counting only those who express a “strong” opinion. As I said last week…

The problem with this method is that it ignores all of those who approve or disapprove, albeit not strongly. In his own survey, the Presidential Approval Index is a negative 1 (-1), which he then releases to the media as demonstrating that the Obama honeymoon is over. However, his results including all respondents show that Obama is regarded favorably by a healthy majority of 54%, compared to 45% who disapprove (+7).

At the end of that article I concluded that “Rasmussen has emerged as the number one most likely pollster to be interviewed on Fox News.” That has been true for some time, but now Fox is tightening their embrace of the partisan pollster by misrepresenting the already skewed results. Here is their story from The Fox Nation announcing that “Obama Job Approval Index Dips Negative for First Time” :

You really have to wonder how Fox manages to screw up stories even when they originate from their own partners in propaganda. The lesson is to never underestimate Fox’s ability to slant a story in favor of their rightist prejudice.

In a survey conducted by News Corpse of pollsters who invent statistical models for the purpose of advancing their bias, Rasmussen scored a new high of 100% disreputability.

Last April, I wrote about how Rasmussen had created a bogus new index to classify polling results. He labeled his survey break points as being either “mainstream Americans” or the “political class.” These groupings were based on the answers to a set of three questions that had less to do with the new classifications than on whether the subject was clinically paranoid.

Rasmussen is at it again. Now he has a survey that he calls a “Presidential Approval Index.” He arrives at the results by subtracting the number of respondents who strongly disapprove from those who strongly approve. Then he states the remainder as representative of the President’s national popularity.

The problem with this method is that it ignores all of those who approve or disapprove, albeit not strongly. In his own survey, the Presidential Approval Index is a negative 1 (-1), which he then releases to the media as demonstrating that the Obama honeymoon is over. However, his results including all respondents show that Obama is regarded favorably by a healthy majority of 54%, compared to 45% who disapprove (+7). This does not get reported to the press, but is published on the Rasmussen web site and seen only by those who sought the additional data.

Obama’s approval ratings have not varied by more than 5 points in the past three months according to Rasmussen (who typically produces lower numbers than other polling firms). But he has found a novel and dishonest way of portraying the President’s numbers as falling off. As a result of this trend toward opinion-driven polling, Rasmussen has emerged as the number one most likely pollster to be interviewed on Fox News.

Scott Rasmussen is to polling what Rush Limbaugh is to objective reporting. That is to say he has no scruples other than to serve up a pre-mashed helping of right-wing propaganda. Whenever the Democratic agenda gains favor, or Obama’s popularity is rising, you can count on Rasmussen to deliver a survey that reports precisely the opposite. For this reason, he is a frequent guest on Fox News. They surely appreciate that when he walks into the studio he brings with him a version of reality that conveniently skews to their prejudices.

Now Rasmussen has introduced an innovative new index that tracks the variances between what he calls the Mainstream public and the Political Elite. In a recent example of this breakthrough, he reports that the Tax Day Tea Parties were viewed favorably by 51% of “Americans” but only 13% of the Political Class shared that view.

So you may be wondering how Rasmussen determines who is an Elitist and who is a Mainstream American. He does this by conducting a comprehensive psychological regimen of inquiry to create a detailed profile of a respondent’s subjective tendencies. I am including here the questions that make up his comprehensive study – all three of them:

Answer two of more of those questions affirmatively and you are a Mainstream American. Answer two or more in the negative and you are a Political Elitist. What could be simpler? Or more simple minded?

The good news is that, despite the fact that I am one of the most politically oriented people you could ever hope to meet, according to Rasmussen I am a Mainstream American. I would answer both the second and third questions with a firm “aye.” As for the first question, I do not so much disagree with it as I am confused by it. I don’t know how to compare the judgment of America’s political leaders to that of the American people. Is there an authority to whom I can refer to ascertain the American people’s judgment on any issue? And aren’t America’s political leaders a reflection of the people’s judgment? No matter – I am still squarely Mainstream as measured by Rasmussen’s index.

The problem here is that Rasmussen is using this index to draw distinctions between the two groups and characterize them as significant. Never mind that the Political Class he defines occupies a mere 7% of respondents. With this gimmick he can report nonsense like the Tea Party numbers above. After all, who really cares if 13% of the 7% of Elitists don’t like tea? If he surveyed 1,000 people, then we’re talking about 9 who fall into that category. That’s 9 out of 1,000, or less than 1%.

This has absolutely no statistical value whatsoever. The only purpose it can possibly serve is to create an imaginary group against which to compare other results whose significance you wish to artificially enhance. This permits Rasmussen to imply that an invented class of people have decidedly different values than the rest of us. And since his test for what constitutes a Mainstream American is so broad, the whole process is worthless, and worse, it’s phony. He may as well have asked…

Those that do not answer in the affirmative are Poopyheads and may not play with the rest of us Americans. We all owe Rasmussen a debt of gratitude for revealing to us the stark differences that are hidden amongst our nation’s people. He is a master at exposing the vast, make-believe divides that were meant by divine providence to keep us apart and at each others throats. Heaven forbid we might all be more alike than we assumed.