In the wake of the guilty verdicts for George Floyd’s killer, Derek Chauvin, Fox News has been busy trying to construct narratives that align with their racist, right-wing mission. So when they aren’t falsely accusing Democrats of “inflaming tensions,” they are alleging that the trial was unfair and the jury was intimidated by “mob justice.” 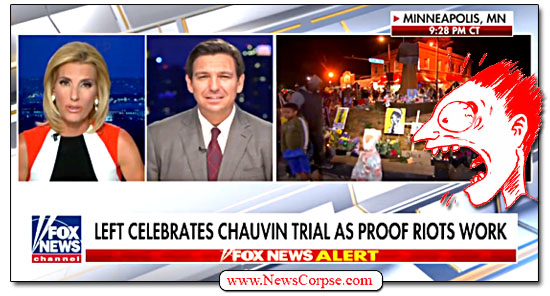 On Tuesday evening Laura Ingraham joined in the Fox News campaign to dismiss the the evidence, the witnesses, and the jury, to peddle her own theory that the verdict was tainted by threats of violence, despite the fact that none were made and that the jury never encountered any. Ingraham failed to explain how such a jury would have been swayed under those circumstances.

Ingraham: I talked about how the ‘Big Lie’ that was told over and over by activists, media types, and the President and Vice-President is that America at her core is a racist nation. Your thoughts on that continued repetition and drumbeat, especially as it affects young Americans.
DeSantis: I think it’s very damaging because it’s an attempt to delegitimize all the institutions in our country, starting with the Constitution. They denigrate the Founding Fathers, they denigrate everybody in society now. I think it’s very harmful.

First of all, Ingraham has been trying for several weeks to shift the definition of the “Big Lie” from Trump’s deranged insistence that he won the 2020 presidential election, to whatever morsel of bullpucky happened to be on her TelePrompTer at the moment. In this case she’s peddling a flagrant falsehood aimed at denying that there is systemic racism in America. DeSantis was happy to agree, while adding some preposterous charges that President Biden and others were attempting “to delegitimize all the institutions in our country.” Really? All of them? And that’s the charge they’re making as they are trying to delegitimize the judicial system?

The conversation just got worse from there. Ingraham played a video of a protester in New York City who had a righteous complaint about how Black Americans have suffered in a country that allows them to be killed by the law enforcement authorities that were supposed to protect and serve them:

“What we really have to be cognizant of is that it was a mixture of violence and nonviolent protest that yielded this result. That’s the bottom line. America doesn’t listen to us when we march peacefully. I’m not saying that people will be back in the streets, but America must know that if you continue to allow us to be murdered in the streets without justice, we will raise hell in America.”

However, rather than hear the justifiable grievances of this articulate young man, Ingraham chose to interpret his comments as threats of imminent violence. Which led to this exchange with DeSantis:

Ingraham: Governor, this isn’t stopping anytime soon, as he indicated. Violence, at least in part, worked in his view.
DeSantis: Well that’s really, really troubling, Laura, because if that’s what a lot of people think — I don’t know what happened with that verdict, but if that’s something that can potentially happen, where you basically have justice meted out because the jury is scared of what a mob may do — and, again, I’m not saying that’s what happened here, but that speaker seemed to suggest that that had an impact — that’s completely antithetical to the rule of law.

Once again, the jury had no exposure to these sort of comments, and they weren’t a part of the deliberations. Ingraham and DeSantis are purposefully belittling the abundant and damning evidence against Chauvin, including a video of his victim being murdered in real time. They are dismissing the testimony of witnesses, medical experts, and even the police chief who was Chauvin’s boss.

And if all of that weren’t enough, throughout much of the interview, there was a graphic on screen that read that the “Left Celebrates Chauvin Trial As Proof Riots Work.” Ingraham never even tried to support that disgusting allegation in the segment. Perhaps because there was no honest, coherent way to support it. It was simply left there to poison the weak minds of the Fox News audience.

No one on the left was celebrating the verdict, which was regarded as a solemn moment to reflect on the loss of lives. And no one on the left considers rioting to be a valid means of protest. Although some – like Rev. Martin Luther King – understand that, while it isn’t supported, “A riot is the language of the unheard.” And in this program Ingraham, DeSantis, and Fox News are demonstrating that they are dangerously deaf.