This is becoming redundant, but the latest ratings survey once again has Fox News slouching alone as the only cable news network to lose viewers year-over-year. The decline holds for both total viewers and for the 25-54 year old demographic, with the worst showing a double-digit decline in the demo for primetime. 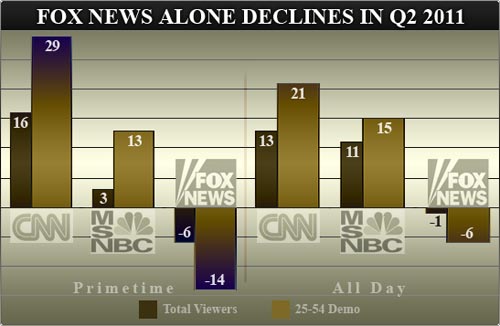 The next quarter will be interesting in that it will be the first without Fox’s big asylum draw, Glenn Beck. Beck’s program signs off in two days, after which Beck promises that liberals will pray for the days when he was on TV. If he believes that his delusions are becoming more severe.

The big question for Fox is what will take his place? His disciples are not going to be satisfied with some run-of-the-mill lunatic. What’s odd is that there has been no announcement of any replacement for Beck. It appears that they intend to run with fill-ins for the time being. But there’s going to have to be a new title come Friday. Perhaps they will just start Bret Baier an hour early. We’ll see.