This weekend saw a lot of citizens stepping out to redress their grievances with the government. Rallies and protest marches took place around the country. On Friday it was the anti-abortion faction that showed up in Washington, D.C. to force their religious doctrine down the throats of all Americans. On Saturday the nation’s women marched in support of equal rights and in opposition to Donald Trump’s trampling of them. 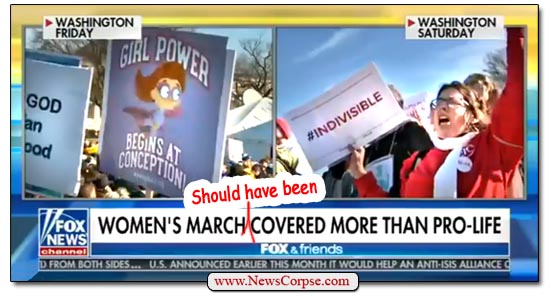 The media has a dismal record of covering public protests unless the protesters wore silly Revolutionary War costumes and pretended to drink tea. For some reason the press doesn’t regard people exercising their constitutional rights in large numbers to be newsworthy. And that’s especially true with regard to Fox News. Despite the massive turnout for the Women’s March, Fox News gave it only cursory coverage with snide and belittling commentary.

That makes it all the more disturbing that Fox and Friends devoted more time to complaining about coverage than providing any. On Monday morning they hosted Molly Hemingway of the ultra-rightist Federalist to whine that the Women’s March got a little bit more attention on network news than the forced birthers did. In the introduction to the segment, co-hosts Steve Doocy and Ainsley Earhardt engaged in this exchange:

For the record, the difference in allotted time as reported by Fox News was two minutes, six seconds for the March for Life vs. six minutes, forty seconds for the Women’s March. Because the numbers were so low, the differences are not really significant. But Fox’s grumbling about “three times” the coverage is comical. If there were actually any correlation between the size of the events and the coverage, the Women’s March would have received substantially more than ten times as much.

According to a report by Fox News itself, the attendance of the March for Life in D.C. was only about 100,000. That’s down about eighty-five percent from a similar rally in 2013 that drew 650,000. And this year the march featured a special appearance by Trump making a live video address. On Saturday, the attendance for the Women’s March in D.C. was estimated to be about 600,000 in Los Angeles, 300,000 in Chicago, at least 200,000 in New York, and many tens of thousands more in hundreds of cities across the country.

So the March for Life was lucky to get as much as a third of the coverage that the Women’s March got. Their measly hundred thousand supporters didn’t deserve even that when compared to the millions that showed up for the Women’s March. Considering the historic crowds on Saturday, the media utterly failed to represent the support from citizens peacefully taking to the streets to express themselves. But Fox News is only compounding the problem when they bitch about not fair getting coverage. It’s plain to see that they aren’t interest in fair coverage at all. They are only interested in plastering the airwaves with their own biased propaganda.

Whoot! Thanks to @foxandfriends for sharing my @March_for_Life vs. @womensmarch numbers on air. pic.twitter.com/1AwuVqHvS1