The Republican Party is struggling to stay afloat in this Era of Trump. The President has been an anchor around the necks of many GOP office holders and candidates. An unprecedented number of Republican members of Congress (over 40) have already resigned or announced that they will not be running for reelection. And this is a year during which they control all three branches of the federal government. 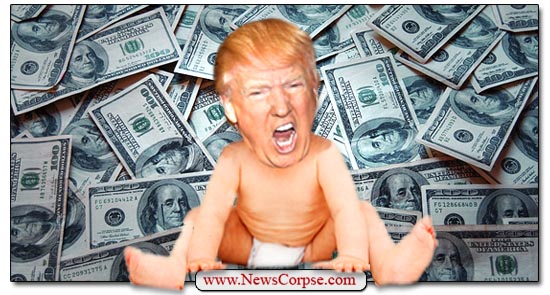 Republicans still in the game have been hurt in the pocketbook this year. they are raising significantly less money than Democrats and everyone, regardless of party affiliation, is expecting a “blue wave” to sweep Washington come November.

So it doesn’t help when when Republicans stage fundraisers where they actually spend more money then they take in. But that’s what happened in Morris Country, New Jersey in February. And the reasons for the shortfall were emblematic of the con game mentality that dominates the tenor of Donald Trump’s Washington. The New Jersey Globe reports that:

“Morris County Republicans lost money on their winter fundraiser at Trump National Golf Club and have a paltry $13,956 in their warchest […] The county GOP organization raised $58,335 at an event that cost them more than $64,000. They spent $24,487 at Trump National and paid Fox News personality Greg Gutfeld $30,000 to speak.”

That’s right. The reason that the party fundraiser is in the red is because Trump’s facility and a Fox News hack took all their profits. Both Trump and Fox News ought to be conscious of the impact they are having on the electoral prospects of their political allies. They surely don’t want Democrats to win in these races that are considered competitive. But in both cases Trump and Gutfeld seem to be more devoted to their own greed than to their political values. Which is actually consistent with their political values.

The article in the Globe closed with an additional bit of information that makes this embarrassing event look even worse:

“At the February fundraiser, Republicans teased potential donors with the idea that President Trump would attend as a surprise guest – even asking for social security numbers in advance, something that would suggest a presidential appearance. Trump was at Mar-a-Lago and there was little possibility that he would be in New Jersey for President’s Day weekend.”

So this money losing affair flopped even after they tried to fool people into thinking that they might get to rub elbows with their Dear Leader. Apparently Trump wasn’t a sufficient draw to turn around the prospects of this debacle. But at least he made a few thousand bucks off of it. And so did Fox’s Gutfeld. So it wasn’t a total loss. Unless you’re a Republican candidate in Morris County. Here’s hoping the GOP will put on more of these events. Trump and Fox News shills can always use the extra cash.

From its inception, Fox News was determined to disguise their political biases. They fashioned a network that they would claim is “fair and balanced,” but would never even attempt to live up to that standard. Last year they finally abandoned that slogan and replaced it with one that was obviously and shamelessly inspired by Donald Trump’s anti-media histrionics: “Real News.” 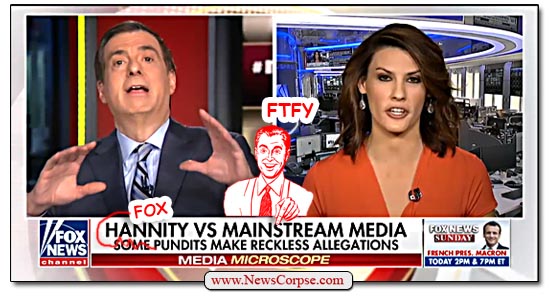 So it isn’t surprising when the chief media correspondent on Fox News, Howard Kurtz, would host a discussion on his show about media bias that flagrantly ignores it own ethical breaches. Sunday’s episode of MediaBuzz delved into the controversy surrounding Fox News host, and official Trump-fluffer, Sean Hannity. This week Hannity was revealed in court to be another client of Trump’s beleaguered attorney, Michael Cohen. He vehemently denied that which, in effect, means that he’s calling Cohen a liar. That’s something that Trump himself seems to be preparing to do.

Kurtz was disturbed by the media reaction to Hannity’s unambiguous ethical lapses (video below). Primarily, he found fault with the coverage of this story by his competitors on cable news. He led off the conversation saying that:

“In the aftermath, and it was such intense media reaction to this, a couple of people went on the air on other cable news channels and kind of just got out there.”

As examples of this alleged “outness,” Kurtz played video of two guests that appeared on MSNBC, but no other cable news channels. They raised questions about the undeniably conflicted relationship between Hannity and Cohen. The guests were Danielle Moodie-Mills, a SiriusXM talk show host, and Jennifer Rubin, a conservative opinion columnist from the Washington Post. Both observed the coincidence that Hannity had secured the services of Cohen, a “fixer” who had facilitated payoffs to the mistresses of his other clients (Trump and RNC official Elliot Broidy).

Since Hannity refused to disclose the nature of his relationship with Cohen, it’s entirely fair for pundits to assemble available data and offer analyses that seek to provide a coherent explanation. But that’s not how Kurtz sees it. He asked his guest, Shelby Holliday of the Wall Street Journal:

“How can professional commentators go on the air and speculate, without a shred of evidence right after this happened, that ‘Oh, there must have been a woman involved or something’ and there is absolutely no evidence to support it?”

Seriously? This is Fox News wondering whether it’s appropriate to speculate about public figures. It’s the network that spent years asserting that Barack Obama was an illegitimate president due his birth in Kenya. It’s the network that tried to blame Hillary Clinton for deliberately causing the deaths of American diplomats in Benghazi. It’s the network that advanced wild conspiracy theories like the child sex slave ring in the basement of a Washington, D.C. pizza parlor. And it’s the network that pushed ludicrous allegations that DNC employee Seth Rich’s murder was a clandestine, “Deep State” political assassination. That last one was Hannity’s baby. And those are just a few of Fox’s innumerable adventures in ridiculous and defamatory speculation.

Holliday responded to Kurtz’s inquiry by agreeing that “Journalistically that’s out of bounds. No reporters or news people should be speculating like that.” Of course, the examples that Kurtz played were opinion commentators, not reporters. And to her credit, Holliday did point that out to Kurtz. But Kurtz shot back that “Fine. You can criticize him all you want, but you can’t make stuff up and speculate.”

Well, thanks for that completely obvious and, for Fox News, hypocritical advice. Being told by Fox not to speculate is like being told by Donald Trump not to lie. And the fact that their specialist in media is so woefully lacking in self-awareness makes anything he has to say about the press unworthy of consideration. It’s asinine comments like these that make laughter the only appropriate response to anything Fox News says.