There have never been darker clouds over the White House than there are now. Donald Trump is keenly aware that he is in deep peril and his presidency could come crashing down. Much of his concern is centered around the recent news that his lawyer, Michael Cohen, was the subject of a raid by the U.S. Attorney’s Office in Manhattan. Trump is behaving as though he is aware of the potential for discovery of his own criminal activities. Innocent people don’t act this guilty. 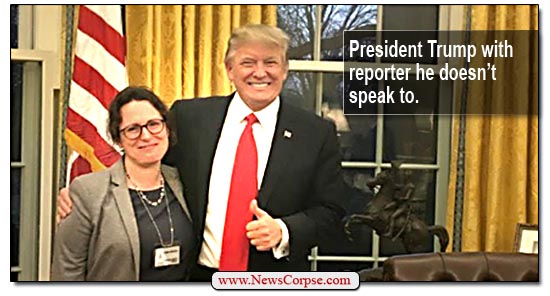 Our desperately frightened president is showing his seething fear on Twitter with another of his morning tweetstorms. This one is directed at the Pulitzer Prize winning New York Times reporter Maggie Haberman, but it goes much deeper than that:

The New York Times and a third rate reporter named Maggie Haberman, known as a Crooked H flunkie who I don’t speak to and have nothing to do with, are going out of their way to destroy Michael Cohen and his relationship with me in the hope that he will “flip.” They use….

….non-existent “sources” and a drunk/drugged up loser who hates Michael, a fine person with a wonderful family. Michael is a businessman for his own account/lawyer who I have always liked & respected. Most people will flip if the Government lets them out of trouble, even if….

….it means lying or making up stories. Sorry, I don’t see Michael doing that despite the horrible Witch Hunt and the dishonest media!

The article that triggered Trump’s rant was an analysis of the potential for Cohen to flip on Trump and spill his guts to special counsel Robert Mueller. If Trump didn’t think that was possible, he wouldn’t have lashed out like this. His attack on Haberman is a typically shallow insult without any factual basis. Third rate reporters don’t win Pulitzers. Haberman has a record of being particularly harsh on the Clintons. And he frequently calls Haberman, who has also been his guest at the White House.

Trump’s reference to “a drunk/drugged up loser” is the sort of blind attack that he specializes in. Speculation that he’s referring to Roger Stone is safe, but unconfirmed. [Update: Haberman tweets that Trump is referring to Sam Nunberg. He’s too scared of Stone]. In any case, he is proving that anyone who crosses him is subject to his wrath, even loyal supporters. Additionally, his assertion that Haberman’s sources are “nonexistent” is a common and baseless line that he throws out in a lame attempt to dismiss criticism. But it’s also a direct attack on the First Amendment.

Most troubling about this flurry of tweets is Trump’s attempt to distance himself from Cohen. His phrasing that Cohen is a “businessman for his own account” is Trump’s way of implying that he isn’t really Trump’s lawyer. Perhaps he’s just the coffee boy. Even worse is Trump’s assertion that “Most people will flip if […] even if it means lying or making up stories.” Here Trump is laying out his strategy for what he will do if Cohen does flip. He’s going to call Cohen, his personal attorney for decades, a self-serving liar who was seduced by the evil government into inventing heinous tales of criminality by Trump.

Trump closes with a signal to Cohen that he can stay in Trump’s good graces if he resists the efforts by the Feds and the media to coerce him into telling the truth. But if Cohen flips, Trump isn’t going to be able to credibly portray him as a liar. He would have to make people believe that Cohen would expose himself to even greater legal jeopardy by giving false testimony. So in this affair Trump is a cornered rat and he’s acting like one. That, of course, is only going to make matters worse as events continue to close in around him. Fun times ahead.