There is only way place to go these days if you’re looking for unrelenting, mind-numbing idiocy on television. The Fox News morning show, Fox and Friends, isn’t Donald Trump’s favorite for nothing. It features a cast of “Curvy Couch” potatoes who seem to enjoy presenting themselves as unabashed morons. And naturally, their guest line up is just as feeble-minded as they (and their audience) are. 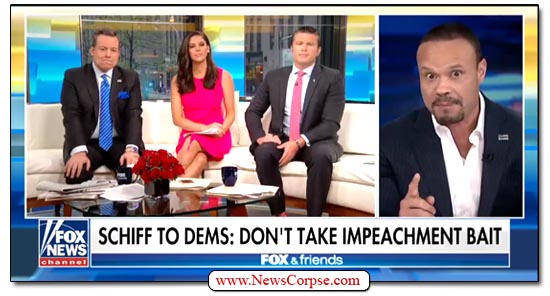 Fox contributor and NRA shill Dan Bongino visited Fox and Friends to whimper about an op-ed published by Rep. Adam Schiff in the New York Times. The headline reads “Democrats: Don’t Take the Bait on Impeachment.” Schiff’s position is that impeachment should not be a political goal in and of itself, independent of legal basis supported by facts. He’s concerned that Democrats might get too far in front of the issue and create a backlash:

“…if impeachment is seen by a substantial part of the country as merely an effort to nullify an election by other means, there will be no impeachment, no matter how high the crime or serious the misdemeanor.”

“Given the evidence that is already public, I can well understand why the president fears impeachment [but] Democrats should not take the bait.”

So Schiff unequivocally calls for a tempered approach that doesn’t politicize the very real legal matters that are being investigated by special counsel Robert Mueller. However, this reasonable attitude became a target of derision by Bongino. In a feverish tirade Bongino lashed out at Schiff for being fair-minded and rational – and for agreeing with him (video below):

“Adam Schiff is a fraud. I’m sorry, he’s a fraud. And I say it and I mean it. I know those are harsh words, but Adam Schiff is not a stupid man. This is a smart guy. Adam Schiff has access to information on his Intel Committee that you and I don’t. He has known for at least a year now, if not longer, that this collusion story with the Russians is a hoax.”

Apparently Bongino has the gift of clairvoyance since he is able to discern from Schiff’s thoughts that he has knowledge that he is withholding. However, another explanation might be that Schiff does indeed have access to information that supports his position regarding Trump and Russian collusion. As he pointed out in the op-ed, the evidence that is already public is pretty damn incriminating. But Bongino prefers to rely on what he picks up telepathically while watching Schiff on TV:

“He has gone on every media channel he can – puts his make up on, does his thing – and has said that Trump has colluded with the Russians. The only reason he’s writing this op-ed now, I believe, is because he’s starting to see that the American public, based on polling data, is catching on that this is a hoax and it’s getting frustrating. Schiff is a fraud. He’s not doing the right thing. He’s doing the easy thing.”

For the record, every poll on the subject shows that the American people believe that Trump worked with Russia to help him get elected. They also overwhelmingly support Mueller’s investigation and want it to continue. These survey results were even affirmed by a poll conducted by Fox News. Bongino doesn’t bother to disclose the polling data he allegedly has, but it’s ironic that he’s making these ridiculous claims on the network whose own poll contradicts him.

Finally, Bongino is obviously too dense to grasp that his bitching about Schiff is an assault on logic. He’s complaining that Schiff wrote an article that argues against focusing on impeaching Trump, which is an opinion that Bongino shares. So does Bongino think that Schiff should have written an article advocating impeachment instead? Perhaps then Bongino would not be calling Schiff a fraud, but he would certainly be condemning him for advocating impeachment.

Bongino really needs to make up his mind. But you would need to have one that’s functioning to do so. On the plus side, by lacking critical thinking skills and having a rabid animosity toward all things Democratic, Bongino has secured himself a safe spot on Fox News for many years to come. And he’ll fit right in with Fox’s hosts and guests who share similar mental defects and biases.