The presidency of Donald Trump has been likened to some of the most horrible episodes of America’s past. Most frequently it is compared to Nixon’s Watergate scandal that saw the White House intimately involved in burglary, bribery, and election tampering. The lies told by members of the Nixon administration are what got most of the criminal convictions and, eventually, the resignation of the President. Sound familiar? 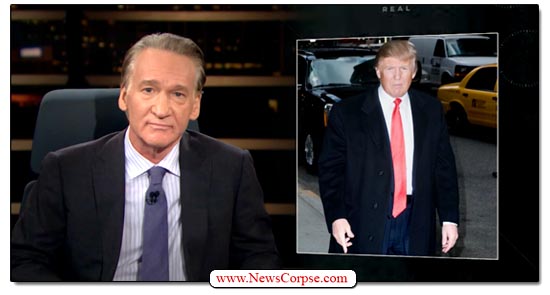 However, Bill Maher has hit on a much more accurate analogy for the Trump crime family. With particular emphasis on the “Family” part. In a segment on his “Real Time” program on HBO Friday night he painted a picture of Trump and Company as typical of the common thugs associated with the Mafia. It was an insightful – and hilarious – six and half minutes of bruising truth. He came out swinging with this depiction of the genesis of Trump (video below):

“New York City has to stop exporting its garbage to the rest of America […] The city’s most toxic trash has been carted off to Washington, D.C.” (with picture of Donald Trump, Michael Cohen, and Rudy Giuliani).

Maher goes on to describe these wondering New Yorkers as “What the heartland used to call ‘assholes.'” He wonders why the people from “real America” likes these guys now. Then he asks:

“How did the salt of the Earth people get hooked up with the salt in the wound people? […] You’re the ‘my word is my bond’ people. These guys lie just to stay in practice. You’re all about an honest day’s work. Trump watches TV until noon. You’re frugal. They spend like identity thieves who got a hold of your pin number. You’re stoic. Trump’s a whiny little bitch.”

Maher breaks it to the Trump cult that “Now you’re married to the mob. Cause that’s what this administration is: a protection racket.” Maher’s colorful comparison of the Trump Family to the Godfather was stinging in its precision. The corollaries are way to accurate to be ignored:

“Everything Trump does is modeled on the mob. When he was accused of sexual harassment, he brought in Bill Clinton’s accusers to sit in the gallery at the debate. Just like Michael Corleone brought Fat Pentangeli’s brother into court. Who does Trump surround himself with? Disposable lawyers and idiot members of his own family. Who’s his worst enemy? The FBI. Where does his money come from? He’s in construction. […] “What part of this isn’t mob-like? They’re using a front business – in this case the White House – to enrich the family.”

There’s someone else who has made the same link between Trump and the mob. Special counsel Robert Mueller has structured his investigative team much like the ones that went after prominent Mafia bosses. They are probing his relationships with unsavory characters (including Russians). They are digging into his bank records and phone calls. They have been successful in getting insiders to turn states evidence and may even have worn a wire into meetings with the Donald. Mueller’s inquiry follows the same strategies that he has actually used on crime bosses in the past.

Consequently, Trump should be worried. And judging by his frightened reaction to every new revelation, he is. All those tweets screaming little more than “Witch Hunt” and “Fake News” are the best evidence that he is fracturing from the inside out. And while it is a serious unfolding of a dreadful period in America’s history, at least we have a brilliant bit of comic relief by people like Bill Maher to help us get through it.

It really says something when your brand new attorney can’t stop making incriminating statements about you. Rudy Giuliani recently made the news when he publicly announced to the world that Donald Trump reimbursed his personal lawyer, Michael Cohen, for the $130,000 hush money payout to Stormy Daniels. That was something that Trump had been denying for months.

Following that gargantuan gaffe, Giuliani went on a whirlwind tour of the media with clarifications that only made matters worse. If we didn’t know better, we’d think that he’s working for Robert Mueller and giving the special counsel more evidence of Trump’s guilt. What else could explain his relentless trashing of his own client?

Well, he’s done it again. On Friday Giuliani gave an interview to the Huffington Post wherein he sought to defend Trump from allegations arising out of Cohen’s suspicious financial dealings with a variety of corporations that have obvious interests in Trump’s decision making. Cohen took in millions from the likes of Novartis, Korean Aerospace, AT&T, and even a Russian oligarch connected to Vladimir Putin. All of these funds were funneled through the same account Cohen used to payoff Stormy Daniels.

The AT&T payola holds special significance to Trump considering their still pending merger with TimeWarner (parent of CNN). Trump’s Justice Department is currently suing to block the deal. So any involvement by Trump would violate both legal ethics and his statement that he would not interfere. Giuliani’s latest verbal misfire was launched while attempting to clear Trump of the perception that he was being influenced by Cohen and the money received from AT&T. Giuliani said that:

“Whatever lobbying was done didn’t reach the president. He did drain the swamp … The president denied the merger. They didn’t get the result they wanted.”

OK then. So Giuliani is now contradicting Trump’s assertion that he wouldn’t get involved. Giuliani is explicitly saying that Trump did step in to deny the merger. In effect, Giuliani is calling the President a liar. And as if to confirm Giuliani’s assessment of Trump as less than honest, Trump himself joined in with a tweet saying:

Why doesn’t the Fake News Media state that the Trump Administration’s Anti-Trust Division has been, and is, opposed to the AT&T purchase of Time Warner in a currently ongoing Trial. Such a disgrace in reporting!

Of course, the media has reported that repeatedly. But more to the point, Trump is agreeing with Giuliani that the opposition to the merger is proof that Trump wasn’t improperly influenced by Cohen and AT&T. Which would only be true if the premise that Trump had something to do with it holds. Therefore Trump is now calling himself a liar for saying that he had not interfered.

Saturday morning Giuliani was once again walking back something he said that hurt his client in the White House. He told CNN’s Dana Bash that Trump didn’t interfere after all. So the merger is still being contested by Trump’s Justice Department, which Trump proudly boasted about in his tweet. It’s just not because of anything that Trump said, allegedly, despite Giuliani’s previous statement and Trump’s months of bashing the merger on the campaign trail.

If this is confusing you, you’re not alone. There has to be a reason that AT&T would pay Cohen $600,000 after Trump’s inauguration. Cohen has no discernible skills or knowledge relating to the communications industry or mergers and acquisitions. What he had to sell was access to the President. AT&T now says that their contract with Cohen was a mistake. Obviously, since the DOJ is still suing them. But the fact that the merger is still being contested in court doesn’t exonerate Trump. It just reveals that Trump hates CNN even more than he loves money. And he doesn’t care who he has to screw over to achieve his goals.

UPDATE: Giuliani is now telling CBS News that he’s standing by his Friday comments that Trump denied the merger. So we’re back to Trump interfered. Is anyone else getting nauseous?