What happened on Tuesday night was not a debate. It was an unprecedented and disgraceful debasement of the proud tradition of American political discourse. Donald Trump managed to embarrass himself (and the nation) to a degree that exceeds every other incidence of his doing so. And that’s really saying something. He’s validating a recent poll wherein a majority of voters said that Trump doesn’t have the mental soundness to serve. 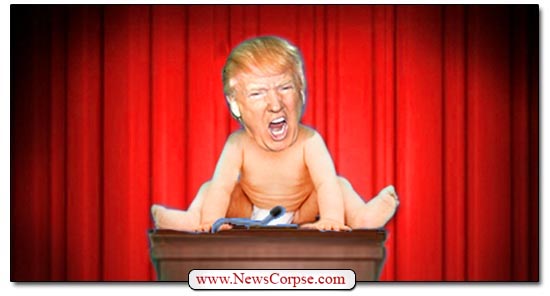 Prior to the debate, Trump was laying the groundwork to make excuses for what he apparently believed was his inevitable loss. Those excuses consisted primarily of bizarre conspiracy theories. Trump also made the preposterous accusation that the debate moderator, Chris Wallace, was “controlled by the radical left.” And Trump’s GOP confederates were convinced that Biden would be cheating by being smarter than Trump. How devious.

Among the rhetorical atrocities uttered by Trump was his abject failure to call on his white supremacist supporters to refrain from violence in the event of his electoral loss. Trump was incapable of making a simple statement condemning all violence, as Joe Biden did. Instead, Trump gave a shout out to the racist Proud Boys, telling them to “stand back and stand by.” It was as if he was issuing orders as their commander. And that’s precisely how Trump’s racist militias interpreted it.

However, the most pronounced departure from civility during the debate was Trump’s repeated and incessant interruptions of both Biden and Wallace. And he made these interruptions in order to squeeze in as many flagrant lies as possible in the limited time available. CNN’s fact checker, Daniel Dale, documented the avalanche of untruths throughout the debate. What follows are some of the most blatant and shameless examples of deliberate dishonesty ever recorded in a presidential debate (as enumerated by Dale in his live tweeting). Or as Dale describes it…

“This president is a serial liar who keeps serially lying. This is just so much dishonesty on the biggest stage by the President of the United States. […] This is always what it’s like with Donald Trump. This is what it’s been like for five years. Basically any unscripted event featuring Donald Trump will feature a huge quantity of false claims. […] Trump is an unprecedented liar in the Oval Office. […] You’re be hard pressed to find literally any subject on which the American people can, right now and over the last five years, have been able to take Donald Trump at his word.”

CNN's @ddale8 says his biggest takeaway from the debate is "this president is a serial liar who keeps serially lying": "Trump is an unprecedented liar in the Oval Office" https://t.co/ZCKOFCvHyZ pic.twitter.com/GluPaxWbP7

It’s not true Biden would “extinguish” the private insurance of 180 million people. He opposed the Sanders-style “Medicare for All”

Trump didn’t “ban” travel from China or Europe. He imposed travel restrictions with numerous exemptions — for US citizens, green card holders, many of their family members — and the Europe restrictions exempted entire countries.

Trump lies that he was talking “sarcastically” when he mused about injecting disinfectant to fight the virus.

Biden has not proposed a shutdown or put forward a shutdown plan. He said in an August interview that he’d shut things down *if scientists said that was necessary in a virus crisis.*

No basis for Trump to claim that there have been no problems from his big pandemic-era rallies. [Just ask Herman Cain]

There’s no evidence Biden acted corruptly or improperly re the Ukrainian prosecutor.

It’s false that Biden does not have “any” law enforcement support [via Fox News].

Our suburbs would not be “gone” if Biden was elected.

Kellyanne Conway DID say more violence was good for Trump’s prospects; she said on Fox that “the more chaos and anarchy and vandalism and violence reigns, the better news for the very clear choice on who’s best on public safety and law and order.”

“Unsolicited” ballots are not fraud prone.

A post-debate poll of debate watchers by CNN is an early indicator that Trump’s rudely Neanderthal behavior has succeeded only in sabotaging his own already floundering campaign. Biden was judged by a solid majority to have won the debate (60-28%). He was seen as being more truthful (65-29%). A majority of voters said that they trusted Biden more than Trump on critical national issues like racial inequality (66%), health care (66%), the coronavirus outbreak (64%), and Supreme Court nominations (54%). And while most respondents (57%) said they were unlikely to change their vote, those who were moved were three times as likely to have moved into Biden’s camp than Trump’s (33-11%). And overall favorability was strongly on Biden’s side (62-35%).

This is more bad news for Trump who was already lagging in every national poll, as well as most of the crucial battleground state polls. What this says for the future of the debate schedule is hard to predict. Biden would have justification for not participating in any more of these Trump-induced psyche ward rumbles. But the next debate has a town hall format and it would be interesting to see if Trump would insult the voters to their faces. Either way, expect to Trump to become even more despicable and deranged. Because, as Biden said with regard to Trump’s negligent and and incompetent mishandling of the coronavirus pandemic, “It is what it is, because you are who you are.”