The Speaker of the House of Representatives is one of the most powerful positions in American politics. The person in that post is second in the line of succession to the presidency, and has the power to appoint every committee chair and to determine what legislation will be considered. However, the current occupant of that post, John Boehner, hardly exerts the influence that comes with it.

To the contrary, Boehner has presided over an embarrassing reign of failure and capitulation. The tiny Tea Party cell of extremists in the House has utterly dominated Boehner and reduced him to a dysfunctional figurehead who cannot complete even the simplest tasks of governing. 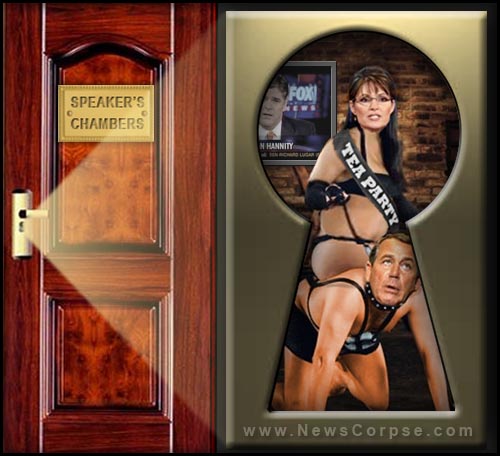 Boehner has a historic opportunity to shepherd several initiatives through the House that would advance the welfare of the nation economically, socially, and diplomatically. Congress has an immigration reform bill before it with broad bipartisan support. There is also legislation that would prevent felons and mentally ill people from having access to guns. Both of these proposals could pass now with a coalition of votes from both Republicans and Democrats.

The Continuing Resolution currently being debated would fund the government at levels that the Tea Party had previously supported. But now they are acting to obstruct it because of their obsession to defund ObamaCare. The insertion of language to cripple or delay the Affordable Care Act is a deliberate attempt to shakedown Democrats in order to get rid of it under the threat of shutting down the government and creating economic distress for the whole country. That’s how desperate zealots who don’t care about anything but their own narrow self-interests operate.

Of course, Boehner has a choice to succumb to this extortion by fanatics or to represent the American people. What Boehner seems to fail to understand is that he is the Speaker of the whole House, not just the Republican caucus – and certainly not the Tea Party. Yet he feels compelled to obey an unwritten rule that only legislation that receives a majority of Republican votes will be brought to the floor. That is a perversion of democracy. The House is the people’s branch of government and ought to reflect their will.

What Boehner is afraid of is the possibility that he will offend the two dozen or so Tea-hadists and put his speakership in peril. So he chooses to acquiesce to their demands while ignoring the other 200-odd members of his caucus. If he were a real statesman, he would craft a legislative agenda that appeals to both Republicans and Democrats and actually pass bills that become law. That is, after all, his job. Instead, he presides over the most unproductive congress in history.

Boehner needs to ask himself what he sees as his role and what he hopes for as his legacy. The way he’s going he will be remembered as a weak hand who surrendered to a noisy faction of outliers while pursuing his own selfish interests. He will have empowered an otherwise small and unpopular group of ignorant malcontents by granting them more attention than they deserve. And he will lose his post whether or not the Republican Party retains a majority after the 2014 elections.

It is really rather pathetic that The Tea Party, which is languishing at near all-time lows of favorability, has such a stranglehold on this congress simply because the guy running it is such a quivering wimp.

13 thoughts on “Tea Party Shakedown vs. Shutdown: The Shame Of Being Boehner”