An odd item appeared this morning on the Fox News web site attacking the progressive organization MoveOn.org. It was the sort of substanceless filler that generally appears on rabid anti-Obama fringe sites. Beneath a headline reading “MoveOn.org tries to sideline Tea Party over shutdown fears,” the article revealed the shocking news that MoveOn.org is a liberal outfit that is seeking donations. You don’t say?

In the few paragraphs posted, Fox included a defamatory reference to a passage in MoveOn’s email that said “If we play our cards right, 2013 could become known as the year the tea party relegated itself to the dustbin of history.” In an effort to manufacture a negative association, the article asserted that the phrase “dustbin of history” was “borrowed” from Leon Trotsky. In fact, the phrase and its variations had been in use long before Trotsky uttered it, and it has even been used by Republican candidate for sainthood, Ronald Reagan, who said in June of 1982 “The march of freedom and democracy will leave Marxism and Leninism on the ash heap of history.”

The reason that this article was loaded with such blatant conservative rhetoric quickly became apparent. The item was sourced to a web site called Watchdog.org that presents itself as sort of a wire service. However, Watchdog.org is actually a right-wing, propaganda-spewing project that is funded by the Koch brothers through their Franklin Center for Government and Public Integrity. It is an unabashedly partisan source of slanted opinions and attack pieces. But now Fox is utilizing it as an affiliated reporting service. In effect, the Koch brothers have co-opted Fox to get their Tea Party agenda disseminated to Fox’s national audience in the guise of journalism. 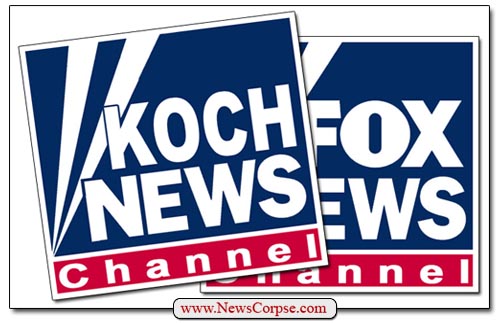 As an example of the deceit employed by Watchdog.org, they castigated MoveOn for its early support from George Soros and for “putting a bulls-eye on the conservative Koch Brothers.” However, while defending the Koch brothers, nowhere in the article did the authors disclose that they actually work for the Koch brothers. That’s a pretty egregious omission. Furthermore, as a measure of their journalistic neutrality, the Watchdog reporter sought out quotes from four people for the article: the chair of the Tea Party Express, the chair and vice-chair of the Virginia Tea Party Patriots Federation, and the chair of Tea Party Fort Lauderdale. Fair and balanced, my ass.

A quick Google search on Fox News, and their related Fib Factory Fox Nation, turned up dozens of previous Watchdog-sourced articles that were published by Fox. Many of these articles are hit pieces on unions and environmental science, two issues that deeply interest the Koch brothers whose businesses have fought workers rights and have contributed to dirtying the air and water of every place they have a presence. In none of the articles did Fox provide disclosure of the Koch affiliation to the reporting.

It is clear that the infiltration by the Koch activists is complete. Fox News has long been associated with the conservative politics of the GOP, the Tea Party, and right-wing enterprises like Breitbart News, the Drudge Report, and even WorldNetDaily. But now they have turned a corner and embraced the brazen biases of an activist corporation with vested interests in the stories they pretend to cover. So now, in the warped universe of Fox News, corporations are not only people, they are also journalists. And if, like the Koch brothers, you can afford to create your own fake wire service, you can get fake news networks like Fox to distribute your PR.