As the first woman to be put on the Republican Party’s presidential ticket (thirty years after the Democrats did it), Sarah Palin likes to portray herself as the real voice of feminism. Never mind that she opposes most of the main tenets of the movement involving reproductive health, equal pay, and non-discrimination, in the wake of the release of a revolting new video showing NFL running back Ray Rice punching his then-fiance, Palin has been conspicuously silent. 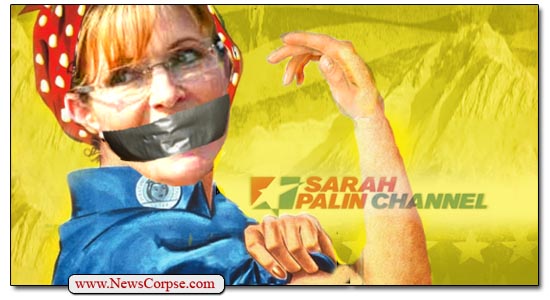 For someone who pretends to be an advocate for the right’s of women, it is extraordinary that Palin has not made a single public comment about this atrocity. However, it is not surprising when viewed in the context of her political career. After all, she was on a presidential ticket with John McCain, who voted against the reauthorization of the Violence Against Women Act. As governor she presided over the state with the highest rates of rape, sexual assault, and domestic violence in the U.S. She posted ads that put women politicians in the crosshairs of a rifle sight. And while she hails her choice with regard to the birth of her special needs son, she wants to deny other women the same choice.

Other conservatives are adamant that President Obama speak out about this affair (which he did), but do not make the same demands of Republican leaders, including Palin. Fox News host Andrea Tantaros (who thinks the whole thing is Obama’s fault) said of congresswoman and chair of the Democratic National Committee, Debbie Wasserman-Schultz, that she “should come out and condemn this, and if she doesn’t, she’s an apologist for domestic violence.” So is Sarah Palin an apologist for domestic violence?

In addition to Palin’s silence on this matter, she has not been particularly talkative in general. In a departure from her longstanding pattern of media narcissism, and hijacking every television camera in her vicinity, Palin has been noticeably absent from the press stage lately. This may be because the media has become weary of her word-salad inanities, or they may be shying away after her embarrassing rants about impeaching President Obama. However, that doesn’t explain why she isn’t even posting on her own brand new, highly touted, Sarah Palin Channel on the Internet. The most recent posting was three days ago. You have to wonder whether those who are actually gullible enough to pay ten bucks a month to watch her ramble are getting their money’s worth.

For anyone who is curious about what a subscriber to Palin’s channel would get, here is a posting from last week on “Obama’s Judicial Power Grab.” It is an unintentionally hilarious lecture on why Obama is an “imperial president” because he is exercising his constitutional duty to appoint nominees to judicial vacancies.

My favorite part is where Palin implies that she has caught Obama telling a group of donors something nefarious by saying that “We’re going to have Supreme Court appointments.” WOW! What a scoop. If anyone can make any sense of this incoherent mush, please feel free to comment.