Like clockwork, anything bad that happens anywhere in the world is somehow connected to President Obama. It was either caused by something he did, or something he didn’t do, or it requires him to comment, or to refrain from commenting, or in short, do whatever is the opposite of whatever he did, or thought about doing, or was predicted to do by dimwitted media pundits.

This morning a video was released that showed the actual assault committed by NFL running back Ray Rice on his then-fiance – now wife- Janay Palmer. It is a nauseating piece of video that captures Rice knocking out Palmer with a single punch.

So, of course, when the subject came up on the Fox News program Outnumbered (whose premise is to pit four women co-hosts “against” a rotating male guest host), someone had to immediately figure out a way to blame the whole incident on Obama. That chore fell to Fox’s Andrea Tantaros who obliged by saying that…

“My question is — and not to bring it back to politics but — this is a White House that seems to bring up a ‘war on women’ every other week. […] I wanna know, where is the President on this one?”

Really? Tantaros claims to not want to “bring it back to politics,” so she promptly castigates Obama for – who knows what. The President has spoken out repeatedly on the subject of domestic violence. Must he now have something to say about every occurrence of it? And if he did address it, you know with certainty that rabidly partisan hacks like Tantaros would criticize him for inserting himself into a criminal matter, demeaning his office, and politicizing the affair.

At the same time Tantaros cavalierly dismisses the GOP’s“War on Women” which refers to their agenda of anti-woman policies addressing reproductive health, equal pay, discrimination, and, yes, domestic violence and other criminal acts. These are very real concerns to women, who have expressed their opinion as to who better represents their interests by voting overwhelmingly for Obama and other Democrats.

Ironically, at almost the same time that Tantaros was slandering Obama for not dropping everything, including the fight against ISIL and other terrorists, to deal with this single case of domestic violence, the White House was making a statement affirming the President’s position. Noting that he cannot address a specific criminal act because it could prejudice any subsequent legal proceedings, the President’s spokesman said that “this administration and this president do believe strongly that the scourge of violence against women needs to be combated. […] it is not and cannot be tolerated.”

Furthermore, it was this president who signed the reauthorization of the Violence Against Women Act, which a majority of those in Tantaros’ Republican Party voted against. In fact, all of the “no” votes in the House and the Senate were Republicans. Not a single Democrat voted against it.

Tantaros has a history of offensive statements on this subject. In 2011 she came to the defense of Herman Cain after he had been accused of sexual harassment by several women. Tantaros initially called one of Cain’s accusers a “scam artist,” but after it was clear that he was guilty, Tantaros floated a new defense blaming the victim. She asked “At what point do women need to take some responsibility?”

For Tantaros to now not-so-subtly inject Obama into this scandal is obscenely offensive. Especially when she herself could more easily be tied to Rice’s repulsive behavior if someone were looking for such a connection. Last year, after maligning the United States as being “like the Soviet Union,” Tantaros turned her wrath on the American citizens who exercised their rights in a free democracy by casting their votes for Obama. She said that…

“…a lot of people voted for [Obama]. And if you see any of those people today, do me a favor. Punch them in the face.” 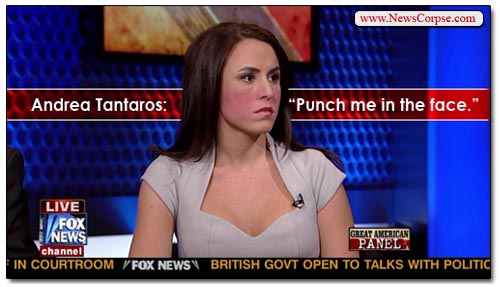 So you have to wonder if perhaps Janay Palmer revealed to Rice that she voted for Obama and he responded by following Tantaros’ advice. After all, Tantaros is clearly not opposed to people being physically assaulted for their political beliefs. And she didn’t give any exemption to women who voted for Obama.

Obviously that’s an absurd scenario, and the only purpose in presenting it is to illustrate just how absurd Tantaros is for grasping at ridiculous reasons to associate everything bad with Obama. And as if this weren’t bad enough, another episode played out earlier in the day on Fox News when Brian Kilmeade of Fox & Friends thought it would be “funny” to offer his opinion of the lesson to be learned from the Rice incident. Kilmeade said that “I think the message is – take the stairs.”

Very funny, Fox. Way to trivialize a brutal beating of woman by a professional football player. Tantaros may wonder where President Obama is on this, but we all know where Fox News is. [Update: The following day, Brian Kilmeade addressed the “joke” about taking the stairs by saying only that their comments “made some feel like we were taking the situation too lightly. We are not. We were not.” That’s it. No apology or retraction or acknowledgement that the joke was vulgar and inappropriate. In effect, he blamed the audience for how they felt about it].

[Addendum] Apparently in search of extra points for being disgusting cretins, Fox News contributor (and Tea Party darling/presidential candidate) Ben Carson actually came to Rice’s defense saying “let’s not all jump on the bandwagon of demonizing this guy.” If not Rice, then who? Funny that Carson has no problem demonizing President Obama.