On Tuesday Fox News broadcast an episode of their “Entitlement Nation” series that made some startling claims about the Supplemental Nutritional Assistance Program (aka food stamps). What was not startling was that they got it all wrong (as reported here on News Corpse). Fox & Friends co-host, Abby Huntsman, asserted that “$70 million of taxpayer money was wasted on food stamp fraud.” Then she asked “Is it time to end the program altogether?” Because eliminating a program that keeps millions of kids and seniors from starving is preferable to looking for ways to reduce a minuscule amount of alleged fraud. 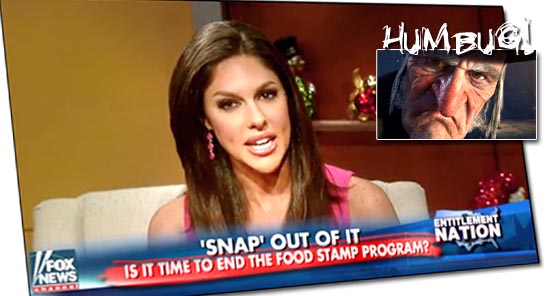 Now the U.S. Department of Agriculture has weighed in to chastise Fox for their “mistakes.” They wrote to the network asking them “to correct a report from Tuesday morning’s edition of ‘Fox & Friends’ alleging new heights for food-stamp fraud in the United States.” They stated that the agency had not issued any data for 2016 and that they didn’t know where Fox was getting their info. Except to say that “We saw that there was a story on Breitbart.”

So Huntsman aired a retraction of her dangerously false food stamp story Friday, saying that the data she cited was incorrect. However, she went on to assert another falsehood saying that the “correct” number for food stamp fraud was $853 million for the three years from 2009 to 2011. In fact, that number refers to any errors (i.e. under/over payments), not just fraud. And it’s still an uncommonly low error rate. What’s more, Fox removed the original story from their website, leaving only a correction but no indication of what they corrected. That is not how ethical journalists operate.

So now that Fox has apologized for reporting false information, will they also retract their suggestion that the SNAP program be eliminated? Not likely. Fox News and the Republican Party have opposed virtually every social welfare program, including Social Security and Medicare. And they are currently obsessed with repealing ObamaCare. They are devoted to making life more difficult for people who are already undergoing hardship. While simultaneously they strive to make life easier for the wealthy by reducing taxes and regulations that benefit the population at large. So merry Christmas and happy new year from Fox News.