If there is one thing for which Glenn Beck deserves some measure of credit, it is his ability to promote himself and inflate his influence on the media, and in society, outside of all proportion to reality. The way he is portrayed in the press would give a neutral observer the impression that he is the most beloved public figure in the country with a growing following that dwarfs his contemporaries.

Of course the truth is that Beck is hated as much as he is loved. And in most polls the highest percentage of respondents are those that have no opinion or haven’t even heard of him.

The most recent ratings for his Fox News program bear out these statistics. Even though Beck gets far more attention than his Fox colleagues, his program is not a top performer and it is not growing. In fact, it is the network’s biggest loser. 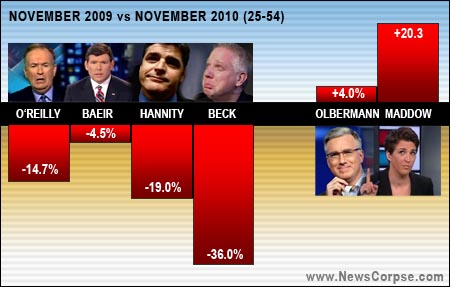 In the past year Beck has dropped from 2.67 million total viewers to 2.30 million, down 14%. In the key 25-54 year old advertising demographic it’s even worse. He sank from 678,000 to 434,000, a drop of 36%. Keep in mind that the mid-term elections this year ought to have made his program more pertinent and compelling to his audience rather than less, yet he still underperformed last year’s numbers by a huge margin.

Beck’s deteriorating numbers came on the heels of his vaunted “Restoring Honor” rally in Washington, DC. Apparently that did nothing to restore his ranking. And two months later Jon Stewart and Stephen Colbert rubbed salt in his wounds by hosting an even bigger rally. It is also notable that in the same time frame both Keith Olbermann and Rachel Maddow improved their ratings.

During the past year Beck trotted out some unusual news that some cynics may regard as attempts to boost viewership. On one program he announced that he might be going blind. A few weeks later he disclosed that he was being treated for some sort of nerve ailment that resulted in a loss of feeling in his hands and feet (the Stigmata?). He has said nothing about these traumatic incidents since.

The scope of Beck’s ratings failure is not trivial. his decline far exceeds those of his Fox comrades. He routinely places fourth in the Fox lineup behind O’Reilly, Baier, and Hannity. That is pretty low for someone who is being hailed as the network’s star attraction. His ratings are a full 40% below Bill O’Reilly, who doesn’t get nearly as much press as Beck, at least since Beck came aboard. That’s gotta buzz Billo’s beak.

Along with Beck’s dismal ratings picture, he is also a money drain on Fox News. Over 140 American advertisers have pulled their ads from Beck’s show. In the UK Beck has been airing for months with no advertising at all.

You have to wonder why Fox News keeps Beck around when he is neither a source of ratings or revenue. And increasingly he is the network’s greatest source of embarrassment. His ravings are becoming ever more distant from reality (see Glenn Beck Unhinged for copious documentation). The range of his dementia begins with the eminently mockable frightfest he hosted surrounding his assertion that the government is plotting to induce mass starvation via the Food Safety Act. But just when he seems like the rodeo clown he calls himself, he veers into the repulsive bigotry and overt anti-Semitism of his disgraceful and lie-riddled series on George Soros. It would be naive to dismiss him as the joke he often appears to be when he is also capable of incendiary hate speech that has already incited real world violence.

There are only two plausible excuses for keeping someone like Beck on the air:

1) Beck represents the views of the people who employ him and their determination to advance those views supersedes their obligation to produce popular or profitable programming. That would fit the profiles of both Roger Ailes and Rupert Murdoch. Ailes is unambiguously partisan and has crammed the Fox lineup with staunch conservative activists in the role of reporters and hosts. At least four potential candidates for the GOP nomination for president are currently on the Fox News payroll. Murdoch has demonstrated his preference for ideology over profit by deficit financing many of his notoriously biased news operations for many years. And the disclosure of his million dollar donations (via News Corp) to the U.S. Chamber of Commerce and the Republican Governor’s Association remove all doubt as to his activist intentions.

2) Beck’s bosses are afraid to terminate him due to the rabid idolatry of his fan base. Even though Beck’s audience is relatively small and shrinking, they are an unstable lot and they would make a fierce roar of anguish were Fox to cut Beck loose. Whether that would manifest violently with threats to the network or its principles is unknown, but not implausible. They would certainly create a media maelstrom. The cultish worship of Beck approaches Messianic proportions. He even speculates on air that he is the target of death threats and that evil, clandestine forces are gathering to silence (crucify?) him. Just imagine how he would spin his cancellation as persecution, and all of his disciples would believe it.

If the suits at Fox News had any integrity they would cancel Beck tomorrow. That’s how television networks work. You bring in either money or viewers or you get the axe. It’s not censorship. It’s called a free market, and I thought right-wingers were supposed to support that. News Corp and Fox executives have a fiduciary duty to shareholders to return profit on their investments, but they are shirking that duty for either ideological of cowardly reasons.

Perhaps it is the shareholders who should revolt and demand that action be taken to restore fiscal responsibility. Either Beck goes or the brass that are too incompetent to do what’s right and necessary do. I’m holding my breath starting . . . . . . . . Now.