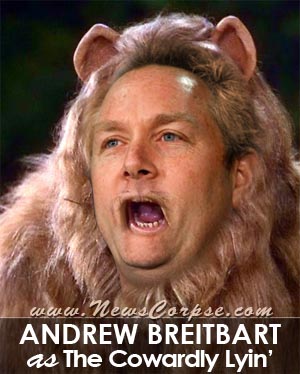 Jon Lovitz used to have a character on Saturday Night live known a the “pathological liar.” He would simply make up things to impress his associates and, as he settled on the perfect deceit, would exclaim, “Yeah, that’s the ticket.”

Andrew Breitbart has taken this notion to new levels. His capacity for dishonesty is boundless and entirely devoid of shame. The latest episode in his recurring series of video lie-fests takes place at the University of Missouri in Kansas City. The video posted at his BigGovernment blog shows a professor and a guest lecturer engaged in a discussion that includes statements that imply they are advocating violence on behalf of labor interests. “Yeah, that’s the ticket.” The only problem with this expose is that, like just about everything else Breitbart does, it isn’t true.

Judy Ancel, Director of Labor Studies at UMKC, is the professor in the video. She responded to Breitbart’s smear in an email with several examples of how Breitbart fiddled with the content to deliberately convey a meaning that did not exist in reality. For instance, she writes…

Breitbart is a master of taking quotes out of context, deletion of what doesn’t serve his purpose, and remixing to achieve totally different meaning. For example he has me saying:

o Breitbart’s version: “Violence is a tactic and it’s to be used when it’s the appropriate tactic.”

o The real version: After students had watched a film on the 1968 Memphis Sanitation Workers’ Strike and the assassination of Martin Luther King, they were discussing nonviolence. I said, “One guy in the film. . . said ‘violence is a tactic, and it’s to be used when it’s the appropriate tactic.’. . . ” The class proceeded to discuss and debate this.

It is apparent that Ancel was quoting somebody in the film, not expressing her own views. This is typical of Breitbart and his ilk. It is the point I was making when I posted this video of Glenn Beck admitting that he idolizes Adolf Hitler:

Media Matters has some of the obviously manipulated video as well as the uncut versions that reveal Breitbart’s purposeful deception.

This project has all the earmarks of Breitbart’s modus operandi. It is precisely what he did to Shirley Sherrod. It is the very same tactics he used against ACORN, along with his protege, James O’Keefe. However, there are no credits for the video other than the name “Insurgent Visuals.” It’s odd that no one would want to take credit for what they must regard as a brilliant piece of investigative journalism.

However, after some investigation of my own, I discovered that Insurgent Visuals has a web site. Surely there would be some indication of who was responsible for this story. Nope. Just a short statement on their “About” page saying “We are a small collective of motivated political actionists intent on changing the world.” They are also intent on hiding their identity.

So I continued my investigation and discovered that Insurgent Visuals also had at one time a blog at BlogSpot. The blog was no longer available, but I was able to access it via Google’s cache. Once there I noticed that the blog’s contributors were Bruce Bronson, and some guy named — James O’Keefe! Who’da thunk it? So O’Keefe, a well-known lying video manipulator may have had an invisible hand in Breitbart’s new anonymous smear campaign. He’s certainly the guy I would call if I wanted to produce a phony videotaped assault on someone.

Prof. Ancel’s response to the video is worth reading in full. It outlines the dishonesty that Breitbart perpetuated as well as her outrage at having the privacy of her students violated and the forum for free expression in the classroom replaced with a chilling mood of fear and distrust. The email in full follows:


I am Judy Ancel, director of the Institute for Labor Studies at the University of Missouri-Kansas City. While my university prepares its response, I feel compelled to answer the attacks by Andrew Breitbart on my character. I am speaking as an individual and certainly not for UMKC. I am speaking out of my strong lifelong commitment to educating working people to better understand the world they live in. Labor education is a vital part of anyone’s education. All Americans, especially our youth, need to understand the contributions working people have made and make in building our communities and nation. Labor education gives them the skills and vision to make a better world.

My students and I are outraged at Mr. Breitbart’s invasion of our classroom and his attempts to intimidate us and my colleagues at the university. Mr. Breitbart’s chop shop manufactured videos from 30 hours of classroom recordings that were posted for the course, “Labor, Politics, and Society,” on the university’s Blackboard system. Presumably these were delivered to him by a student, in possible violation of the University Standards of Conduct and the Federal Family Educational Rights and Privacy Act. These videos were recorded for the use of students enrolled in this course, and for them only. Breitbart disassembled the material, and reassembled it; arranging them to give the appearance that instructors of the class advocate violence. This is in fact the opposite of the position both instructors took in class. Any examination of labor’s past would be incomplete without discussion of violence, (which for the most part was directed at workers) and analysis of its roots. At no time did my co-instructor, Don Giljum, nor I advocate violence.

There’s no doubt that Breitbart’s attacks are politically motivated, part of a broad agenda to weaken unions and the public sector as well as public education. His fabrications have been exposed numerous times in the mainstream media. Yet he and his echo chamber at Fox News continue to cause great harm to educators and other public servants.

On April 18th Breitbart announced his intentions on Fox News Sean Hannity show: “We’re going to take on education next, go after the teachers and the union organizers.” It is possible that his attack on the University of Missouri and labor education is his first assault.

Breitbart is a master of taking quotes out of context, deletion of what doesn’t serve his purpose, and remixing to achieve totally different meaning. For example he has me saying:

o Breitbart’s version: “Violence is a tactic and it’s to be used when it’s the appropriate tactic.”

o The real version: After students had watched a film on the 1968 Memphis Sanitation Workers’ Strike and the assassination of Martin Luther King, they were discussing nonviolence. I said, “One guy in the film. . . said ‘violence is a tactic, and it’s to be used when it’s the appropriate tactic.’ . . . “ The class proceeded to discuss and debate this.

Thus Mr. Breitbart’s editing has literally put words in my mouth that were not mine, and they never were mine.

Breitbart leaves out a crucial statement by Don Giljum in order to make it appear that he advocates violence. Giljum said,

o I’m not sure as a tactic today the type of violence or reaction to the violence we had back then would be called for here, and I think it would do more harm than good.” A student then says “and it just legitimizes their dirty tricks.” Giljum agreed with him.

There are a number of other instances of very creative editing including:

o The insertion of a sentence by me about crisis situations taken from an entirely different class about how governments use crises to launch big unpopular changes. This is inserted into my lecture on collective bargaining to make it appear that I am advocating that unions provoke crises in the workplace. I have never advocated that. In fact I make sure students understand the limits of union and individual action under both law and the union contract.

o Making it appear that Don advocates sabotage when his point was about the sad state of labor law and the decline of the right to strike.

These videos are no idle prank. They do real harm. Both Don and I are receiving threats and ugly and scary messages. There are death threats against us on Breitbart’s blog.

These videos are an attack on higher education and its mission to working adults, putting labor education programs at risk. They create fear and have an enormously chilling effect on freedom of thought and expression. They seek to undermine the academic freedom that is required to study, better understand, and hopefully improve our conditions of life. Sadly, they have already shattered the very positive atmosphere of trust and openness that we worked so hard to create in this class. One of my students told me, with some discomfort, “My boss watches Fox News.” Our students’ identities have been compromised. Their right to privacy has been breached, and none of us gave permission for these videos or our images to be placed on the internet. Another student wrote me, “The classroom provides a safe place, or a ‘free speech zone’, where it’s natural that, at times, those of us not used to discussing these topics make inflammatory statements, radical sounding claims etc. that are a part of thinking through the issues and emotions surrounding them. It seems to me that a classroom can be a healthy place to do so, because of the ground rules that are set: everyone gets a chance to speak, respect for opposing views is expected and so on.”

And of course these posted videos are an attack on the rights of working people and on anything that is public, including public universities. The right of workers to have a voice in their workplaces and in their economic lives is a human right recognized by freedom-loving people around the world. Education about how to best make those rights a reality should be part of every school’s curriculum, certainly in our universities. Yet this attempt to marginalize it and make teachers and students afraid to discuss it is the antithesis of all we stand for.

These attacks on me, my colleague, and the students in my course are an affront to democracy and must be challenged by citizens, workers and students, or else they will continue.