The Fox News Party candidate for president and former half-term governor, Sarah Palin, did what she does best this Memorial Day weekend: Exploit others to promote herself. 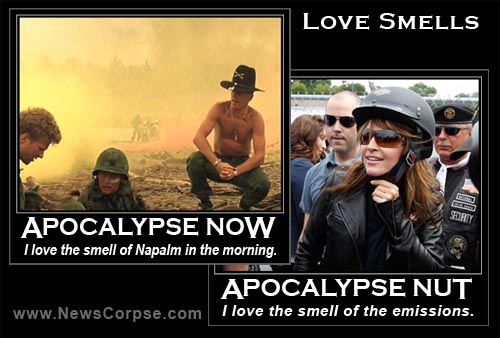 Palin and Fox are playing an unethical and dishonest game to fatten their wallets. When will Fox News either admit that they know she isn’t running for president, or take her off the air until she comes clean? And more importantly, when will the brain-dead media stop salivating every time the Palin bell rings? The press has no more business hyping substanceless photo-ops for Sarah Palin than they would for Ronald McDonald.

By the way, what’s the difference between Fox News and McDonald’s? One sells cheap crap with lots of filler & seasoning to masses with no taste. The other is a fast food restaurant.

[Update] Palin spoke to Greta Van Susteren of Fox News (of course) and complained about the media saying “this isn’t a campaign tour.” and that “it’s not about me, it’s not a publicity-seeking tour.” Of course not. She is only traveling around in a massive custom bus with full exterior graphics of herself and her non-campaign logo, One Nation (stolen from the union rally last year in Washington, D.C.). Clearly she just wants to be left alone.

2 thoughts on “Sarah Palin: From Grizzly Mama To Harley Mama”