In an analysis of Barack Obama’s speech before congress last night, Bill O’Reilly invited Obama’s press secretary, Jay Carney, to the program to discuss the speech and its proposals. As usual, O’Reilly demonstrated his immense capacity for misunderstanding even the simplest concepts. He also reminded us of why no Democrat should EVER appear on his show. Here is how Fox Nation is reporting the exchange: 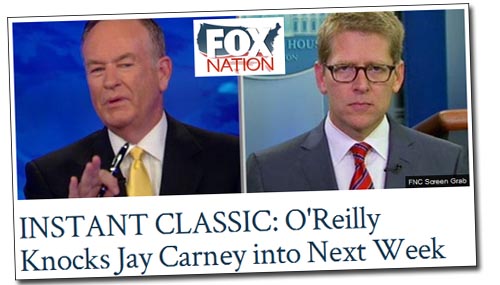 Technically, if Carney has been knocked into next week, then he’s ahead of the rest of us. Which is far better than living in the past like O’Reilly whose crusty and outdated approach to issues has proven to have failed unambiguously.

Much of the conservative media is disseminating the same absurd and false argument that O’Reilly made. The part of the interview that is making the rounds amongst the right-wingers this morning revolves around the example Obama gave of the inherent unfairness in the tax code:

“Right now Warren Buffett pays a lower tax rate than his secretary — an outrage he has asked us to fix.”

That is an objectively true statement. But that didn’t stop O’Reilly from pouncing on it with a fierce conviction of his righteousness as he demanded that…

“You’ve got to stop with Warren, OK? Warren is 88 years old or something. He says his secretary pays more tax. It’s not true. He’s talking about two different things. […] He’s talking about capital gains, Warren Buffett. The secretary pays federal income taxes, it’s two different taxes. But Warren and the president are trying to fool us. Stop it.”

Actually, the difference between earnings derived from capital gains and those derived from labor is immaterial with regard to reporting income. They are both subject to income taxes, (albeit at different rates) and are both reported as income on an income tax return. As can be clearly seen here: 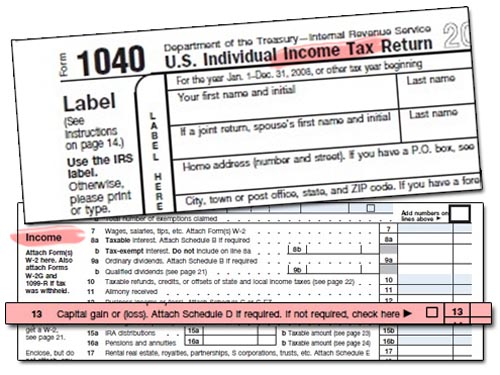 So contrary to O’Reilly’s lunk-headed theories, anyone who receives income, whether from capital gains or wages, pays federal income taxes. For O’Reilly and the rest of the right-wingnuts to deny it is foolish and/or dishonest. The points that both Obama and Buffett are making is that different types of income are being taxed at different rates and that the result is one that favors the rich.

The tax benefits enjoyed by wealthy folks like O’Reilly were put in place by legislators who respond to big donations from the very people who will receive the benefit. It is not surprising to hear O’Reilly and other elitist media pundits defend that system of reward. What is surprising (and sad) is that there are so many deluded, middle-class citizens who have allowed themselves to become lackeys of the master-class. The Tea Party is a pathetic example of the doctrine of the “useful idiot” who can be exploited to work on behalf of policies that are demonstrably harmful to their own interests.

Hopefully the ever more transparent greed of the 1% of the population that is hoarding most of the nation’s wealth will motivate the majority to rise up in opposition to the unfairness of the current situation. This is the time to make your voice heard. Your representatives and your local media need to know what the people are thinking. They can’t read minds. So do them and yourselves a favor and speak up – NOW!