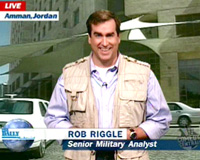 The Daily Show is going to war. The show whose star, Jon Stewart, condescendingly refers to it as “fake news” is sending their very own correspondent on assignment to Iraq next week. Rob Riggle will anchor Operation Silent Thunder from, as the press release puts it, “actual Iraq, not greenscreen Iraq.”

Two years I ago, I wrote that The Daily Show does a better job of representing honest journalism than many of the organizations that they mock (see The Real Fake News). It was not an attempt to be cute or dismissive. There is evidence to support the argument:

The show has won five Emmys. It won a Peabody award for election coverage. The Columbia Journalism Review included Stewart on its list of the nation’s 10 most influential political reporters. Newsday placed Stewart on their list of the 20 media players who will most influence the 2004 campaign.

Most of those awards were not bestowed for entertainment, they were honoring the program for its news content. That said, it is still still a comedy program, not a news program. But it also performs the function of a media watchdog, alerting us to the hypocrisy, collaboration, and contrivance of the corporate-dominated media.

Now with Riggle joining his colleagues in the war zone, the lines between reality and satire (satirealityâ„¢) are becoming ever more blurred. It is important to note that Riggle is not just a comedian doing shtick on a new stage. He is a decorated veteran whose service as a U.S. Marine can inform his “reporting” in unique and invaluable ways. He is a comedian with “more than 19 medals and ribbons, including the Combat Action Ribbon,” for service in Liberia, Kosovo and Afghanistan.

A correspondent who has had tours of duty in both Operation Enduring Freedom and the Rubber Chicken Circuit, is a rare asset for any media outfit. I predict that, once again, the fake news will trump the real news on substance. And at the same time they will entertain our weary troops (something the real news can never claim to do) as this trip is being undertaken in conjunction with a USO tour that will also include comedians Horatio Sanz, Rob Huebel and Paul Scheer.

Good luck Major Riggle. Not that you need it. We all know that a Rubber Chicken can beat a Chicken Hawk any day of the week.

One thought on “The Daily Show: Reporting From Iraq”