The chairman and CEO of News Corp, Rupert Murdoch, has been busily Tweeting his support for the Stop Online Piracy Act (SOPA). His point invariably refers to nefarious characters who are trying to steal his intellectual property. And not one for understatement, Murdoch has labeled his opponents as terrorists.

SOPA was drafted in a manner that would not punish any actual content thieves, but would empower the government to shut down any web site that contained a link to pirated material, even if that link was posted by a visitor to the web site or was picked up by an automated process that scans Internet pages. Consequently the law could result in shutting down sites with user communities like Boing-Boing or search indexes like Google.

Today Murdoch posted a Tweet that suggested his support for even more government regulation that could have an effect on his own businesses: 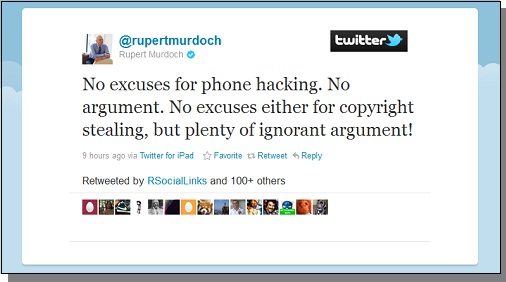 There is something profoundly disturbing about Murdoch connecting the phone hacking scandal, for which his company was responsible, with his campaign against SOPA. The News Corp phone hacking victimized thousands of people. It has resulted in 15 arrests (so far). There have been numerous resignations from News Corp, as well as the British government and police department. It is perhaps the worst scandal an international media enterprise has ever perpetrated. To compare that with a power-grabbing effort to legalize Internet censorship is absurd and ignorant.

However, Murdoch’s Tweet could backfire on him. Think about it. Murdoch believes that passing legislation that permits shutting down Internet sites if they link to unauthorized copyrighted material is warranted and appropriate. And also he thinks there is a connection between that position and the phone hacking scandal. Therefore he must believe that it would be appropriate to shut down any enterprise that engaged in phone hacking. So a SOPA-type law addressing phone hacking would permit the government to shut down News Corp, Fox News, the Wall Street Journal, and other Murdoch entities.

As beneficial to the world’s media landscape as that would be, I cannot endorse it. Murdoch is wrong about SOPA, and he is wrong about over-reaching legislation that grants the government inordinate power over the Internet or the media. He is completely delusional if he thinks there is a connection between SOPA and phone hacking. And the only message he is conveying is that he still doesn’t understand the extremity of the criminal acts for which he and his company are guilty.