His children must be so proud. This Father’s Day Mitt Romney is traipsing around the Mid-West in a bus, doing his best to avoid the press while connecting with the American people – well, at least the Bovine-Americans who came out to support his candidacy and chew their cud. 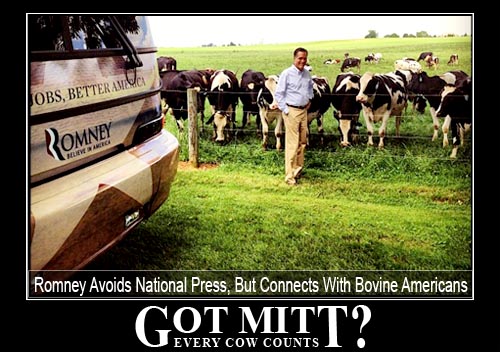 While on his “Every Cow Counts” bus tour, Romney consoled the rain-soaked voters in Ohio by saying of his hope to replace Obama that the country is about to get “a little whiter.” Actually, he may said “brighter,” but his Tea Party constituents know to translate it.

However, the real news that Romney made today was that, in addition to being a flip-flopping Etch-a-Sketcher, he is pathological liar. And I’m not even referring to his dishonest claims about President Obama, his misrepresentations about the economy, or his failure to be truthful about his proposed plans for a Romney administration. What’s really alarming is that he can’t even tell the truth about himself.

Today he told CSPAN that, “I didn’t go to law school, I didn’t practice law, but I like the idea of arguing points back and forth…” Somebody better tell Harvard Law School to demand their diploma back because Romney’s web site says that “After graduating from Brigham Young University in 1971, he earned dual degrees from Harvard Law and Harvard Business School.”

Then on Face the Nation, Romney told Bob Schieffer, “Bob, I don’t have a political career. I served as governor for four years. I spent my life in the private sector.” However, Romney began his non-existent political career in 1994, running for (and losing) the U.S. Senate against Ted Kennedy. Then he ran for governor of Massachusetts in 2002. After one term, he ran for (and lost) the GOP nomination for president in 2008. Finally, he is currently in the midst of his second campaign for president. Somebody should tell Romney that eighteen years of mostly losing doesn’t mean that you haven’t had a political career, it means you had a “bad” political career. (h/t @LOLGOP).

Didn’t go to law school? No political career? These are flat out lies. Twelve years ago, all Al Gore had to do was have one misreported comment about “creating the Internet” get traction in the press and his name became synonymous with “stretching” the truth. Now Romney is telling outright falsehoods about his own past. Will the media hold him accountable? Will he at least become the butt of a few jokes? When someone lies about things they don’t have to lie about, it suggests that it’s just a part of their character. How can anyone take him seriously when he is so brazenly dishonest about himself?

[Update] The quote of Romney about law school was originally reported by ABC News, and that report has since been edited. I located video of Romney on CSPAN and it sounds like he first said that he “didn’t go to law school” and later corrected himself.