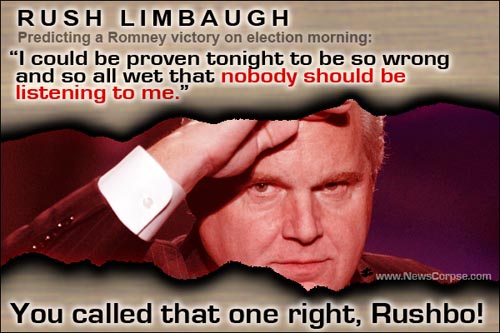 “I could be proven tonight to be so wrong and so all wet that nobody should be listening to me.”

That’s a remarkably candid observation. And one that turned out to be accurate. Although most clear thinking individuals have known for years that nobody should be listening to Limbaugh, now his own listeners have heard for themselves that he is unworthy of their time and attention. Even Limbaugh doesn’t take himself seriously. Take for example this post-election commentary:

“[P]eople have been asking me how I feel all night long. And I got, ‘Boy, Rush, I wouldn’t want to be you tomorrow. Boy, I wouldn’t want to have to do your show. Boy, I’m so glad I’m not you.’ Well, folks, I love being me. I can’t be anybody else, so I’m stuck with it. But the way I feel is this:

I feel liberated, and I’m just going to tell you as plainly as I can why. I no longer am going to have to carry the water for people who I don’t think deserve having their water carried. […] Now, I’m liberated from having to constantly come in here every day and try to buck up a bunch of people who don’t deserve it, to try to carry the water and make excuses for people who don’t deserve it. I just – I did not want to sit here and participate, willingly, in the victory of the libs, in the victory of the Democrat Party by sabotaging my own. But now with what has happened yesterday and today, it is an entirely liberating thing.”

What a relief it must be for him to no longer have to pretend to back posers he doesn’t really support, just because he feels he needs to prop up the GOP, despite the fact that he doesn’t think they deserve it. In this statement he makes it clear that he would never allow himself to be that cynical and dishonest with his audience ever again.

Except for one thing. He made that statement following the election in 2006 when the Democrats swept the GOP out of power in the congress. Apparently his commitment to never carrying water for those who don’t deserve it was short lived. His obsession with bashing Democrats, even if he has to lie to his audience about Republicans, takes precedence over what he once called his liberation. That demonstrates the shallowness of Limbaugh’s character, and it is yet another reason that nobody should listen to him.

2 thoughts on “Rush Limbaugh: So Wrong”