As further evidence of the tunnel-vision conservatism of Fox News, the Nielsen ratings for election night show just how intolerant their audience is of any information that is undesirable or contrary to their worldview.

As the broader television audience peaked into the evening, those watching CNN and MSNBC remained attentive to breaking news and analysis throughout the night. However, those watching Fox News switched off their media feeding tube shortly after the network declared that President Obama had been reelected. 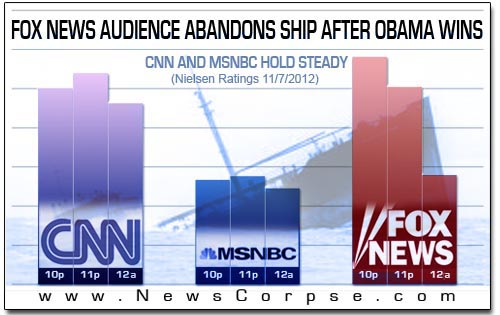 This chart reveals the precipitous relative decline in viewers that occurred only on Fox News. Some folks may speculate that Fox’s audience simply got tired and went to bed because the network skews older than the other channels and the geezers were sleepy. However, the percent decline for the total audience and the younger 25-54 year old demographic were nearly identical. Others may simply conclude that Fox’s conservative viewers just weren’t interested in anything they might have learned after the race was called. But that’s precisely the point.

Rather than be subjected to news that they found discomforting, the Fox audience turned away, even from their own partisan choice for what they think is news. The reelection of the President must have come as a something of a shock to Fox viewers because Fox had been relentlessly positive about Mitt Romney’s inevitable success, while portraying Obama as a failure who was destined to be rejected for a second term by a populace who despised him. Fox disparaged any polling that showed Obama ahead as biased and unreliable – even their own.

By shutting off Fox News early, they missed the spectacle of Fox contributor Karl Rove challenging the election analysis of his colleagues at the network. He insisted that the call on Ohio was premature and that he thought Romney would take the state. This resulted in anchor Megyn Kelly marching down to the newsroom to seek affirmations from the analysis staff of their projections. As it turned out, Rove was wrong, along with most of the partisan pundits that litter the Fox schedule.

The sharp drop-off in viewership that occurred only on Fox reveals the sensitivity that the Fox viewer has to actual, truthful information. That is something that Fox exploits eagerly as they load up their programming with false and prejudicial stories. And that accounts for why Fox viewers have been shown to be so much less informed than consumers of news from other sources. They have such an aversion to anything other than Fox’s pre-seasoned, right-wing brand of pseudo-knowledge that they won’t even stayed tuned to Fox if there is a chance they might be exposed to raw reality.