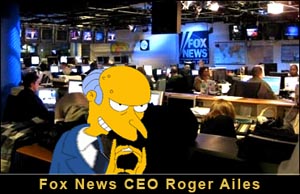 Fox News CEO Roger Ailes is revealing the creeping dread he harbors at the prospect of being exposed in a new biography that will be released in a few weeks. As a result of his manic paranoia he has assembled his Flunky Brigade to mount a large-scale offensive meant to preemptively discredit the forthcoming book and its author, Gabriel Sherman.

Dylan Byers at Politico wrote about this blitzkrieg earlier this month in an article that detailed how Sherman has already been targeted by Ailes’ defenders on the Fox News payroll. They have assailed him as a “phony journalist,” a “stalker,” a “harasser,” and when all else fails, as “a [George] Soros puppet.” This is the same battle plan that Ailes executed when he was faced with the release of a damning portrait of Fox News by Media Matters founder David Brock. Ailes dispatched his defenders to slanderously malign Brock as a mentally unstable, drug abusing, megalomaniac. It’s the Ailes way.

Now another Ailes puppet, Pat Caddell, has been recruited into the fray with an utterly daft hit piece in the form of an editorial on FoxNews.com. Caddell begins his protracted rant as a self-glorifying account of how he was the genius behind a thirty year old, moth-eaten speech by Jimmy Carter. But that was just the set up on a labyrinthine journey to disparage Sherman’s pending biography of Ailes, about which Caddell said with more than hint of hyperbole, “the mere publication of his book will go beyond controversy. Its publication would, in and of itself, be a scandal.” However, nothing in Caddell’s feverish disgorging ever explained what would be so scandalous about it. The entire article reads like a reject from the notoriously disreputable Fox Nation, but even that Fox annex wouldn’t re-post this tripe.

Try to follow along as Caddell weaves a nearly incoherent tale of intrigue. The pretext for his ire was an alleged claim of credit for the Carter speech by Gordon Stewart, who just happened to be one of Carter’s speechwriters. Caddel insists, however, that Stewart had little to do with the speech, but Caddell kept that opinion to himself for several years. His impetus for speaking out years later was a rather childish response to an unrelated article by Stewart wherein he negatively reviewed a friendly biography of Ailes that was written by Ailes’ personally selected lackey Zev Chafets for the purpose of beating Sherman’s book to market. Caddell wrote “When I saw that Stewart had trashed author Chafets for picayune inaccuracies in his Ailes book, I said to myself, ‘Enough is enough. If Stewart is going to dump on Chafets for tiny mistakes, then I should let everyone know that Stewart has been telling a whopper for years.'”

In other words. because Caddell didn’t like Stewart’s review of the sycophantic bio that Ailes himself had solicited, Caddell would dredge up an old, unrelated dispute to lash out at Stewart. At this point you may wonder what any of this has to do with Gabriel Sherman. Well, Caddell drags him into this with this introduction: “There’s a person named Gabriel Sherman, a writer for New York magazine and a fellow at the New America Foundation–a left-of-center think-tank to which George Soros and others in the Soros family have contributed.” The Soros affiliation was thrown in because Caddell knows that the Fox audience has a knee jerk gag response to the name. What Caddell fails to note is that his Fox colleague, conservative pundit Jim Pinkerton, was also a New America Foundation fellow.

Are you still following? Caddell’s problem with Sherman is that while conducting research on Caddell’s article attacking Stewart, Sherman asked Caddell to document his assertion that Stewart had improperly claimed credit for the Carter speech. Caddell had written that “Four years ago, in both print and in interviews, Stewart claimed to be the author of the “crisis of confidence” speech.” Sherman then had the audacity to ask Caddell to direct him to the articles and/or interviews that Caddell had referenced. This resulted in Caddell having a conniption fit and declaring that Sherman “can’t or won’t find something that is plainly a part of the public record, and then he writes me a faux-friendly e-mail asking me to help him.”

That’s a bit of an over-reaction, it would seem. The first thing an experienced journalist would do to verify a quote would be to ask the person quoted for his sources. Why spend untold hours digging up years-old documents if the person who cited them could simply send you a link? But Caddell thinks that was an outrageous request and indicative of poor research skills. On the basis of that, Caddell extrapolates that Sherman is incompetent and his book on Ailes, which Caddell has never seen, will be a hack job.

That’s a fairly thin basis for criticism. But if you think that’s bad, have look at the tantrum Caddell throws in his final paragraph:

“Frankly, Mr. Sherman, you are an embarrassment to the journalistic trade, and if your book is in the same vein, it will be an embarrassment to your publisher and a disservice to the reading public. Please take my advice: Grow up, get a life, and most of all, leave me alone. Got that?”

Seriously? Was Caddell’s emotional maturity stunted at the junior high level? That’s the most pathetically impotent threat I’ve ever seen in print. And the entire tirade was just an excuse to bash a book that he knows nothing about because the author asked him a simple and reasonable question. The lengths to which Caddell has gone, at the behest of his Fox master Roger Ailes, demonstrates just how worried they are about the revelations that Sherman’s book may contain. And it reveals them to be so desperate that they would resort to these ineffectual bullying tactics.

The question is, are they also so delusional that they believe that any of this will have anything other than a positive effect on Sherman and the reception for his book? If anything, it will increase anticipation all the more, which would be ironic because the Chafets book on Ailes was a thundering dud, that sold less than 3,000 copies its first week. That prompted Chafets to tell The New Republic that “Most people don’t care about Roger Ailes.” That’s a curious remark for an author to make about the subject of his latest book.

In the end, Ailes, Caddell, and Chafets may be adding to their own gnawing sense of envy by giving Sherman’s book a big PR boost that could help sales. Perhaps Sherman should send them a thank you note. Well, except for Caddell who wants to be left alone.