For the first time in 600 years there is a living former Pope. However, Pope Emeritus Benedict does not plan to retire quietly to the Vatican’s back porch and tend to gardening and meditation. He has other plans and they are leaking out along with a wisp of white smoke from the chimney atop 1211 Avenue of the Americas.

Fox News insiders report that a deal has been reached to bring Benedict to the Fox News family with a new program to air on Sunday mornings. Tentatively titled “Pope Culture,” sources say that it will premiere this fall and is slated to be a forum for many of the values issues that dominate the dialogue in the media and at dinner tables across America. 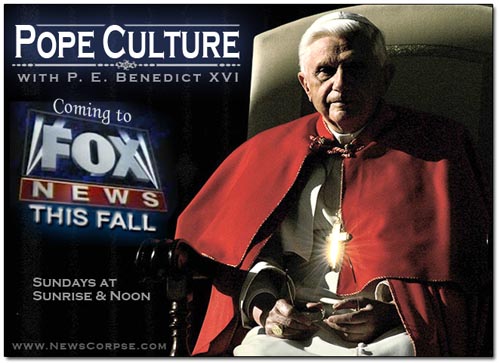 Discussions to draft the papal free agent began shortly after the selection of Pope Francis, Benedict’s successor. Those meetings were helped along by some influential Vatican insiders with media connections. Greg Burke, the current Senior Communications Adviser in the Vatican’s Secretariat of State, was previously the Fox News correspondent covering the Vatican, a position he held for ten years. Burke, a member of the ultra-conservative Catholic prelate Opus Dei, left Fox in the summer of 2012 to head up the Vatican’s PR efforts to quell the uproar over a series of embarrassing scandals.

Burke was instrumental in introducing Benedict to Fox CEO Roger Ailes who was immediately intrigued by the prospect of signing a popular figure in the world of religion with international name recognition. Ailes was said to be looking for a new hot property to bolster a stale line-up that was recently roiled by controversy and incompetence. This year he had to jettison or bench familiar Fox faces like Sarah Palin, Karl Rove, and Dick Morris, due to their humiliating failures as commentators and analysts. Since God has anointed Benedict as infallible, Ailes can relax and won’t have to worry about the sort of mistakes that caused his network to suffer historic declines in ratings and credibility.

Sources inside Fox, who requested anonymity because they were not authorized to speak about the matter, said that contract negotiations included some unique concessions. The show would not be modeled after the other Sunday news programs that feature sometimes raucous debates. Benedict insisted that his program be a more deliberative hour interspersed with inspirational segments and profiles of charitable organizations and volunteer opportunities. The theme of promoting “service” was said to have been brought up repeatedly by Benedict’s representatives. They briefly encountered some resistance at Fox by hardliners who regard such talk as coddling freeloaders who refuse to accept personal responsibility. In the end, Benedict prevailed by agreeing that the type of service that he advocated was of the private variety and not that provided by bloated government agencies. That was enough to win over the Fox holdouts.

Benedict further requested and received assurances that he would have editorial control and would not be subject to either fairness or balance with regard to his topics or guests, a demand Ailes had no problem with since he never took that seriously anyway. There is also a provision for Fox to build a TV studio at Benedict’s residence which, sources say, will be accomplished on the cheap by repossessing the one they built for Sarah Palin at her home in Wasilla, Alaska. As of this writing there is no confirmation of rumors regarding the brown M&Ms.

When Benedict arrives at Fox in the fall he will be joining a roster already heavily weighted with Roman-Catholics, including: Bill O’Reilly, Sean Hannity, Megyn Kelly, Bret Baier, Bill Hemmer, Brian Kilmeade, Andrew Napolitano, Jeanine Pirro, Laura Ingraham, Dennis Kucinich, and the in-house priest, Father Jonathan Morris. Rupert Murdoch, the CEO of Fox News parent News Corp was himself inducted into the “Knights of the Order of Saint Gregory the Great” by Pope John Paul II.

So Benedict ought to feel right at home in the midst of a College of (Media) Cardinals. His prior experience as spokesman for a vast assembly of true believers is the ideal preparation for a career as a Fox minister. Fox viewers exhibit a fierce loyalty that is consistent with the behavior of religious devotees and cults. They voluntarily separate themselves from the heresy of other news sources that might infect their pious souls. They make a point of disassociating with apostates and blasphemers who might divert them from the true path. Cult leaders demand strict obedience, and that is precisely what Fox News gets from their disciples. They even have an adjunct site, Fox Nation [see Fox Nation vs. Reality], that implores its adherents to “Join Us” with the promise that they will never be alone – a promise that is familiar to churchgoers.

The pairing of Fox and Benedict appears to be almost preordained. They have striking similarities in their principles and agendas. And at the root of their shared mission is the fact that they are both trying to sell stories on faith to ill-informed people who are motivated by fear. This relationship has the potential to be beneficial for everyone involved and is being greeted with unanimous approval from the Fox hierarchy. Oh Happy Day.