Remember the other day when a terrorist plot was uncovered in Minnesota and the white Christian suspect was apprehended? And remember how subsequent to the arrest Fox News aired wall-to-wall reports about how white Christians ought to be surveilled in their communities and churches; how they should be denied visas; how they should be profiled by law enforcement; and how their ties to right-wing extremists should be investigated? 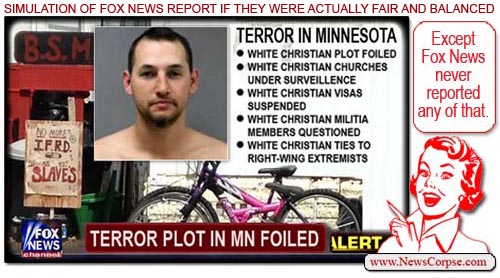 Yeah, neither do I. The truth is that Fox has given this story about Buford Rogers little attention. And worse, they have almost completely ignored the fact that this alleged terrorist is a white member of right-wing militia groups. Fox has even avoided using a picture of Rogers, which would have made his ethnicity apparent. And over at the Fox Nation Lie Factory there was a single posting, with no photo, that was linked to a right-wing blog rather than a news source.

Given how Fox News is so notoriously sensationalistic and inclined toward hyper-melodramatic presentations of crime and terror-related news items, it might seem curious that they have sought to downplay this story. However, if you know Fox, it would not be surprising that their editors would suppress this item. It does not further their agenda to stigmatize Muslims and other “foreign” types as the primary instigators of terrorism.

None of Fox’s primetime programs even mentioned this arrest. And don’t hold your breath waiting for Fox to report that a majority of domestic terror incidents since 1995 were committed by right-wing extremists. The “fair and balanced” network is only interested in demonizing dark-skinned infidels, not wholesome, white, Jesus-loving, patriots.