Donald Trump has been stuck in a frantic and tedious loop of whiny denials for the past couple years. It consists primarily of him impotently proclaiming his innocence with regard to his nefarious associations with Russian operatives in an effort to steal the 2016 presidential election. For the most part his factless proclamations have only served to make him look more guilty. 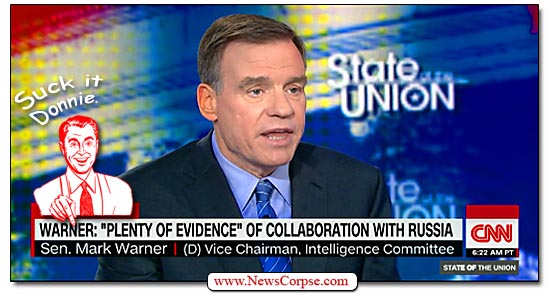 Among his most persistent citations of innocence has been a repeated reference to remarks by the Republican chair of the Senate Intelligence Committee, Richard Burr. Last September Burr told reporters that he had not seen any direct evidence of collusion or conspiracy with Russia on the part of the President. Note that he did not say it didn’t happen, only that his committee had “no hard evidence” of it. But that was enough to trigger Trump into making multiple identical tweets on the subject. It began on Sep 12, 2018, and continued on Feb 7, 2019, and Feb 8, 2019 and Feb 9, 2019 and Feb 10, 2019 and Feb 22, 2019 and Feb 25, 2019.

Some of these tweets were Trump unleashing his standard “Witch Hunt” rants, and others were retweets from the likes of Sean Hannity. But they all said exactly the same thing incorrectly quoting Sen. Burr: “No Collusion!”

Well, on Sunday morning Trump’s favorite proof that he was a squeaky clean paragon of virtue fell apart. Sen. Mark Warner, the Vice-Chair of the Intelligence Committee appeared on CNN’s State of the Union and explicitly contradicted Trump’s distorted version of events (video below). His remarks could not have been more clear:

Warner outlined a small portion of the evidence that was just revealed during the recent House Oversight Committee’s hearing with Trump’s former lawyer, Michael Cohen. He cited three pieces of evidence from Cohen’s testimony:

“One, the fact that Donald Trump and Michael Cohen mislead the American public for months about the whole notion of trying to continue to get a Trump Tower project going in Moscow. […]

“The second is the evidence that Mr. Cohen put out that he was in the presence of Donald Trump when Roger Stone called indicating that he had just gotten off the phone with Julian Assange from Wikileaks, indicating that Wikileaks was about to drop a bunch of very damaging information about Hillary Clinton. […]

“And finally we have this whole question wherein Mr. Trump knew about the meeting in Trump Tower that included Don Jr, Jared Kushner, the campaign manager, Paul Manafort. Clearly a meeting that was not about Russian adoption, but was about the idea of turning over dirt on Hillary Clinton.”

For good measure, Warner’s counterpart in the House Intelligence Committee, Rep. Adam Schiff, spoke on the same issues on CBS’s Face the Nation, saying that “there is both ‘direct evidence’ and ‘abundant circumstantial evidence’ of collusion with Russia.” He elaborated:

“They offer that dirt. There is an acceptance of that offer in writing from the president’s son, Don Jr., and there is overt acts in furtherance of that. That is the meeting at Trump Tower and all the lies to cover up that meeting at the Trump Tower, and apparently lies that the president participated in.”

So this should put an end to the fallacy that there is no evidence against Trump for conspiracy with Russia. Quite the opposite is true. There are mountains of evidence. And that’s even the position of the Vice-Chair of the Senate committee that Trump is so fond of citing on his own behalf. But don’t expect this to end Trump’s plaintive wailing that he’s innocent. When has reality ever interfered with his determination to disgorge obvious lies to shield himself from the consequences of his criminal behavior?