Breitbart News has an arduous task as it seeks to produce a daily menu of moronic musings to satisfy their dimwitted readers. It seems a near impossible mission to continually churn out the quantity and quality of idiocy that they somehow manage to maintain. Here are a few recent examples of the prime cuts of cretinism that have graced their puerile pages. 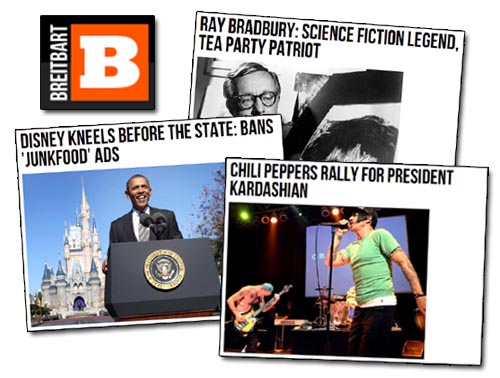 Ray Bradbury: Science Fiction Legend; Tea Party Patriot
The news that Ray Bradbury, author of classic books such as Fahrenheit 451 and The Illustrated Man, passed away Wednesday surely stirred pangs of grief and memories of inspiration for millions. But for the Breitbrats it was a morbid opportunity to polish their egos by sponging off of the reputation of a beloved storyteller. These parasites can’t even set aside a time to mourn without attempting to turn the occasion into a partisan political affair. At 91, Bradbury had a long life and expressed a wide variety of views. In his later years he did tend to lean to the right, but he never associated himself with the Tea Party. For the Breitbrats to assert that after his death is not unlike the disturbing Mormon practice of Baptizing Jews posthumously.

Disney Kneels Before The State: Bans ‘Junkfood’ Ads
To today’s conservatives, the worst thing that any business can do in the age of Obama is to align itself with any initiative whose purpose is the well-being of society and it’s inhabitants. That’s the cliff Disney stepped off of when, in partnership with First Lady Michelle Obama’s campaign for children’s health, they unveiled plans to keep junk food ads off of their child-focused TV networks, radio stations and Web sites. To the Breitbrats, when a business chooses to refrain from indoctrinating kids with unhealthy messages, it is not the free market at work, but a capitulation to a tyrannical government. Breitbrat John Nolte begins his advocacy of Big Mac brainwashing by denying the existence of the very real problem of child obesity. But then he launches into a surprising justification:

“The left’s rebuttal is always the same: Well, we have to pay the health care costs for the obese.

Yes, we do, but the cost of liberty is not always fair — but it’s worth every damn penny.”

Get it? Nolte favors passing on the costs of treating illnesses resulting from obesity and malnutrition to society-at-large. Sounds like universal healthcare (aka socialism) to me. He thinks it’s perfectly OK for all of us to pay for the consequences of behavior that will drain the nation’s treasury if that behavior was freely chosen by the patient. And he shudders at the thought of people being informed about their health choices, even if the person is only ten years old. At the same time, he opposes paying for medical care for those unfortunates who might randomly develop kidney disease or multiple sclerosis or any number of other illnesses that are not behavior driven. That’s because he values liberty so highly that even socialism is justified to preserve our right to totally screw ourselves up.

Chili Peppers Rally For President Kardashian
The Breitbrats like to see themselves as trendy fashionistas who are hip to the scene, man. That’s likely an emotional reaction to their having been such pathetic outcasts in their youth. So now, in adulthood, they strive pitifully to fit in with what they think is cool. The result is an attempt to ridicule President Obama by arbitrarily associating him with a Kardashian. And as if that weren’t lame enough, they go on to insult the Red Hot Chili Peppers who provided free entertainment to thank Obama campaign volunteers for their service.

Breitbrat Christian Toto derides the Red Hot Chili Peppers as “aging punksters.” OK, the Red Hots aren’t 20-somethings, but my guess is that Flea would kick Toto’s tail in a contest to see who rocks harder. What’s more, when the most prominent rocker in the Romney is camp is Ted Nugent, a senior citizen has-been with a gun fetish, you might want to lay off the age jokes. Nugent spends his weekends at state fairs on nostalgic reunion tours, while the Red Hots fill stadiums and still chart hits. This one is currently at #17:

In these few items the Breitbrats have thoroughly demonstrated that they are shameless partisan hacks, incoherent hypocrites, and wretchedly feeble culture critics. No wonder their model of obsession-fueled, juvenile journalism (i.e. “vetting” the President) is such a sorry failure. Somehow they have managed to make Andrew Breitbart’s laughably weak and transparently biased blog conglomerate even dumber and less consequential.