At yesterday’s White House press briefing, Major Garrett of Fox News embarrassed himself by demonstrating his utter lack of understanding of the Internet and email. Today he is escalating his campaign to make a total ass of himself, and he is doing a magnificent job of it.

Garrett appeared on Fox News today to announce that he is pursuing White House press secretary Robert Gibbs to find out how emails, allegedly sent from the White House, were received by people who never requested them. He has even filed a Freedom of Information Act request to get to the bottom of this raging controversy. There are some rather simple and entirely innocent answers to this mystery, but Garrett can’t be bothered to investigate them. On his blog today he admitted to journalistic negligence that would make a cub reporter cringe.

“Fox cannot independently verify all of these accounts. Fox can only represent what hundreds of e-mailers have represented to me or to the network.”

So Garrett is relying on the accounts of the people who contacted him who said they were “positive” the emails came directly from the White House, but he can’t verify a single one. He is satisfied that these people whom he has never met, never questioned, never vetted, are so reliable that he is under no obligation to confirm their assertions. He produces two examples of aggrieved email recipients, one of whom complains, not of an email, but a pop-up ad containing an email from the White House. Of course, a pop-up ad cannot contain an email. It can contain ad, but Garrett didn’t verify this either and, frankly, I’m skeptical. 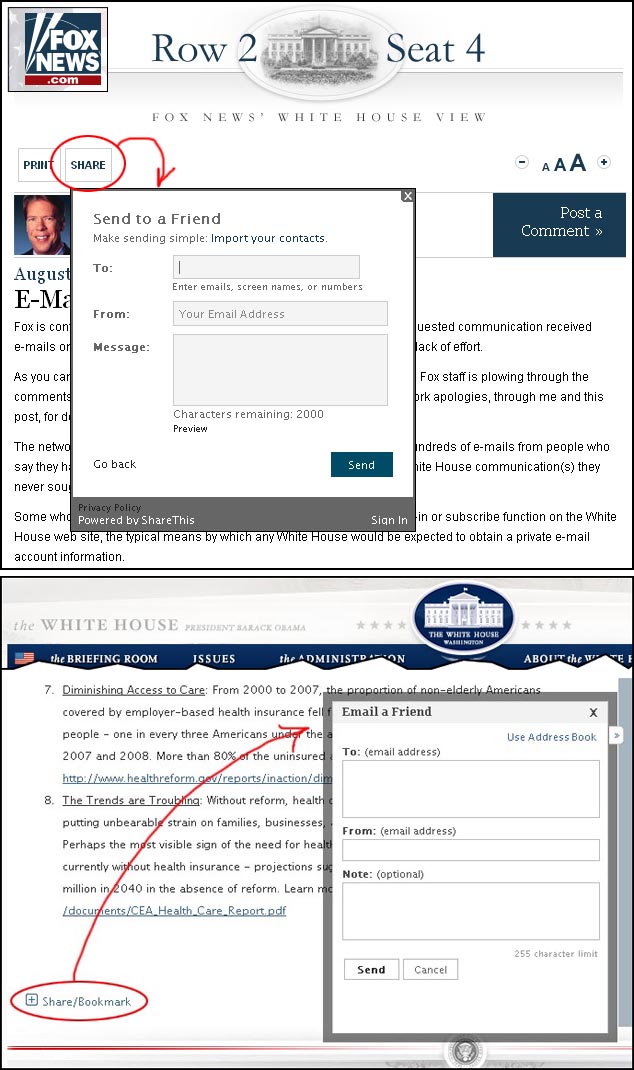 These are the people on whose “positive” assertions he was relying when filing his FOIA request. But Garrett is missing an even bigger piece of this puzzle. Apparently he never bothered to look at his very own Fox News blog on which there is a “SHARE” feature that permits anyone to send an email from that site to any other email address. And – surprise – WhiteHouse.gov has the very same feature. (see image at left)

I don’t know if Garrett is really this clueless about the Internet or if he is deliberately manufacturing a remarkably lame scandal. But before he gets himself in too deep, he may want to get former Alaska Sen. Ted Stevens to explain this series of tubes to him.

For a network/party that had no problem with the Bush administration actually monitoring and reading their emails, they are sure making a big stink out of something as innocent as a contact list from which they can unsubscribe with a click.

Update: I’m curious if Garrett’s FOIA request would violate the privacy policy of the White House web site. I know that I wouldn’t want my email, or other info that I gave to WhiteHouse.gov, turned over to Fox News.

Update II: Fox News received a response from the White House regarding the mysterious emails:

“The White House email list is made up of email addresses obtained solely through the White House website. The White House doesn’t purchase, upload or merge from any other list, again, all emails come from the White House website as we have no interest in emailing anyone who does not want to receive an email. If an individual received the email because someone else or a group signed them up or forwarded the email, we hope they were not too inconvenienced. Further, we suggest that they unsubscribe from the list by clicking the link at the bottom of the email or tell whomever forwarded it to them not to forward such information anymore. We are implementing measures to make subscribing to emails clearer, including preventing advocacy organizations from signing people up to our lists without their permission when they deliver petition signatures and other messages on individual’s behalf.”

As it turns out, it was third-party organizations who entered the email addresses into the White House system, not some grand conspiracy by Obama and ACORN and Bill Ayres and the Kenyan Consulate. Who knew? Well, everyone but Major Garrett and the fraternity of Foxpods.