It’s amazing how Donald Trump can do so many shockingly idiotic things, but he still manages to shock with his next bit of idiocy. When will it end? 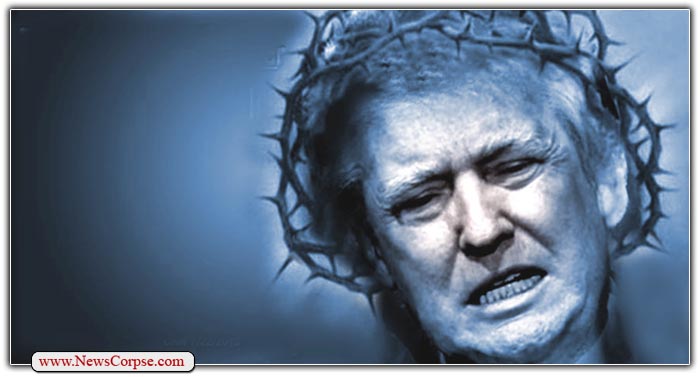 On Independence Day, Trump tweeted a video (see below) of a massive church choir singing a new hymn based on his campaign slogan “Make America Great Again.” The audacity of this narcissistic jackass exalting himself on a day meant to celebrate the freedom and liberty of the nation is beyond belief. He really thinks he is the manifestation of god on Earth, and his whack-job followers agree.

The orchestra and choir performing the hymn is from the Texas megachurch, First Baptist Dallas. It’s pastor, Robert Jeffress, is an evangelical leader and an early supporter of Trump. However, other Christian leaders have criticized the new hymn. Jonathan Aigner, Director of Music Ministries in a PCUSA congregation, said that:

“Pledging allegiance to God and to America in the same breath, melding together the kingdom of God and self, they pray a blasphemous prayer to a red, white, and blue Jesus.”

It’s fairly obvious that raising Trump to the level of a messiah would be considered sacrilegious to most pious Christians. Since I’m not one, I really don’t care. But by making this his Fourth of July tweet, Trump is venerating himself at the expense the country. He is placing his own glory above that of America’s founders, heroes, and citizens, who truly make this country great. How can he be so egotistical and tone-deaf? And how can his followers not be offended?

It’s the Fourth of July and millions of Americans will be celebrating by barbecuing burgers and knocking back brews. It’s the American way. Too few of them will actually be paying tribute to the principles represented by this national anniversary. That’s OK. The country needs time to kick back and enjoy a summer day with family and friends. 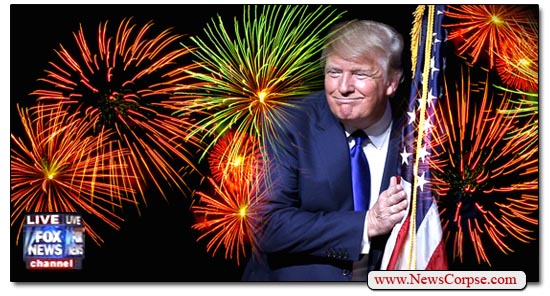 What is not OK is the state of one of the nation’s most prominent political parties. Led by the current resident of the White House, Donald Trump, the Republican Party is deeply troubled. It is exhibiting signs of having abandoned the fundamental canons of liberty. And the voters identifying with it seem to have sold their souls to defend indefensibly un-American behaviors.

Trump’s animosity toward the free press is just one example of a deteriorating brand of patriotism. Add to that his aversion to any form of dissent. He regards all criticism as the conspiratorial plots of political foes and fake news. And efforts by Republicans to make it more difficult for citizens to vote recalls a dark time in America’s past.

These disturbing trends advanced by Trump’s GOP are sadly reflected in the rank and file of the party. A new Marist poll conducted for NPR and the PBS NewsHour tells the story. It reveals just how much of America’s liberties Republicans are willing to surrender to blind partisanship. Much of the poll was devoted to the decline of civility in political discourse, and that’s bad enough by itself. The poll found that “Seven in 10 Americans say the level of civility in Washington has gotten worse since President Trump was elected.” That is surely influenced by the flagrantly uncivil and decidedly unpresidential demeanor of Trump.

However, the poll also addressed some attitudes that are integral to the American experience we honor today. And the results are cause for concern. For instance, forty-two percent of Republicans think that freedom of the press has been expanded too much. That’s the freedom that’s established in the very first amendment to the Constitution which says that it shall not be abridged. And a huge chunk of Republicans think there’s too much of it.

And that’s not all. Forty-one percent of Republicans think the right to protest or criticize the government has been expanded too much. That’s also protected by the First Amendment as the “redress of grievances.” A smaller, but still significant, segment of the GOP (25%) thinks that the right to vote has been expanded too much. Because why would anyone want to protect the essential activity that allows citizens to participate in a democracy?

Fox News featured a part of this poll that asked respondents about the people and institutions they trust. On Fox and Friends they displayed a graphic showing that Trump is trusted by thirty-seven percent, but the media is only trusted by thirty percent. They portrayed this a win for Trump despite the fact that it means sixty-one percent don’t trust the President. That’s a substantial majority and is usually not a number to be proud of. 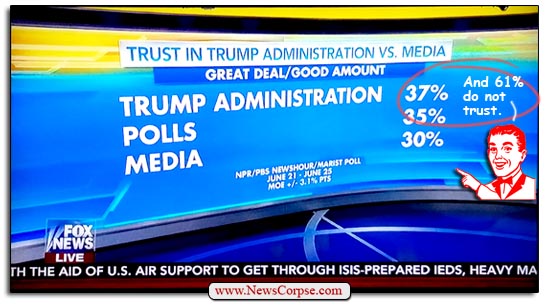 What’s more, the “Trump vs. the media” comparison by Fox News is deliberately misleading. The sixty-one percent who don’t trust Trump represents the total number of people holding that view. But the sixty-eight percent who don’t trust the media includes eighty-one percent of Republicans who think it’s too liberal, plus forty-two percent of Democrats who think it’s too conservative. There’s a bipartisan lack of trust for opposite reasons. So, contrary to Fox’s dishonest spin, it isn’t a referendum on the so-called anti-Trump fake news. When a poll actually did compare Trump to the media, the media won by a landslide.

It’s unfortunate that so many Americans will be spending this day celebrating their own prejudices. They don’t understand the Constitution or what American freedom entails. They embrace Trump’s hostile rhetoric and his agenda of division. It’s the antithesis of liberty. But the good news is that this country was founded on ideals that can withstand the animus and ambition of wannabe dictators. We just have to be vigilant and willing to defend those ideals. So Happy Independence Day, America. Let’s keep it that way.