It must be awfully hard to be a Fox News shill these days. The still flowing flood of incriminating evidence against Donald Trump and his sleazy family is nearly impossible to justify. The contortions that Fox News hosts and pundits have to employ seem painful in the extreme. Some of them aren’t even trying anymore. 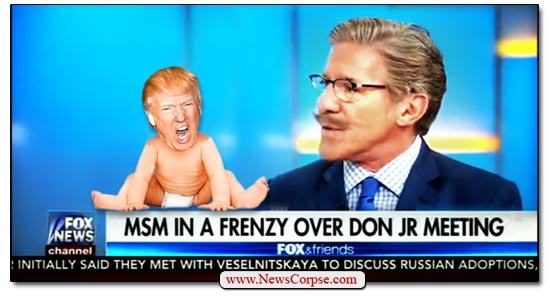 That, however, is not the case with the crew at Fox and Friends, and their Saturday morning guest, Geraldo Rivera (video below). In a discussion about Don Trump, Jr.’s meeting with Russian operatives, the “Curvy Couch” potatoes crawled all over themselves trying to defend the indefensible. Eventually they wound up where they often do – blaming the media.

For his part, Geraldo Rivera set up his remarks by reminding everyone that the Trumps were close, personal friends. He restated his “tremendous respect and admiration” for them. Then he gently chided them for what he characterized as minor goofs. Rivera described the meetings with Russian government operatives promising dirt on Hillary Clinton as “understandable,” but “not criminal.” Legal experts disagree. He did manage some criticism of Don, Jr. for his “dissembling” otherwise known as lying.

And then Rivera went flying headfirst off the tracks. Co-host Abby Huntsman asked a typically asinine question. She wondered whether the media was to blame for the troubles Don, Jr. was undergoing. Because of course it was the media’s fault that Donnie met with unsavory Russians and then lied about it repeatedly. But Rivera’s historical analog to this affair was the presidency of Richard Nixon. His take on it was pure lunacy:

“During the years of Tricky Dick Nixon, 1972 and 1973 principally. If there had been a Fox News then, if there had been a Sean Hannity then, I do not believe President Nixon would ever have been forced to resign. Why do I say that? Because when you see how his story evolves, and he has no one to defend him, how everybody’s deserted him, no on got the other side of the story. So that rinky-dink burglary then metastasized into the cover up, which led to the tumult, the nuclear explosions in the administration, and finally the resignation of the President.”

So Rivera blames the downfall of Nixon on the absence of defenders in the media. Not on the fact that he presided over an illegal break-in of the Democratic campaign office. Not on the threats and bribes and lies that marked the cover up. Rivera thinks there was another side to the story of Nixon’s corruption that wasn’t being told. You know, the good side of the corruption.

But the best part of this cognitive meltdown is Rivera’s accidental admission that Fox News is nothing more than an alibi generator for crooked Republicans. He’s saying that despite the obvious crimes, Nixon might have survived if he had Fox News to lie for him. Nixon’s problem wasn’t that he broke the law, violated his oath of office, and had no discernible ethics. It was that he didn’t have someone like Sean Hannity to fabricate excuses and point fingers at innocent bystanders.

By extension, that’s the role that Rivera is admitting that Fox News plays now. They are deliberately denying reality and replacing it with manufactured falsehoods. They are covering for Trump and serving up other sides to the story of his corruption. And they are accusing others (Obama, Clinton, etc.) of crimes without any evidence whatsoever. It’s a strategy of deceive and deflect. And, as with Nixon, despite the obvious crimes, the goal is for Trump et al to skate free. Of course, many observers have already known this about Fox News for years. But it is helpful when one of their top correspondents is dumb enough it out loud on the air.

The saga of Donald Trump, Jr. continues to unfold with more damning evidence surfacing everyday. The meeting that he attended last June was originally said to be about Russian adoption. Then they expanded it to say it might have covered opposition research on Hillary Clinton. Then emails were released showing that the meeting was solicited wholly as a campaign dirt exchange and that the Russian government was involved. Most recently it turns out that an alleged Russian spy was in attendance as well. 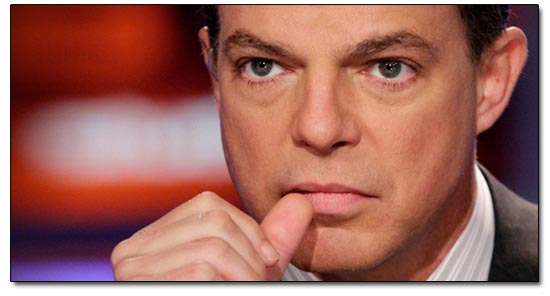 This web of deliberate deceit has left mouths agape on both sides of the political aisle. Staunch conservatives like Charles Krauthammer and Ralph Peters have blasted the Trump family’s brazen dishonesty and feeble cover ups. This outrage has even extended to Fox News anchors who are no longer capable of masking their astonished disbelief. An example of this occurred Friday in the following exchange between Shepard Smith and Chris Wallace (video below):

Wallace: “We’ve been told a variety of stories, and who knows if we’ve gotten to the end of the story?

Smith: “We’re still not clean on this, Chris. If there’s nothing there – and that’s what they tell us, they tell us there’s nothing to this and nothing came of it. There’s a nothing burger. It wasn’t even memorable, didn’t write it down. Didn’t tell you about it, because it wasn’t anything so I didn’t even remember it. With a Russian interpreter in the room at Trump Tower? If all of that, why all these lies? Why is it lie after lie after lie? […] The deception, Chris, is mind-boggling. And there are still people who are out there who believe we’re are making it up. And one day they’re gonna realize we’re not and look around and go, ‘Where are we, and why are we getting told all these lies?'”

Wallace: “I don’t know what to say. You know, I think there’s a lot of truth to everything that you’ve said.”

Indeed. The look on Wallace’s face, and delayed reaction was telling in itself. That’s pretty much the only response Wallace could have made. The flimsy obfuscation and diversions by Trump and his media shills is painfully obvious. And yet, they continue to pile on the lies even after they are exposed. The complaints from hacks like Kellyanne Conway, Sean Hannity, etc., fail to do anything but shower them all in shame. Nevertheless, Fox News flunkies like Eric Bolling, Jesse Watters, and the Fox and Friends crew are still spinning furiously. But as the truth slowly leaks out they will be left in a pool of embarrassment and disgrace.

Credit must be given to Smith and Wallace who are demonstrating that they aren’t afraid to acknowledge reality on occasion. If this is done more frequently there may be some hope that brainwashed Fox News viewers will see the light. That’s a lot to hope for. But we have to start somewhere.