This Friday has been a day filled with significant news stories that have a profound impact on the nation and the world. For instance, Donald Trump asked his Attorney General, Jeff Sessions, to investigate the New York Times for publishing an op-ed by an anonymous author. Trump’s campaign foreign policy advisor, George Papadopoulos, was sentenced in federal court. Hurricanes are heading toward both Hawaii and the East Coast of the United States. And Russia is threatening an offensive in Syria that could put American soldiers at risk. So what is the top story on the Fox News website this afternoon? 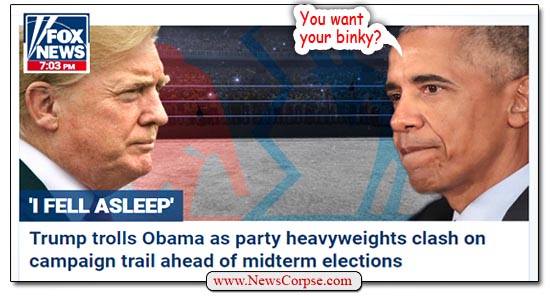 That’s right. Donald Trump trolls former President Barack Obama by saying that “I fell asleep” during the speech Obama gave today at the University of Illinois. That seems like a pretty sorry effort at trolling. After all, Trump is essentially admitting that he’s a tired old coot with weak stamina. In fact, The Fox News lede could just as well have read:

“A doddering old man, with observable physical and mental infirmities, is unable to stay awake in the middle of the day during a noteworthy speech by a former president even though it is partially about him.”

Of course, that would be somewhat unwieldy as a headline, but it’s a more accurate representation of the facts. Why would Trump want to portray himself as having such low energy, a criticism he used to throw at Hillary Clinton and Jeb Bush? What’s more, if Trump had trouble staying awake for this speech, he had better see his doctor immediately. Obama gave an eloquent and rousing address that covered a broad range of important issues facing the country. Here is a just a taste (full video below):

“Over the past few decades, the politics of division and resentment and paranoia has, unfortunately, found a home in the Republican Party. This Congress has championed the unwinding of campaign finance laws to give billionaires outside influence over our politics; systematically attacked voting rights to make it harder for young people and minorities and the poor to vote; handed out tax cuts without regard to deficits; slashed the safety net wherever it could; cast dozens of votes to take away health insurance from ordinary Americans.

They embraced wild conspiracy theories like those surrounding Benghazi; or my birth certificate; rejected science; rejected facts on things like climate change; embraced a rising absolutism on a willingness to default on America’s debt by not paying our bills; to a refusal to even meet, much less consider, a qualified nominee for the Supreme Court because he happened to be nominated by a Democratic president. None of this is conservative … It sure isn’t normal. It’s radical.

And that put Trump to sleep? These weren’t even the parts that spoke directly about him. He probably wouldn’t have appreciated Obama reducing him to a symptom of today’s political divisiveness. Trump wants to always be the center of attention. And Obama directly addressed Trump’s Stalinist tendencies toward the media by saying that “I complained plenty about Fox News, but you never heard me threaten to shut them down, or call them ‘enemies of the people.”

If Donald Trump has trouble maintaining consciousness during a speech like this, imagine how difficult it must be for him to stay awake during national security briefings. And what about legal consultations with his personal attorneys handling Robert Mueller’s investigation into his collusion with Russia and obstruction of justice? And if he’s only kidding around, it’s an idiotic attempt at humor that only reaffirms the perception of him as being confused and oblivious. Which is a perception that has been reaffirmed so often that we can just accept it as fact at this point.

We’re two days into the news cycle on the anonymous op-ed that appeared in the New York Times announcing a “resistance” inside the White House to Trump’s dangerous unfitness for office. If anything, the temperature has increased with more insiders coming forward to warn about Trump’s unbalanced mental state.

Meanwhile, Trump is proving the allegations against him by bellowing at his staff and behaving even more paranoid than usual. He can’t trust anyone around him but his children, and even that might be assuming too much. The effect this has had on him is obvious and profound. He’s tweeted about this, and the related book by Bob Woodward, eighteen times already. He’s clearly obsessed with these credible depictions of his mental infirmities by people who have access to him and reason to know.

So naturally Trump rushed frantically to Fox News in order to get a good tongue bathing in an environment where he would be safe from well deserved criticism. He was interviewed by Fox and Friends co-host Pete Hegseth before the crowd at his Montana cult rally. And the part of exchange that covered the New York Times op-ed pretty much tells you everything you need to know about Trump’s rupturing psychoses. It’s a wholly incoherent rant that he seemed to disgorge in a single, panicky breath. (video below):

Hegseth: Folks here might have seen an anonymous column written in the New York Times. [Audience boos] And I think this audience would say that an attack on you was an attack on the people that voted for you. Are you any closer to knowing who did it and what should be done if you find out who did it?
Trump: Well number one, the Times should have never have done that because really what they’ve done is, virtually, you know it’s treason. You can call it a lot of things, but to think that you have somebody in all of the cabinets – some many people as you know they came forward, they’re writing editorials. They’re all saying you know it’s got to be at a fairly low level. Because so many people today, I was just coming out, and I see all the people that are saying such great things. We have a lot of love in the administration, and the White House is truly as you would say, a well-oiled machine – it is working so well. You know we have – I heard you say yesterday, we have thousands of people that in theory could qualify. So they take one person out of thousands, but what’s unfair – I don’t mind when they write a book and they make lies cause it gets discredited. We just discredited the last one, we discredit all of them because it’s lies. But I’ll tell you, when somebody writes and you can’t discredit because you have no idea who they are – usually you’ll find out, it’s a background that was bad, it may not be a Republican, it may not be a conservative, it may be a deep state person that’s been there a long time. You don’t know where – it’s a very unfair thing. But its very unfair to our country and to the millions of people that voted, really for us. They voted for us.

First of all, go back and read the question. Trump came nowhere near anything that might be considered an answer. What you have there is an insane person insisting that he’s completely sane while proving that he isn’t. Trump began by charging the Times with treason. Obviously, he has no idea what the word means or how to apply it. And this wasn’t a hypothetical comment. On Air Force One this morning Trump said he was asking his Attorney General, Jeff Sessions, to investigate the Times as a “national security” matter. However, he couldn’t explain how a critical op-ed endangered national security. He also said he’s looking into taking some unspecified action against the paper and the author. That would be a flagrant breach of the Constitution’s First Amendment.

Trump went on to extol the “love in the administration,” despite the unprecedented turmoil, resignations and terminations during his first two years in office. His senior staff are reported to have called him “an idiot,” “a moron,” “a liar,” “a baby,” and more demeaning, but accurate epithets. If this is his idea of a “well-oiled machine,” what, in heaven’s name, would a squeaky one look like?

Trump also told Hegseth that “I don’t mind when they write a book” because “we discredit all of them.” Notice that he doesn’t say that he refutes them or offers substantive rebuttals. He astonishingly admits that he goes straight for character assassination. He affirms that by complaining that he can’t discredit the author if he doesn’t know who it is. Of course, he could dispute what was said, but the only thing he’s interested in is attacking the person, not the allegations. That’s because he can’t attack allegations that are demonstrably true.

The more Trump defends himself from charges of mental infirmity, the more he is demonstrating the validity of the charges. And he’s behaving like the cornered animal that lashes out wildly at any perceived threat. That’s the same behavior he’s exhibited with regard to the investigation by special prosecutor Robert Mueller. Trump is clearly afraid and in panic mode. And that is turning his responses to these situations into more evidence against him. So keep ranting, Donnie. You’re signing your own impeachment order.