There are plenty of important domestic and international events unfolding in this mid-October news cycle. There is, of course, the midterm election which is less than three weeks away. There is the murder of Washington Post journalist Jamal Khashoggi, the details of which are still being withheld. The economy and the environment and immigration and healthcare are all vying for space in the media. 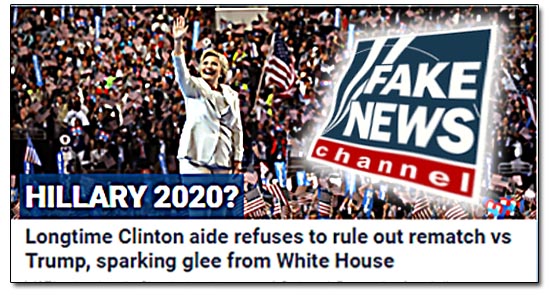 So naturally Fox News has nailed the most significant story that impacts the lives of every American and elevated it to the top of their editorial agenda. Their headline bleats out that “Clinton aide won’t rule out ‘Hillary 2020,’ sparking glee from White House.” That’s right. Fox News managed to scoop the rest of the press with this earth shattering investigative report on the real world of politics in America today. And the profound importance of this journalist coup is revealed in the opening paragraphs:

“A longtime Hillary Clinton adviser is hinting that the former secretary of state may have one more presidential run brewing — a statement greeted with glee from the White House.

“‘It’s somewhere between highly unlikely and zero,’ Philippe Reines told Politico about the possibility that Clinton runs again in 2020, ‘but it’s not zero.'”

Kudos to Fox News for securing an on-the-record statement from a 2016 Clinton staffer who disclosed the shocking news that the chance of Hillary Clinton running for president in 2020 is “somewhere between highly unlikely and zero.” Ironically, those are exactly the same odds of me running for president in 2020. In other words – and in those of Hillary Clinton – she is NOT running. And this is what Fox News saw fit to put at the top of their Internet platform for Trump-fluffing and right-wing propaganda.

The stories immediately following that scoop were not much more newsworthy (see screen-grab here). There was one story about Missouri Sen. Claire McCaskill’s husband that had already been reported nearly two decades ago. Another story was about Trump’s felonious campaign manger, Paul Manafort, arriving in court for sentencing in a wheelchair. That was followed by the breaking news about a CNN reporter who sent a nasty text. And then there was the news of some “mysterious” space debris that landed on a ranch. Stop The Presses!

After all of these vital pieces of information were unveiled, Fox News got around to reporting that a Russian national was just charged with interfering in the upcoming 2018 election. It’s fair to say that this is the only story out of all of these that has any relevance whatsoever. It shows that Russia has not stopped their election tampering, and will likely continue straight on through 2020. And why shouldn’t they when the Trump administration and the Republican controlled Congress have done absolutely nothing to punish them for their past interference or to deter them from doing it more in the future.

Fox News deserves equal blame for whatever damage is done to our democratic processes because of their purposeful dissemination disinformation like this. They deliberately play down Russia’s current criminal activities and worse, they cover them up with puff pieces that are irrelevant or bogus or both. It’s a disgraceful display of subservience to their political masters and it’s the reason that Fox News is so often referred to as State TV.

UPDATE: Now on the Fox News website their top story is “Migrants Defying Trump’s Warning” Like they are bound to obey him? And another story about a lame, right-wing street artist who put up a racist picture of Maxine Waters. Followed by a piece on Eric Trump on Fox News opining about the election. The Russian story is buried even deeper.