It really doesn’t take much to set off the “Curvy Couch” potatoes of Fox and Friends when a Republican candidate is trouble. That’s the current state of the gubernatorial election in Georgia where Democratic candidate Stacey Abrams is in a dead heat with her GOP opponent Brian Kemp. This is a deep red state where Democrats aren’t supposed to win, so Fox News has bolted onto the scene to muck it up. 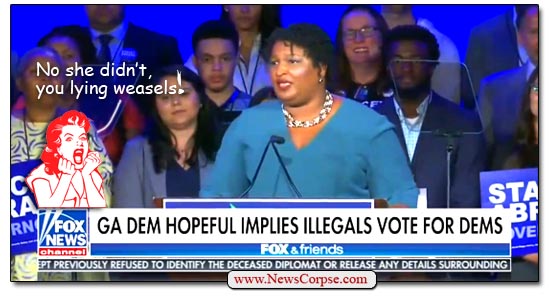 On Sunday morning’s episode of Fox and Friends (video below), the three co-hosts set out to malign Abrams, who would be the first African-American women governor in the U.S. But they had to manufacture a controversy by taking her comments out of context so they could align her with criminal gangs. Co-host Ed Henry began by saying:

“As if on cue, Stacey Abrams, who is the Democratic gubernatorial candidate in Georgia […] sounds like, she thinks at least, that that the Blue Wave is gonna include illegal immigrants voting.”

Then they run a video clip of Abrams saying:

“The thing is that the Blue Wave is African-Americans. It’s white, it’s Latino, it’s Asian-Pacific Islanders. It is made up of those who were told that they are not worthy of being here. It is comprised of those who are documented and undocumented.”

Coming out of the video, Henry says that “If you’re undocumented you’re not supposed to be able to vote.” Whereupon his co-host Pete Hegseth asks:

“What should we label it? Is it an illegal Blue Wave? An alien Blue Wave? If you’ve got criminal gangs coming across, is it an MS-13 Blue Wave?”

Really? First of all, it needs to noted that Abrams was not talking about voters. And nowhere in the clip that Fox played did she say that. She was talking about all of the people who can contribute to an awakening of progressive change in the country. That includes many people who don’t vote but care about the direction this nation takes. It includes students who are not yet eighteen, like the survivors of the Parkland massacre. It includes Dreamers who fulfill every criteria of citizenship except for the technicality that they are undocumented. And it includes the tens of thousands of citizens in Georgia that are being unlawfully removed from the voter rolls by a corrupt Republican secretary of state who happens to be Brian Kemp, Abrams’ opponent.

However, for Fox News to go so low as to associate Abrams with the MS-13 gang is way beyond the pale. As an aside, the MS-13 gang did not come across the border. It’s a home grown gang from southern California. Nevertheless, this proves that Fox News has a complete lack of integrity, honesty, and ethics. And it proves their intention to advance a racist theme that African-American candidates must be connected to criminal elements simply because of the color of their skin. It’s a theme that Fox’s audience will readily accept due to the priming they’ve had from years of watching Fox.

There is going to be a Blue Wave in November, and Fox News is going to have to live with it. Of course, they will lie their butts off and spread bigoted propaganda like they did here, but they can’t prevent the coming progressive tsunami by exposing how hateful and prejudiced they are. They are just going to make matters worse for themselves and the Republican Party they are shilling for as America becomes more diverse. And maybe Democrats and progressives should welcome any actions they take to destroy their own Deplorable right-wing.

Fox & Friends willfully taking @staceyabrams out of context and running with the line that she's calling for an "illegal blue wave, an alien blue wave…a MS-13 blue wave"

I wonder why they're attacking someone who could be the first ever Black woman governor in the US. pic.twitter.com/WXsywYWZbK

It’s just about three weeks until the midterm elections that are forecasting a massive Blue Wave. Most campaign analysts agree that Democrats will secure a majority in the House of Representatives, and some believe the Senate is in play as well. Consequently, Fox News is pulling out all the stops to obstruct that outcome by loading up their schedule with Republican politicians and pundits sermonizing on the urgency of saving the Trump regime’s grip on unchallenged power. 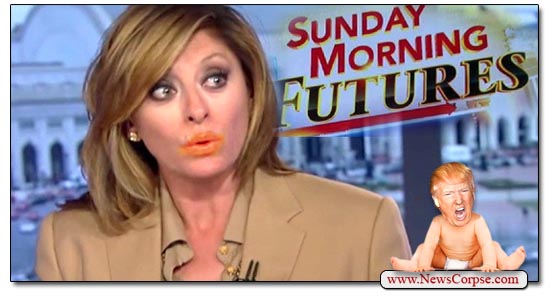 Republicans have abdicated their constitutional role as a check and balance on the other branches of government, particularly the executive branch. Instead, they have been brazenly shielding Trump and company from any legal accountability for their many crimes. And Fox News is aiding and abetting that betrayal of American values. Fox host Maria Bartiromo secured her status as the chief Sunday morning Trump-fluffer with an “interview” of Republican Leader Kevin McCarthy. The segment was pretty much a monologue by the GOP hack intended to boost Republican voter turnout and malign Democrats.

However, one subject dominated the discussion more than the typical gaslighting we’re accustomed to by Republicans. McCarthy raised his “real concern” about former New York City Mayor Michael Bloomberg’s donations to Democratic candidates (video below):

“There is a real concern that I have though, because Michael Bloomberg, if you watched who recently registered a Democrat, he is trying to buy the Democrat nomination to run against President Trump. So he has put in $80 million to try and win the House.”

Bartiromo, naturally, agreed with McCarthy. She went on to misstate the truth about which party is getting the most donations from average Americans, and she complained about “a handful of big, deep pocketed donors like a Michael Bloomberg, like a Tom Steyer.” McCarthy took that handoff and ran with it saying that:

“Just think the three individuals who are funding the Democratic Party. George Soros. You’ve got Michael Bloomberg, is not just $80 million into the House, he put another $20 million to try to win the senate. Then Tom Steyer. More than $120 million trying to win. But his main goal is trying to impeach President Trump. He brags that his impeachment list is bigger than the NRA list. Those three individuals are trying to buy our government in this process. It’s very disturbing.”

Why McCarthy correctly noted that there are more people supporting Trump’s impeachment than there are members of the NRA is puzzling, but appreciated. But more to the point, he itemized the contributions of some wealthy Democratic donors and noted how disturbed he was by it. And was it just a coincidence that all three of the rich Dems are Jewish?

What McCarthy didn’t bother to mention is that just one single wealthy donor to the Republicans, Charles Koch, is spending $400 million, more than the total McCarthy said was being donated by all of the Democratic supporters combined. And that isn’t even counting all the other GOP big money donors like the Adelsons and Uihleins. For some reason McCarthy and Bartiromo don’t find that disturbing.

Bartiromo goes on to praise a GOP campaign slogan saying “Build the wall, enforce the law. Yeah.” Then she gives McCarthy an open ended question about where Republicans are running close races with Democrats. And McCarthy took that baton and launched a two minute sprint of races that he wanted to promote on national television to an audience of obedient cult worshipers. It could not have been a more obvious contribution of valuable TV airtime to a political party than if it were branded with a big GOP elephant in place of the Fox News logo.

And this political assist to the Republican Party comes at just the right time. With the midterms approaching, Trump’s frequent cult rallies were boring the Fox News audience so much that Fox cut back on airing them live. The network was also losing a ton of ad revenue because Trump’s speeches could not be interrupted for commercial breaks. So to compensate for the loss of that TV exposure, Fox News is increasing their donations of airtime to GOP shills who will proselytize the right-wing doctrine in a more profitable, TV-friendly format. All in a desperate effort to stave off an electoral bloodbath next month that they probably can’t avoid. Well, as long as Democrats stay focused and turn out at the polls.