With all of the smarmy characters who populate Fox News, it is often difficult to focus on who stands out the most for their flagrant idiocy and boorishness. Is it Sean Hannity, personal friend and shadow chief of staff to Donald Trump? Is it the leader of Fox’s White Nationalist Brigade, Tucker Carlson? Do the Fox and Friends crew have an advantage due to the number of blowhards concentrated in one program? 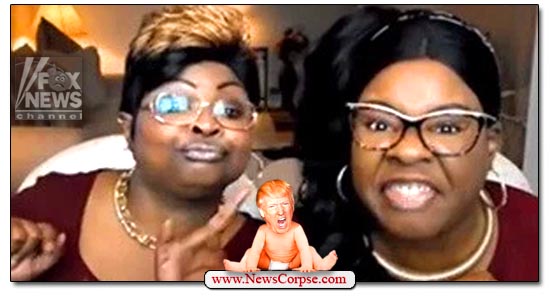 No doubt about it, the competition is fierce. But there are a couple of less prominent players who ceaselessly strive to outperform the the big shots at Fox News. The unintentional comedy duo of Diamond and Silk bring their “A” game every time they make an appearance. So long as the “A” stands for “asinine.” They are favorites of Trump who retweets them at every opportunity. And they outdid themselves on Friday morning while visiting the “Curvy Couch” potatoes of Fox and Friends.

The segment started off with a slur directed at Rep. Alexandria Ocasio-Cortez (AOC), who noted that the battle over climate change was not dissimilar to the civil rights battles of the past. Both involved people struggling to change the entrenched attitudes in society and government that were suppressing necessary change. But Diamond and Silk didn’t see it quite that way. they immediately lashed out at AOC saying…

“Listen, you have to realize that Alexandria Ocasio-Cortez, she’s reckless, she’s clueless, and she have a vacuous mindset. First of all, civil rights have nothing to do with climate change. First of all.”

OK. First of all, reckless, clueless, and vacuous are registered trademarks of Diamond and Silk Industries. But more to the point, that isn’t what AOC said. She wasn’t comparing the substance of the issues. She was comparing the struggles to educate people and effect change. However, although AOC wasn’t addressing it, there are areas where civil rights and climate change do intersect. Just ask anyone who lives in a low income community where government often places its biggest polluting industries. But Diamond (who does most of the talking while Silk nods and interjects “That’s right,” every few seconds) continued:

And then second of all, her Green New Deal is a green new scam that we must stay away from. Now, I know that she’s worried about climate change, but she need to talk to Mother Nature. Because with the Earth rotating at 1,000 miles per hour, OK, 365 days of the year, we subject to feel climate changing a little bit. But not to the tune where we have to dismantle everything and start the Earth back over again. It’s a absolutely no for us.”

It appears that she is defining climate change as the temperature variations between night and day. That’s the generous explanation for these crackpot comments. In reality, she’s just foaming at the mouth and spitting out irrelevancies that have no real meaning. They certainly aren’t descriptive of anything resembling the science of Earth’s climate. She closed this subject by somehow segueing to an accusation that Democrats are the party that opposes civil rights. Never mind that the Klan and other hate groups have universally endorsed Trump and his GOP.

Later in the segment the hosts played a clip of Beto O’Rourke pointing out the racist overtones that have been embedded in Trump’s policies and are central to his speeches. This spurred the Fox duo to declare that O’Rourke’s remarks reminded them of a slave owner because he supports humane immigration reform. Don’t even bother trying to figure that one out.

What’s most puzzling is that Fox News invites these members of their “news” contributor staff to offer an analysis of issues they obviously know nothing about. That’s something that Fox does frequently whether the topic is climate change or immigration or economics or national security. Somehow Diamond and Silk have impressed Fox’s editors and producers as experts on virtually every subject. So they are featured on multiple shows where they do their tired clown act that consists almost entirely of personal slurs and amens as if they were insult comics who became holy roller evangelists.

It’s old news that Fox is the home of bigoted hate mongers and right-wing propagandists. But it’s still somewhat surprising that they have allowed these two cringeworthy Trump-fluffers to overtake so much of their airtime. It’s a concession that they have given up any pretense as being an informational enterprise and are now openly embracing their role as a lowbrow entertainment medium. Which will make things even easier for their production staff. They never really cared much for doing research or fact-checking. And now they can dispense with it altogether.

The upcoming 2020 election is going to be at least a twenty ring circus. And the media will be serving as the Master of Ceremonies. Prominently featured in this extravaganza will be Fox News, who will make it their business to defend Donald Trump at every turn, while viciously and dishonestly attacking his critics. 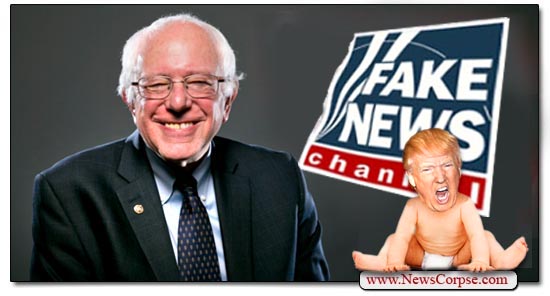 The Democratic National Committee made a wise decision not to let Fox News host any of their primary debates. Seeing as how Fox relentlessly maligns Democrats in the most despicable terms, it never made sense to consider them as debate partners. And on top of their constant smear campaigns, Fox’s audience is irredeemably hostile to the Democratic Party and its candidates.

So it was disconcerting to learn that Bernie Sanders has agreed to participate in a town hall on Fox News. There is absolutely no conceivable benefit to be realized by helping Fox News to belittle him, his ideas, and his (for the time being) party. Sanders appeared on The Daily Show Thursday night to defend his decision (video below). It didn’t go particularly well. The segment began with Trevor Noah asking why Sanders would go on Fox News after the DNC so righteously denounced them. He replied:

Trust me, I know Fox News. I know who they are and I know the role that they are playing. On the other hand, during the last campaign I did a town meeting with a fellow named Bret Baier who did it pretty fairly. He did it straightforwardly, and believe me, we went over the ground rules before and they kept their word. So to me it is important to distinguish Fox News from the many millions of people who watch Fox News.

Okay. Here’s the first problem. If Sanders really knew who Fox News is and what role they play, he wouldn’t be impressed with Baier’s pretense of fairness. No one thinks that whoever hosts the Fox town hall is going to bare his teeth and bark at Sanders like Sean Hannity or Jeanine Pirro would. But those characters would use the program as source material for their smear campaigns immediately afterward. Meanwhile, Fox News would use Sanders’ appearance to pretend they are fair and balanced and to leech credibility from him that they can’t earn on their own. And then Sanders continued:

I think it is important to talk to those people and say, ‘You know what? I know many of you voted for Donald Trump, but he lied to you. He told you, for example, he was going to provide healthcare to all people. Now he wants to throw thirty million people off the healthcare they have. He told you he was going to tax reform that would not benefit the wealthy. Eighty-three percent of the benefits go to the top one percent. So I think it is important to talk to Trump supporters and explain to them to what degree he has betrayed the working class of this country and lie during his campaign in terms of what he would do.

That’s a common sense response to the dishonest and regressive agenda that Trump and the GOP have forced onto the American people. Unfortunately, Fox News viewers have an unnatural aversion to common sense. It doesn’t matter how many times you tell them that Trump is lying, they won’t believe you. It’s the Primary Directive of cult management to insist that everyone but the cult is lying to you. Sanders would be wasting his time because the Fox audience will have predetermined that he is the liar and he’s only there to malign their messiah who is incapable of uttering a false word.

It has been established by numerous surveys that Fox News viewers are unalterably devoted to their conservative dogma, and since the advent of Trump, their loyalties are reserved for him exclusively. If Trump says that he’s already building a border wall (he hasn’t), they believe it. If he says that their taxes were lowered (they’re higher), they feel richer just listening to him. If he says that his healthcare plan (which doesn’t exist) is better and cheaper, they will rise from their Lazy-Boys and declare that they’ve been miraculously healed by his touch. They even believe that Trump was “totally exonerated” by a four page summary of the Mueller report that explicitly says there was no exoneration. Because that’s what Trump told them. And even Fox News can’t shake them from their slobbering devotion.

That’s not an audience that Sanders can have any effect on. He’s wasting his time speaking to them. They will only watch to gather reasons to hate him and the “socialist” Democratic Party more than ever. And the post-town hall analyses by Hannity, Tucker Carlson, Laura Ingraham, and the “Curvy Couch” potatoes of Fox and Friends, will inform their own hostile reactions for days to come. Hopefully no other Democrats will follow in the misguided footsteps of Sanders by subjugating themselves to Fox News.