The rapid and public decline in Donald Trump’s mental state is a frightening display of the fragility of his mind and cognitive infirmity. Many professionals in the psychiatric field have observed Trump’s swindling awareness of reality and concluded that he is unfit to manage a Burger King, much less serve as president.

On Tuesday Trump validated the diagnoses of his mental failure during a press avail with President Sisi of Egypt. When reporters asked Trump about his administration’s policy of separating immigrant families, he launched into an utterly deranged tirade denying his own policy and lashing out at President Obama over and over again:

That’s about as solid an exhibition of total insanity as you’re likely to see unfold on live TV. Trump name-checked Obama five times in that short paragraph, as if possessed by rabid anti-Obama demons. And each time he associated Obama with a practice of child separation that was demonstrably false. The Obama administration only held children when they crossed the border alone, or when their parents were accused of felonies. It was the Trump administration that created the policy of separating families of asylum seekers, and they even admitted that it was done as a “deterrent.” Nearly a year ago News Corpse wrote this:

“‘If you don’t want your child separated,’ said Attorney General Jeff Sessions, ‘then don’t bring them across the border illegally.’ Of course, these asylum seekers are not breaking any laws. And speaking about family separation, Trump’s Chief of Staff, John Kelly, said ‘A big name of the game is deterrence [and] it could be a tough deterrent.’ In both cases they are advocating cruelty and human rights abuse as a deterrent for a civil border violation.”

So in a bizarre way, Trump is criticizing Obama for being tougher on immigrants than he is. Even though Obama didn’t do what Trump claimed and Trump now denies doing it himself. What makes this especially demented is that Trump also praises the policy that he says isn’t his:

“Now I’ll tell you something, once you don’t have it, that’s why you see many more people coming. They’re coming like it’s a picnic because ‘Let’s go to Disneyland.’ President Obama separated children. They had child separation. I was the one that changed it.”

So in Trump’s analysis, the policy works because fewer immigrants come to the U.S. when it’s in place. So is he for or against it now? And obviously it was in place or else how would he know that it worked? Trump also contradicts himself with ludicrous visions of a migration amusement park. It’s just a good old time for these families who are fleeing poverty and violence by walking hundreds of miles with nothing but the clothes on their backs. I’m surprised Disneyland hasn’t already built their Asylum Land attraction.

The evidence that Trump is a very sick man just continues to pile up. And his condition seems to be worsening more quickly every day. He can’t manage to get through any public statement without misstating where his father was from or some absurd ravings about windmill cancer. And the video of these latest remarks is almost too painful to watch.

There’s one thing that Donald Trump can look forward to every day. That’s the morning broadcast of his favorite Fox News program Fox and Friends. The easily predictable three hours of Trump-fluffing and Democrat bashing makes it possible for him to face the day despite his multiplying political and legal woes. 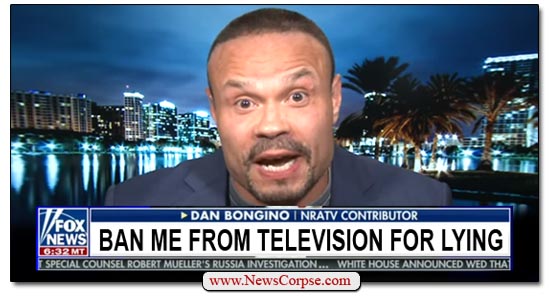 On Tuesday morning’s episode, the “Curvy Couch” potatoes were joined by a frequent guest, Dan Bongino. He is the male version of Fox’s senior harpie, Jeanine Pirro. And in this segment he surely didn’t disappoint the President with his bombastic brown nosing and rabid conspiratorial crackpottery. In a discussion about Trump’s nefarious associations with Russia and the pending release of the report by special counsel Robert Mueller, Bongino unleashed a rancid rant (video below) that was impressive in how he kept the drool from smearing his notes:

“This is what I cannot believe about these two discredited conspiracy theorist hacks. Number one, why are they even allowed on television anymore – Adam Schiff and Jerry Nadler, and Eric Swalwell for that matter? And I’m being serious. They have lied to people over and over about collusion in plain sight and evidence they have never, ever produced. There is no evidence of collusion.

Well, that was jam packed with delusion and dishonesty. First of all, representatives Schiff, Nadler, and Swalwell have presented piles of evidence that Trump conspired with Russia and then obstructed the investigation into his activities. In fact, all of America saw him meeting with Russians in the Oval Office, and his son and campaign chairman met with other Russians in Trump Tower. Trump also admitted on television that he fired FBI Director James Comey because of “the Russia thing.”

Bongino’s deflection to accuse Hillary Clinton of collusion is a familiar Republican trope. But it is wholly fabricated from bits of data that contain zero evidence of wrongdoing. They assert that because her campaign partly paid for the infamous Steele dossier, that she was connected to Russian operatives. She wasn’t. Even Christopher Steele’s sources were Russian dissidents who were not connected to the Kremlin.

Most disturbing is Bongino’s loony claim that members of Congress should be prohibited from appearing on TV. His justification for that is his assertion that they lied about Trump’s adventures with Russians. But Bongino can’t cite a single thing they said that wasn’t true.

What makes this fairly hysterical is that Bongino is setting a standard for television appearances that would prevent Trump from ever being on. After all, he has been documented to have lied more than 9,000 times since his inauguration. And that prohibition would also have to extend to Sarah Huckabee Sanders, Kellyanne Conway, and most of the rest of the Trump Nationalist Party. And let’s not leave out serial liar, Dan Bongino.

So, all things considered, Bongino may have a good point. Let’s add up all times that people have deliberately lied on TV and make that the basis for whether they can continue to be booked on news programs. The only problem with that is that it would let Fox “News” off the hook since they have nothing to do with news.