What do you do as a follow up after killing an unarmed teenager and getting off with no punishment whatsoever? Well, If you’re George Zimmerman you start out by domestically abusing your girlfriends and then proceed to perpetrating an eBay hoax to net yourself a cool hundred grand.

Trayvon Martin’s killer is in the news again, this time because he has posted for sale on eBay something he calls an “original” painting. However, there appears to be something fishy about the whole thing. 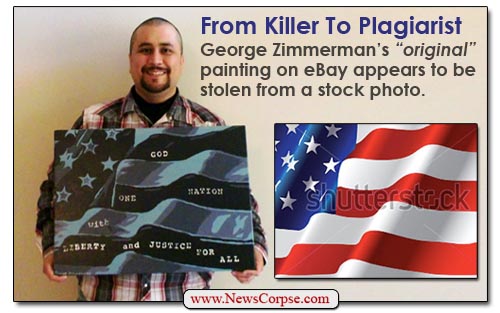 The picture that Zimmerman claims to be an original, hand-painted work of art looks suspiciously like a stock photo from Shutterstock. It has undergone a bit of modification through standard Photoshop filters, but it is clearly a derivative work and there is no attribution or credit for the source. In fact, Zimmerman signed it as his own and made this statement on eBay:

“First hand painted artwork by me, George Zimmerman. Everyone has been asking what I have been doing with myself. I found a creative, way to express myself, my emotions and the symbols that represent my experiences. My art work allows me to reflect, providing a therapeutic outlet and allows me to remain indoors.”

Apparently Zimmerman believes that copying someone else’s artwork is a creative way to express himself and that plagiarism is a therapeutic outlet.

As of the publishing of this article, the bid for Zimmerman’s item is at $110,000. That’s a pretty sweet deal for a work that seems to be a copyright violation. The folks at Shutterstock will probably be interested in this if it actually sells. As will the buyer, unless it is someone who is seeking to funnel funds to Zimmerman through some backdoor, anonymous channel. After all, there is something awfully suspicious about anyone assigning a value this high to a Zimmerman knockoff.

Zimmerman has responded to a few questions on eBay from supporters who express their admiration for him as a hero. In one such response, Zimmerman attacks the people (including Trayvon’s family) who sought to hold him accountable for the shooting death of a kid walking home from the market with an iced tea and a bag of Skittles. Zimmerman says that…

“The system is broken, an innocent man should not spend one second without his God given liberty, solely because a small sect of uneducated loud mouths.”

For someone who has been in trouble with the law on several occasions since his famous acquittal, Zimmerman has an abundance of gall to insult the family of his victim and the civil libertarians who believe that a teenager’s death should not be swept under a legal carpet. And for him to come out with what appears to be a plagiarized work of “art” in an effort of profit from his infamy, and another family’s tragedy, is further evidence of his depraved character.

eBay should not permit this auction to proceed. It is an affront to a family still in mourning and a violation of the copyright of Shutterstock and the artist who provided the original work. Should the auction conclude, the funds should be sequestered and held until the resolution of any wrongful death suits that may be filed by Trayvon’s family.

[Update 5:52pm:] There have been a dozen canceled/retracted bids so far today, bringing it down 10 grand, but it’s current bid is still above $100,000. Some rich, sick individual obviously wants to give this killer a gift. I wonder who.

15 thoughts on “George Zimmerman: From Killer To Plagiarizing Scam Artist?”