NOT BREAKING NEWS: No one is going to have to interrupt regular programming to announce that Fox News is overflowing with hypocrisy, but their latest example of it is a delicious foray into obliviousness on a grand scale.

This week New York governor Andrew Cuomo told a radio interviewer that “extreme” conservatives have “no place in the state of New York.” The statement was immediately picked up by every right-wing media outlet and reported with the typical context-extracted zeal for which the wingnut media is so well known. Cuomo’s full remarks reveal that he was referring only to politicians and candidates who embrace far-right fringe opinions, not mainstream Republican citizens of New York. Here is what he said:

The gist of his commentary is plainly true. New York is not, in general, a state that will welcome politicos who advocate assault weapons and hate homosexuals. And with regard to reproductive choice, even conservative New Yorkers do not sway so far left that they would favor indicting doctors and mothers for murder.

Nevertheless, conservatives nationwide took Cuomo’s words to heart and feverishly sought to imply that he was referring to, and insulting, all Republicans. It’s interesting that they would all classify themselves as extremists in order to be included in Cuomo’s criticism. This includes Sean Hannity who threatened to leave New York. Of course, most New Yorkers would volunteer to help him pack. Glenn Beck also chimed in with his standard Nazi-inflected rhetoric, saying that Cuomo’s remarks were similar to those that led to the Holocaust. Then he went further than Hannity, who merely threatened to leave the state. Beck actually threatened to renounce his American citizenship (video below).

Not surprisingly, Fox News was all over this phony controversy. The have run numerous segments portraying Cuomo as intolerant of diversity and berating him for offending his conservative constituents, about whom he was not talking. Beck himself made a rare appearance on Fox with Megyn Kelly where the two of them joined to misinterpret Cuomo’s remarks. But it was only one year ago that Fox News promoted a right-wing group’s plan to build a conservative utopia somewhere in Idaho that explicitly forbade liberals. The Fox Nation headline blared “No Liberals Allowed.” 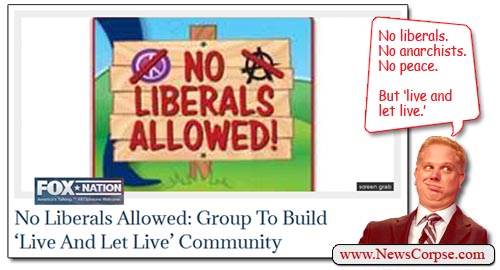 Get your copy of Fox Nation vs. Reality today at Amazon

It’s almost too easy to mock this. Notice that on the same graphic as their prohibition against liberals they say “Live And Let Live.” I guess they mean unless you’re a liberal. And contrary to Cuomo, this cult conclave was specifically referring to ordinary citizens with progressive views. The graphic also has icons indicating that there will be no anarchy or peace tolerated in their Randian haven. The website formally discourages prospective liberal applicants saying that they “will likely find that life in our community is incompatible with their existing ideology and preferred lifestyles.”

Glenn Beck, by the way, is also in the utopia business. His Armageddon getaway will be called Independence, USA. Always the entertainer, he is positioning it as a hybrid conservative village/theme park with shops, rides, media studios, and residential tracts. However, like most projects initiated by Beck, this one will also never see the light of day.

The rampant public displays of outrage that emanate from Fox News always have at least a hint of hypocrisy. But when they venture this far into the hypocritical swamp it becomes more comic relief than anything else. The acrimony they hope to incite by deliberately misrepresenting Cuomo’s comments is only made more absurd by the fact that their own advocacy of intolerance is even worse. Lucky for them, their audience is populated by imbeciles who will never put this all together. Their business model works because it requires low-intellect consumers and Fox just keeps making more of them everyday.